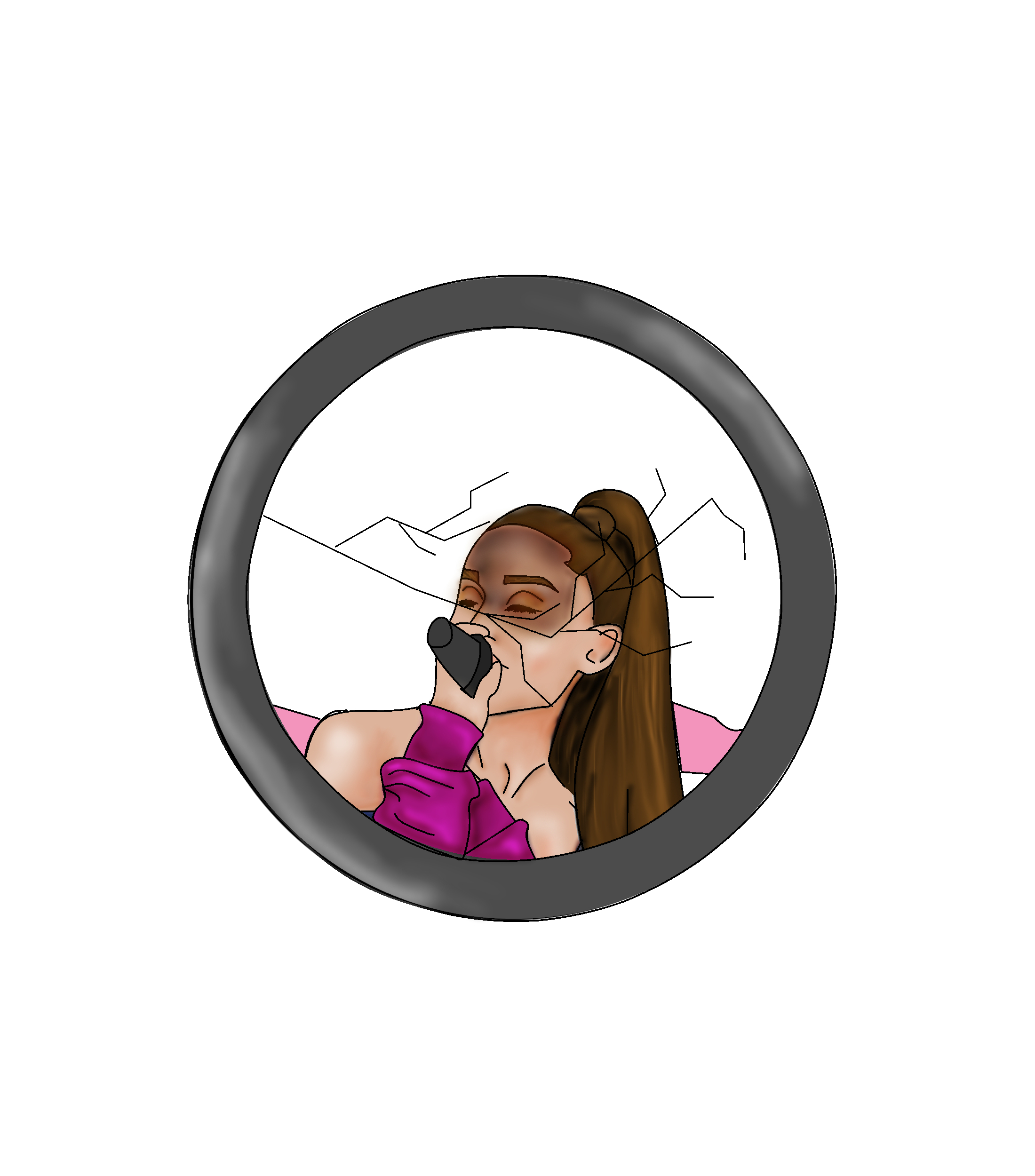 Cut to a pink spray-painted car with a “7” graffitied on its window. A crew of women in street-style fashion chill on the porch of a pink house drenched in bright neon purple and pink light. In the midst of it all is Ariana Grande, her frosty purple lipstick shining as bright as the diamonds on her neck.

A little over a month after her last release, “imagine,” pop princess Ariana Grande dropped her latest single and music video, “7 Rings.” Where “imagine” was a steamy song of wistful denial, “7 Rings” is a trap-based reworking of “My Favorite Things” from The Sound of Music. Reminiscent of countless rappers, Grande flaunts her riches and a bad bitch energy.

But, like “imagine,” Grande has “borrowed” from Japanese culture and language for “7 Rings.” In the video, Japanese appears underneath the song title a few seconds into the video. The set is decorated with Japanese anime-like characters and bottles of sake, and blurred katakana flashes onto the screen at seemingly random intervals. The marketing for both songs utilized Japanese and a kind of Harajuku aesthetic, plastering Grande’s Instagram with captions in Japanese and the words “7 Rings” spelled out in katakana-looking English.

At first, with “imagine,” it seemed like Grande was simply taking inspiration from the neon, eccentric Harajuku culture, having taken lessons to learn Japanese for some time. While the song has nothing to do with Japanese culture (and the lyric video merely adopted a kind of glitchy vaporwave feel), my initial thought was, “How cool! A mainstream artist is using Japanese culture, this’ll help break down the idea that only weeaboos speak Japanese!”

But “7 Rings” is a whole different creature, essentially toeing the line between cultural appreciation and appropriation. Rather than feeling like a respectful appreciation for the culture, the marketing for “7 Rings” and the song itself felt like a blatant use of Japanese culture as a purely aesthetic accessory. The language was shaped to spell English words just to look cool, meant to project an anime-like kawaii (“cute” in Japanese) image. Grande has found immense success in cherry-picking the elements of Harajuku culture for her song — but this isn’t the first time she’s done this.

This is part of a bigger problem — one more to add to Grande’s growing list of cultural misdemeanors. From the blatant darkness of her tan to her adoption of AAVE and a mimicry of a “blaccent,” Grande’s appropriation of black culture is consistent and unaddressed. She sings an old song: one of appropriating black culture to appear “edgy” or mature without any of the associated stereotypes or difficulties. We’ve seen it before with Iggy Azalea and Miley Cyrus; utilizing the style of black artists is a common trademark of white pop musicians seeking to project an image of maturity and growth — a movement away from sweet, innocent pop to something more raunchy and tough and “mature.” There is something inherently problematic with taking black stereotypes and using them to project an image of toughness, adultness, and sexual deviance, especially on such an enormous and visible platform. In the case of “7 Rings,” Grande has been accused of copying three black artists: 2 Chainz and his pink trap house aesthetic; Princess Nokia’s song “Mine,” a song that celebrates women of color and their relationship with their hair; and Soulja Boy’s flow from “Pretty Boy Swag,” a rap song with a chipped flow and choppy lyrics. The line “You like my hair, gee thanks, just bought it” in particular takes the complicated relationship between women of color and their hair and puts in the context of “flexing,” and Grande is praised for it whereas women of color are not. To be frank, this is a clear example of white privilege. White privilege is using Japanese culture as an accessory for the aesthetic and being praised for being “original.” White privilege is using black culture and sound without any actual repercussions of being black.

Now, all this isn’t to say we should “cancel” Ariana Grande or publicly shame her. For her, this past year was about as painful and sad as it can get, and piling on harsh critique is not kind nor is it right. As a longtime fan, I’ve found power in her transformation and marveled at her ability to emerge empathetic, loving, and kind. I’ve appreciated seeing her relate to and take inspiration from my culture — to be entirely honest, I was excited and happy. But this is not an excuse to continue appropriating people of color. As more of the public becomes more aware of Ariana Grande’s actions, I can only hope that, on the line between cultural appreciation and appropriation, that she leans more onto the former.