Curiosity rover explores the history of water on Mars 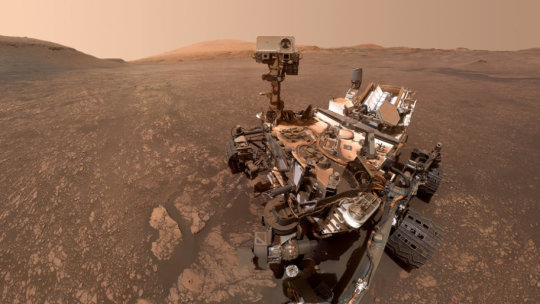 Billions of years ago, the floor of the Gale Crater was likely an ancient oasis, according to the latest telemetry from NASA’s Curiosity rover on Mars. But today, the rover is exploring the dry rocks and mineral salts that remain from this once lively region. In a paper published in Nature Geoscience this week, Curiosity scientists piece together the data sent back from Mars to discover the cycle of water flow through the crater over the eons.

The Gale Crater was created when a massive impact occurred on the surface of Mars, with sediment carried into the crater by water and wind in the following years. Weathering effects also created Mount Sharp, where each layer of bare rock reveals something about a period of Martian history.

Lead author William Rapin of the California Institute of Technology said in a press release, “we went to Gale Crater because it preserves this unique record of a changing Mars. Understanding when and how the planet's climate started evolving is a piece of another puzzle: When and how long was Mars capable of supporting microbial life at the surface?”

Curiosity had previously explored a nearby 150-meter-tall stack of sedimentary rocks known as Sutton Island as well as mud cracks called Old Soaker in 2017, showing that once-submerged regions of the planet underwent dry cycles as the water concentrated into brine. Lakes usually leave pure salt crystals behind when they dry up, but those on Sutton Island are highly sedimentary, betraying the fact that the environment was once full of shallow ponds filled with briny water.

According to Rapin, patterns of change on Mars are closely related to those on Earth due to the similarity of the planets in their early days. For example, saline lakes on South America’s Altiplano may be undergoing a similar process to Sutton Island on Mars. “During drier periods, the Altiplano lakes become shallower, and some can dry out completely,” Rapin said. “The fact that they're vegetation-free even makes them look a little like Mars.”

Similarly, the sediment deposits on the floor of the Gale Crater tell a story of how the Martian environment gradually transitioned from wet to a freezing desert, which is its current state. Ashwin Vasavada is a scientist on the Curiosity project at NASA’s Jet Propulsion Laboratory in Pasadena, CA, which leads the Mars Science Laboratory that owns Curiosity. In a press release, he said, “As we climb Mount Sharp, we see an overall trend from a wet landscape to a drier one. But that trend didn't necessarily occur in a linear fashion. More likely, it was messy, including drier periods, like what we're seeing at Sutton Island, followed by wetter periods, like what we're seeing in the ‘clay-bearing unit’ that Curiosity is exploring today.”

While future exploration will reveal more details about the history of Mars’ surface, the latest findings may indicate that for much of the past several billion years, the planet may be have dominated by shallow lakes and streams. In the future, scientists may be telling a similar story about Earth.