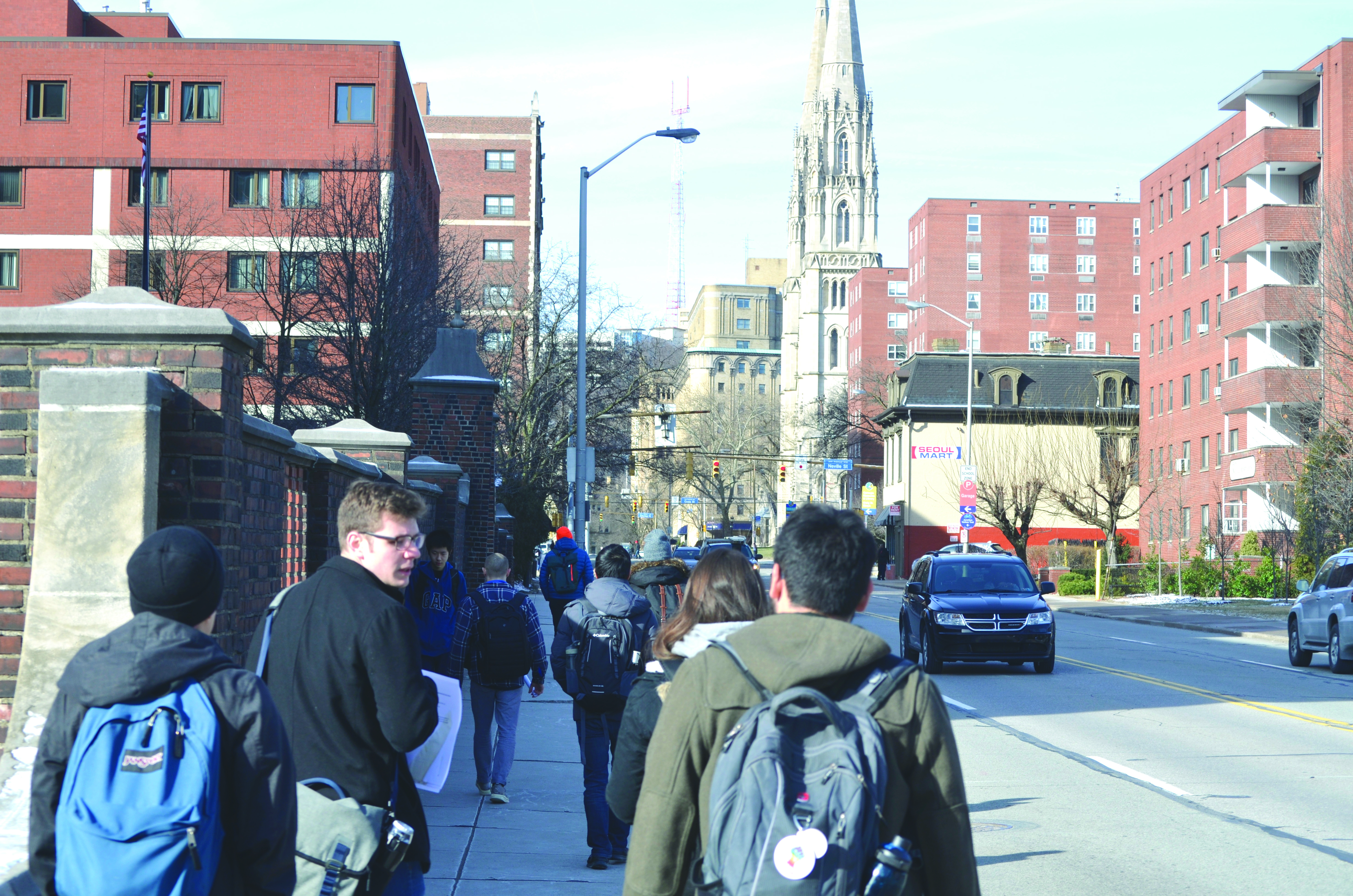 The student delegation in support of Chartwells employees walks to meet with Dining Services and deliver their signed petition. (credit: Nora Mattson/Editor-in-Chief)

An agreement was reached on Feb. 13 between The Service Employees International Union, Local 32BJ, (SIEU 32BJ) and Chartwells to bring back all five of the full-time food service positions that had been cut. The jobs were reposted, and the number of full-time union jobs offered by Chartwells is back up to the level of the fall semester, at 118 workers.

This past Tuesday, a delegation comprised of students visited the offices of Director of Dining Services Pascal Petter and Resident District Manager for Chartwells at Carnegie Mellon Jeff Sinciline to deliver a petition in support of keeping the jobs. A delegation of employees took a similar trek on Jan. 3.

Both delegations emphasized that they wanted Chartwells to continue to comply with Article 8 of the union contract, which states that full time workers must be given priority over part time workers if it ever comes time to make layoffs. As The Tartan reported two weeks ago, the five full time employees’ jobs came under threat at the same time that Chartwells was increasing part time hiring, allowing them to hire workers without the same benefits that a full time worker would be granted.

The Tartan spoke with Elizabeth Stanton, who has worked at Carnegie Mellon for over 14 years and currently works in the Heinz Cafe in Hamburg Hall, about why she chose to participate in the employee’s delegation.

Stanton told The Tartan that it was important to deliver the message in person because it would allow people to see the different situations of Chartwells workers. Stanton has a lung disease that requires her to use tanks of oxygen, whose costs would be prohibitive should they have to be paid out of pocket if she lost benefits upon a loss of full-time employment.

Traci Benjamin, a Communications Specialist for the SIEU 32BJ, told The Tartan, that “not every service worker is represented” and that the delegation was also meant to encourage elevating the conditions of part time workers who are not represented by the union.

“What worked was that we all came together as a unit,” said Stanton, citing a petition that students circulated. Though she is glad that “everything is resolved” she noted that in the 32 years her mother has worked as a food service worker at Carnegie Mellon, she could not remember a similar round of layoffs in breach of union contract, which she noted happened in the first year of the new contract with Chartwells.

The petition, created by junior chemical engineering major Lavonca Davis, received 315 signatures online from students, faculty and staff, and was delivered by the delegations to Petter and Sinciline. It cites Carnegie Mellon’s 2025 strategic plan, which asks community members to “continue to set a tone at all levels of leadership that stresses the critical importance of diversity, and hold university leaders and community members accountable for progress.”

Davis, who was also a lead organizer of the student delegation, stated that “The purpose of the delegations were to make Pascal Petter and Jeff [Sinciline] aware that we, the students, support the food service workers on campus. They all work very hard to feed us and keep us happy, and they deserve to be respected.” She said that the delegation was inspired by the worker’s delegation and drew on guidance from union organizers.

The student delegation, which happened after the jobs were restored, emphasized their continued commitment to ensuring that Chartwells continued to comply with union contracts, and asked the university to pressure Chartwells to do so.

As sophomore Artificial Intelligence and Hispanic Studies major Rebecca Rovins read from a prepared statement in Petter’s office, “We would like to acknowledge and thank the University for their help in encouraging Chartwell to restore the several employees that were illegally and unfairly laid off... it is, however, unfortunate it took almost two months to resolve this problem.”

The seven students in the delegation were a mix of graduate and undergraduate students who stressed their connection to a variety of student organizations across campus.
Daniel Sun, a Ph.D. candidate in Engineering and Public Policy and a part of the committee to select Chartwells as the new vendor, told Petter in his office the committee had emphasized good labor practices from potential vendors and that he was “extremely disappointed as a member of that committee that this happened in the first place.”

Petter, Director of Dining Services, told The Tartan that Carnegie Mellon’s contract with Chartwells did not permit them to be involved in the negotiations, but the student delegation showed “Carnegie Mellon’s community thrives due to the passion and engagement of students on important societal concerns,” and said that the university would “continue to serve as an independent voice” in future labor disputes.

Sinciline gave a statement that Chartwells was “pleased” that the union and Chartwells came to an agreement and credited the capacity to maintain the level of full time employment to the new Tartan Express grilled cheese truck. Chartwells, he said, “believes in fostering a culture of open communication and values the feedback of our employees” and has agreed to continue to meet with the union to hear concerns.

Stanton said that the student she interacts with on the job are “like [her] family,” since they have come to know each other in their interactions every day, and she is grateful that the students “[came] behind us.” Davis cites the development of the relationship between workers and employees as a potential outcome of these delegations, but junior Jorge Alvarez, who was in the delegation, stated “I wish that more students at Carnegie Mellon would want to participate.”