Walking To The Sky is missing a person. Where'd he walk off to? 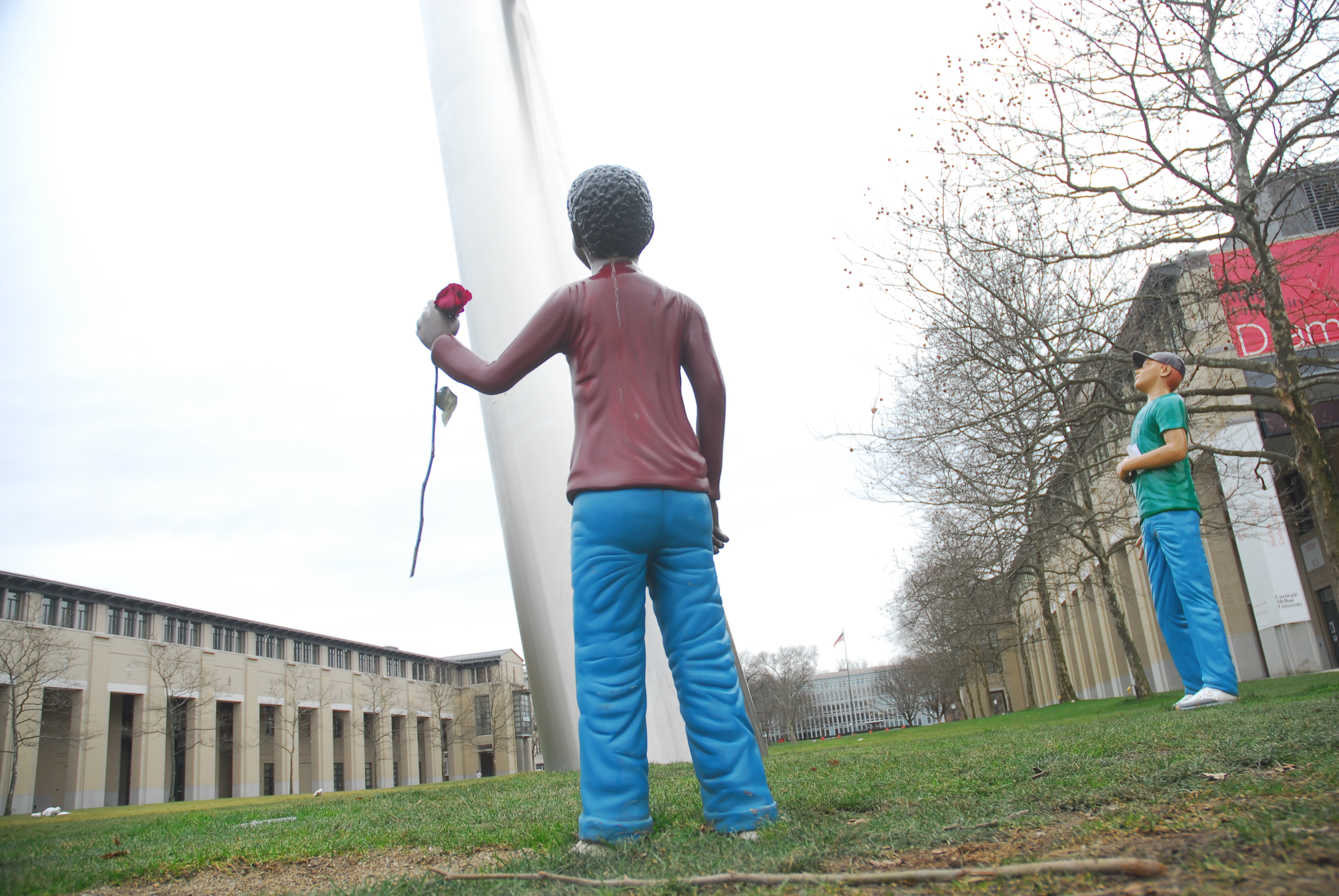 The young man who usually holds hands with *Walking to the Sky's* currently missing figure holds a rose, placed in his hand on Valentine's day. (credit: Adam Tunnard/News Editor)

Over the past 13 years, the 100-foot stainless steel pole in front of Warner Hall has become a distinctive part of Carnegie Mellon University. The people who ‘walk up to the sky’ command the attention of anyone entering Carnegie Mellon from Forbes Avenue, often the first thing visitors see on campus. But since winter break, Walking to the Sky has been missing one of its pieces.

One of the men at the base of the sculpture, made by Carnegie Mellon alum Jonathan Borofsky, is gone, leaving the child he typically holds hands with giving an awkward wave. Only a patch of dirt marks where he once stood. The missing man has garnered a fan account on Instagram, but students do not seem to know his location.

It is just another small turn in the story of Walking to the Sky, as the sculpture has previously had some missing parts. In Oct. 2009, three years after the statue was installed, The Tartan reported that the statue had “swayed several feet back and forth.” At that time, most of the figures on the pole were removed while the statue’s replacement was built. Shortly after, the statue was disassembled, and eventually replaced with the tapered pole that remains on campus today.

However, this time only one of the figures of the statue has been removed, and the statue is not due for any replacement. Despite his absence from the sculpture, College of Fine Arts Dean Dan Martin made it clear to The Tartan that the figure is fully accounted for. “From time to time, outdoor public art pieces need touching up,” he said, “Since 2006, several of the figures of Walking to the Sky have been removed for repairs or refreshing.”

The PAC was established in Feb. 2006 because of controversies involving the statue. The original Walking to the Sky was built in the Rockefeller Center in New York City in 2004 and later moved to the Nasher Sculpture Center in Dallas, Texas. Alumni Jill and Peter Kraus, who also donated towards the Kraus Campo (better known as the “Numbers Garden”), donated the funds for Carnegie Mellon to build a replica of Borofsky's Dallas Walking to the Sky on campus in 2005. The statue was originally planned to go between Baker and Doherty Halls.

The sculpture’s presence on campus has been controversial from the start, with some students, (like the Editorial Board at The Tartan), questioning the decision and complaining that they were being left out of the decision-making process. Though the statue was already approved to be built on campus, the creation PAC was proposed by former Dean of the College of Fine Arts Hilary Robinson as part of a compromise so students could give input on campus art.

The committee then held a forum on the site of the statue. The Tartan Board reported in March 2006 that the committee got “a chorus of ‘no’s” when they asked if the audience approved of its site in front of Warner Hall. However, Robinson claimed in an interview with The Tartan that she had the audience’s support in recommending that site to former Carnegie Mellon President, Jared Cohon.

Despite the controversy, university officials and Borofsky were glad to finally bring the statue to campus permanently. President Cohon said at the time, “We are delighted that it has come to our campus and are grateful to Jonathan Borofsky and to Jill and Peter Kraus for making this possible.”

With an already convoluted history, the disappearing statue is really just a small part of the campus fixture’s story. As for the missing figure, Martin says, “I expect the young man will be back in place very soon.”