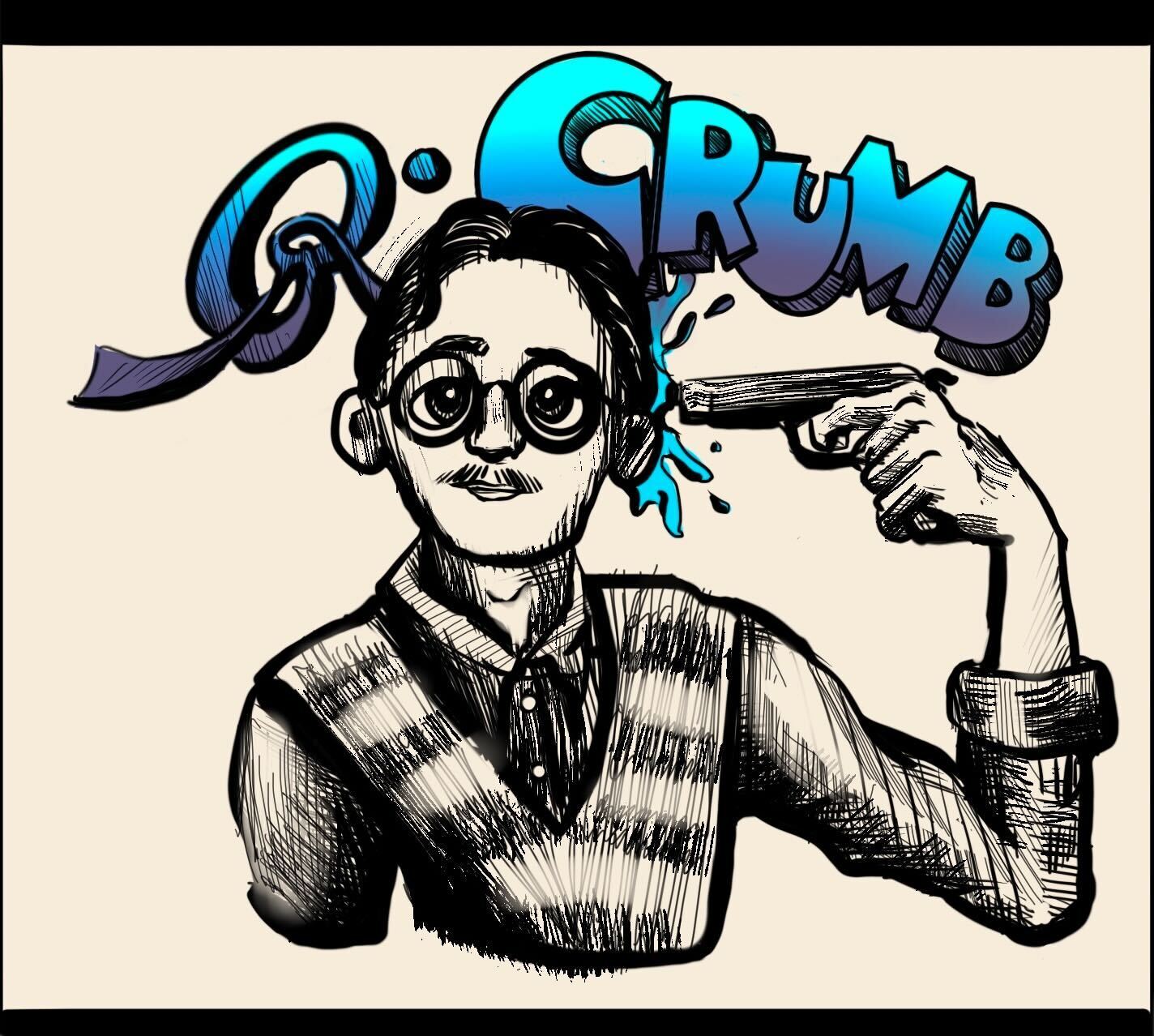 Robert Crumb has been called many things, and he doesn’t seem to let it bother him: a racist (most strongly with his character of Angelfood McSpade) - “Oh yeah, but it all came from white liberals”; a foot fetishist - “I’m not fixated on feet, but I can get into them”; a misogynist - “I would be lying if I said I had no beef with the female of the species.”; and much more. He has been a cartoonist basically his whole life, and has made many works, both famous and infamous. He created Fritz the Cat, the cover of “Cheap Thrills”, and “Keep On Truckin,” the one-page comic emblematic of a hippie era. He’s supremely controversial, he’s wildly successful, he’s a great artist, and he’s one of the subjects of Terry Zwigoff’s acclaimed documentary "Crumb." The documentary, while superficially just about Crumb, also includes some of the rest of his family. We get to see brief snippets of his relationships with his son and fellow cartoonist Jesse Crumb, and his young daughter Sophie Crumb (described by Crumb as the only woman he’s ever loved.) We get frequent interviews with his wives and ex-girlfriends, which expose us to his sexual nature. He seems incredibly shy, yet is still very touchy in ways that can sometimes appear to make these women uncomfortable. He can in fact often seem uncomfortable with himself. When Dian Hanson, editor of various pornographic magazines and friend of Crumb, organizes a photoshoot for Crumb with some of her models that seem ripped straight from Crumb’s comix, we see how uncomfortable he is, demonstrating that his extreme depictions of women that we discuss later might be, although obviously sexually fetishistic for himself, also critiques of misogynistic values permeating the culture that Robert Crumb grew up in.

Robert Crumb is perhaps most infamous for the unique way he illustrated women in his comics. He frequently draws variations on what he calls the “Perfect Female Body.” This “Perfect Female Body according to the personal obsessions of R. Crumb” has many traits, including, ”Big lips full of teeth; Strong, straight back, strong neck & shoulders; Firm Breasts, size unimportant; Strong Arms; Round, full belly; Thick Ankles,” and most importantly: ”Large thighs, exaggerated forward pelvic thrust; and Exceptionally large, well-endowed but firm buttocks with ‘shelf’ effect.” He has an obsession with piggy back rides. The documentary shows multiple comics of his with his creations mounted on the backs of women, and we even see him be taken for a real life piggy back ride on the back of a former lover. All of this extreme illustration can be seen as misogynistic and reductionary. However, the women interviewed in "Crumb" often seem to have praise for this fixation of his, saying that it was the first time they felt represented and seen sexually. Crumb doesn’t only draw women in this way, as we see many instances

Crumb has been especially criticized for his often decapitation of women in his comics. Not literally, but the women he draws in stories are often headless, which can be seen as even more demeaning of women, female characters that he is most frequently putting in grotesque sexual situations. Is this satire on the role of women in the 60s, or is this demonstrations of a purely sexual nature? In this complex question, the answer seems to be both. Robert Crumb obviously and freely admits to getting off — at least on some level — to his work, but he also claims to be working in satire, and relatively obvious satire at that. Finally, we can see that Crumb puts much of himself into these comix, and that they can be seen as him making art about his worst traits.

But what is the difference between the Robert Crumb featured in his comix, and Robert Crumb the person? In some ways, there is very little. He has similar obsessions and draws himself very similarly. When Dian Hanson is asked about one of the similarities, she explains: “Yeah, that is one part that is very true. He is endowed with one of the biggest penises in the world.” But Crumb is not just this sexual being; he contains multitudes. When his art isn’t disgustingly sexual, he can make something like “Short History of America,” an introspective page detailing the rise of an American city, and what it left behind, with deep sentimentality. Or his famous comic “The Religious Experience of Philip K. Dick,” published in Weirdo #17, and maybe the definitive description of Dick’s VALIS incident, apart from Dick’s own writings. Crumb has an extreme attention to detail with everything he draws, and a focus on just his most obscene comix belies his true talents. The simple portraits that we see him making during the documentary are stunning, and he holds strongly consistent views, much more than many of his contemporaries in the scene. He doesn’t like to give autographs, and decries a modern culture that is “one unified field of bought and sold market research.” He has also been described as having “Such a sweet romantic vision of things” by Dana Morgan, his first wife.

Crumb is a man who has won. His wife, fellow cartoonist Aline Kominsky-Crumb, looks like Crumb’s ideal woman. He has reached the top of his field, adoration from fans, a position in the Will Eisner Award Hall of Fame. But what of the rest of the Crumbs?

From what we see, the three Crumb brothers are all immensely talented cartoonists, but only Robert got immense success and popularity. So what happened to older brother Charles, and younger brother Maxon?

Well, all three brothers lived in a bad family situation. Their father was abusive, and their mother abused amphetamines, diet pills, and may have “Threatened to give [the brothers] enemas if [they] didn’t behave properly.” The brothers were all interested in cartooning, and were all shy and unpopular. Robert managed to leave his home after highschool, but Charles stayed. Charles was mentally ill, and claimed to have “homosexual pedophiliac tendancies” that he never acted upon. His art is interesting in its similarities to Robert’s work, but differentiates itself with interesting lines drawn inside the subjects that fill all the white space. Before the release of “Crumb,” Charles killed himself.

The younger brother Maxon had a history of sexually assaulting women, one that he describes almost as an afterthought in “Crumb.” We see him interviewed in a bare and decrepit apartment, where he shows his drawings, stylistically differentiated from those of the other Crumbs. He practices Buddhist meditation on a bed of nails, and we see him swallowing a rope of cloth to “cleanse his intestines,” which he passes through his entire body over the course of three days every six weeks.

"Crumb" by Terry Zwigoff is supremely fascinating. A viewing shows you so much about this scene, and all these incredibly compelling characters. It begets more. I haven’t described fully how fascinating Crumb and his family is, and I don’t think a full description of them is possible without just seeing the documentary. We are shown these people with a revealing honesty. Everyone should see this documentary, even those with absolutely no interest in the Comix scene. Zwigoff truly made a masterpiece. It is free to watch on the Internet Archive.