Champions League round of 16 recap 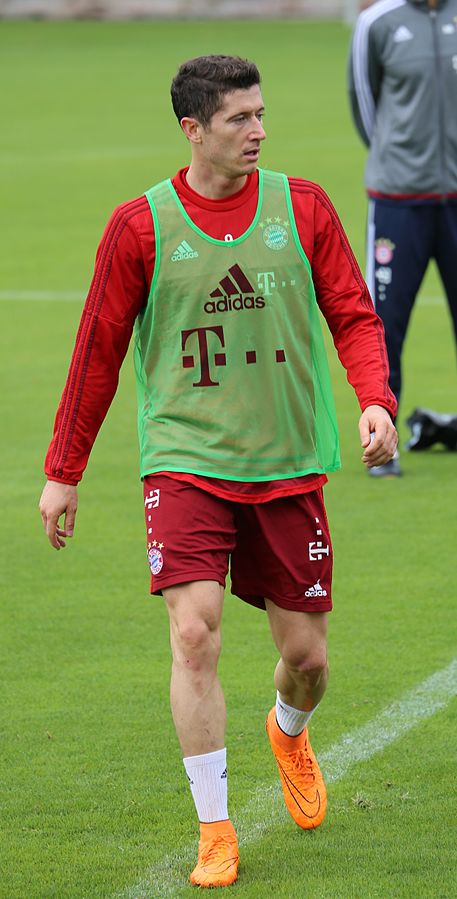 With his hat-trick in Bayern’s 7-1 match versus Salzburg, Lewandowski has become the top scorer in this year’s Champions League with 12 goals so far. (credit: Courtesy of Rufus46 via Wikimedia Commons)

PSG vs. Real Madrid
Although based upon the result, the first leg seemed to go PSG’s way, a closer look at the statistics reveals that this was not the case at all. Even though the home side managed to secure the win through a run into the box by Kylian Mbappé in the fourth minute of stoppage time at the end of the second half, PSG had the chance to put up a much wider margin. Having tallied a total of 21 shots, eight of which were on target, PSG completely failed to take full advantage of the opportunities they had. While some shots were blocked due to the efforts of Courtois and the Real Madrid defense, many whizzed over the top of the goal or across the face of the goal, and others just seemed to have the wrong amount of power or the wrong trajectory. For an offensive lineup composed of Mbappé, Lionel Messi, and — beginning in the 73rd minute — Neymar, the inability of PSG to capitalize on the myriad of chances they had was truly unfortunate, especially considering the fact that they managed to limit the visitors to just three shots, none of which were on target.

PSG’s inability to open a bigger margin at home would come back to haunt them in the second leg. The visitors played reasonably well in the first half at the Santiago Bernabéu, with Mbappé scoring in the 39th minute to make the aggregate score 2-0 in PSG’s favor. Real Madrid would not be so passive this time around, however, and Karim Benzema scored in the 61st, 76th, and 78th minutes — a 16-minute hat-trick — to win the second leg for the hosts 3-1, putting Real Madrid through to the quarterfinals. Ironically enough, Real Madrid tallied 21 shots in the second leg, seven of them being on target. Their ability to capitalize on three of these chances in comparison to PSG’s one in the first leg truly ended up being the difference between a spot in the quarterfinals and being knocked out of the European Champions League.

Sporting vs. Man. City
The two legs of the Sporting-Manchester City match went about as expected. Sporting was completely outclassed in the first leg, and City managed to score a total of five away goals — Riyad Mahrez opened the scoring in the seventh minute, Bernardo Silva followed Mahrez up in the 17th minute, Phil Foden scored in the 32nd minute to make it 3-0, Silva completed his brace in the 44th minute, and Raheem Sterling topped it off with a fifth goal in the 58th minute. Sporting never had a chance, with just three shots, none of which were on target.

Manchester City came into the second leg confident in their five away goals, and perhaps rightfully so. Still, their performance in the second leg paled against their performance in the first. Despite 14 shots, four shots on target, City failed to score a single goal at their home stadium. Regardless, they shut Sporting out. The match ended with no goals scored on either side, but City’s five goals from the first leg were more than enough to send them through to the quarterfinals with an aggregate scoreline of 5-0.

Salzburg vs. Bayern Munich
Salzburg played well in the first leg against Bayern. Despite having the odds against them, the home side took the lead in the 21st minute through a goal by Chukwubuike Adamu. Although they could not convert any of their other five shots on target, Salzburg prevented Bayern from scoring until a 90th minute attempt by Kingsley Coman drew the visitors level. Bayern’s performance was underwhelming. Converting just one of 22 shots (nine on target), Bayern failed to create a favorable margin going into the second leg.

Bayern were phenomenal in the second leg. Playing on home turf with Manuel Neuer back from injury, the German side looked much more comfortable. Robert Lewandowski opened the scoring with a penalty in the 12th minute, then doubled Bayern’s lead with a second penalty in the 21st minute. Just two minutes later, Lewandowski completed his 11-minute hat-trick to make the score 3-0 to Bayern. Serge Gnabry joined Lewandowski on the scoreboard with a goal in the 31st minute, as did Thomas Müller in the 54th minute. Maurits Kjærgaard pulled one back for the visitors in the 70th minute, but it was too little, too late. Müller completed his brace in the 83rd minute, and Leroy Sané topped it off with a clinical finish in the 85th minute to make the final scoreline 7-1 — the largest margin in this year’s round of 16 — sending Bayern through to the quarterfinals on an 8-2 aggregate.

Inter Milan vs. Liverpool
The first leg went about as expected. Although they were on home turf, Inter Milan were ultimately unable to hold off Liverpool’s offense. The first half ended with neither team making it onto the scoreboard, but Liverpool were persistent in their attacks, and Roberto Firmino finally ended the deadlock in the 75th minute. Teammate Mohamed Salah doubled the lead with a goal in the 83rd minute to give Liverpool a 2-0 edge going into the second leg.

Despite being back at Anfield for the second leg, Liverpool failed to perform as well as they did in the first leg. While they were able to convert both shots on target in the first leg, Liverpool failed to find the back of the net at home despite 12 shots (two being on target). This gave Inter Milan the opportunity to stage a comeback. But despite a goal in the 61st minute by Lautaro Martínez giving the visitors some hope, Inter were unable to convert either of their other two shots on target. And so, despite winning the second leg 1-0, Inter Milan lost to Liverpool 2-1 on aggregate, and it was ultimately the English side that moved on to the Champions League quarterfinals.

Chelsea vs. LOSC
Much like the matches between Manchester City and Sporting, LOSC put up a good fight despite having the odds stacked against them, but were ultimately unable to overcome a stronger Chelsea side. Kai Havertz opened the scoring in the first leg with a goal in the eight minute, and teammate Christian Pulisic doubled the hosts’ lead in the 63rd minute. Despite the match finishing 2-0 in Chelsea’s favor, Lille put up an impressive fight, recording 15 shots (albeit only two were on target and neither were converted) and statistics similar to Chelsea in possession, passes, and passing accuracy.

Lille’s efforts persisted in the second leg, and a penalty converted by Burak Yılmaz in the 38th minute put the hosts within one of equalizing the aggregate score. Chelsea continued their consistency, however, and a goal by Pulisic in the third minute of injury time before half-time leveled the visitors. César Azpilicueta scored in the 71st minute to solidify a 2-1 win for Chelsea, making it 4-1 on aggregate to the English side and sending them on to compete in the Champions League quarterfinals.

Villareal vs. Juventus
Juventus entered the first leg as the obvious favorites and seemed to confirm their dominance when Dušan Vlahović scored off of a counterattack with just 32 seconds on the clock. The Old Lady, however, failed to make any additional headway afterward, managing just one more shot on target which was not converted. In contrast, Villareal played well, recording three shots on target, with the 66th minute attempt by Dani Parejo drawing the home side level.

Despite Juventus having underperformed in the first leg, they were still expected to win the second leg and move on to the quarterfinals. They were playing on home turf and, indeed, the statistics confirm that they had more shots (14), shots on target (five), corners (seven), possession (59%), and passing accuracy (90%) than the visitors. Despite all this, however, the Old Lady failed to capitalize on any of her opportunities. In contrast, Villareal played clinically and efficiently. Despite recording just three shots on target, the Spanish side converted all of them. Gerard Moreno opened the scoring with a penalty in the 78th minute, Pau Torres followed that up with an 85th minute goal, and another penalty converted by Arnaut Danjuma in the second minute of stoppage time won the match for the visitors 3-0. With a final aggregate score of 4-1, Villareal put themselves through to the quarterfinals and knocked Juventus out of the Champions League.

Atlético Madrid vs. Man. United
Like Juventus, Atlético started off the first leg well, with João Félix putting the hosts up 1-0 in the seventh minute. Also like Juventus, however, Atlético made little progress after Félix’s effort. Despite putting up 12 more shots across the rest of the 90 minutes, Atlético failed to record any more shots on target. This gave Manchester United the opportunity to draw level, but the English side struggled as well. It wasn’t until an 80th minute attempt by Anthony Elanga that the visitors equalized to make the final scoreline 1-1.

The second leg didn’t go much better for United. Despite 11 total shots, five being on target, the English side was unable to beat Jan Oblak. While De Gea held his ground impressively as well in the United goal, he was unable to deny a 41st minute header by Renan Lodi. With Lodi’s effort being the only goal of the match, a 1-0 scoreline meant that Atlético Madrid would be the team to qualify for the quarterfinals on a 2-1 aggregate.

Benfica vs. Ajax
The first leg between Benfica and Ajax proved to be one of the most eventful and thrilling matches in this year’s Champions League round of 16. Dušan Tadić opened the scoring for the visitors in the 18th minute, but this was negated when Sébastien Haller put the ball into the back of his own net in the 26th minute to make the score 1-1. Haller then redeemed himself just minutes later, scoring a second goal for Ajax (this time at the right end of the field) in the 29th minute. Benfica was not passive, however, and put up a strong offense in the second half of the match. This paid off, and Roman Yaremchuk’s 72nd minute effort drew the home side level again, and the match ended 2-2.

Despite being at home for the second leg, Ajax performed arguably worse. Whereas in the first leg, the Dutch side recorded 11 total shots with eight of them on target, just two of the 16 shots Ajax took in the second leg were on target. Even though they had significantly more control over possession and passing accuracy, Ajax played mediocrely at best. Although Benfica played highly defensively and recorded just a single shot on target (and four shots total), one shot was all that they needed. André Onana came off his line to punch away a corner, but a header by Darwin Núñez directed the ball past Onana and into the back of the net with just 13 minutes left on the clock. Ajax had no reply, and a 1-0 win made the aggregate 3-2 in Benfica’s favor. This sent the Portuguese side on to the quarterfinals and knocked Ajax out of the European Champions League.