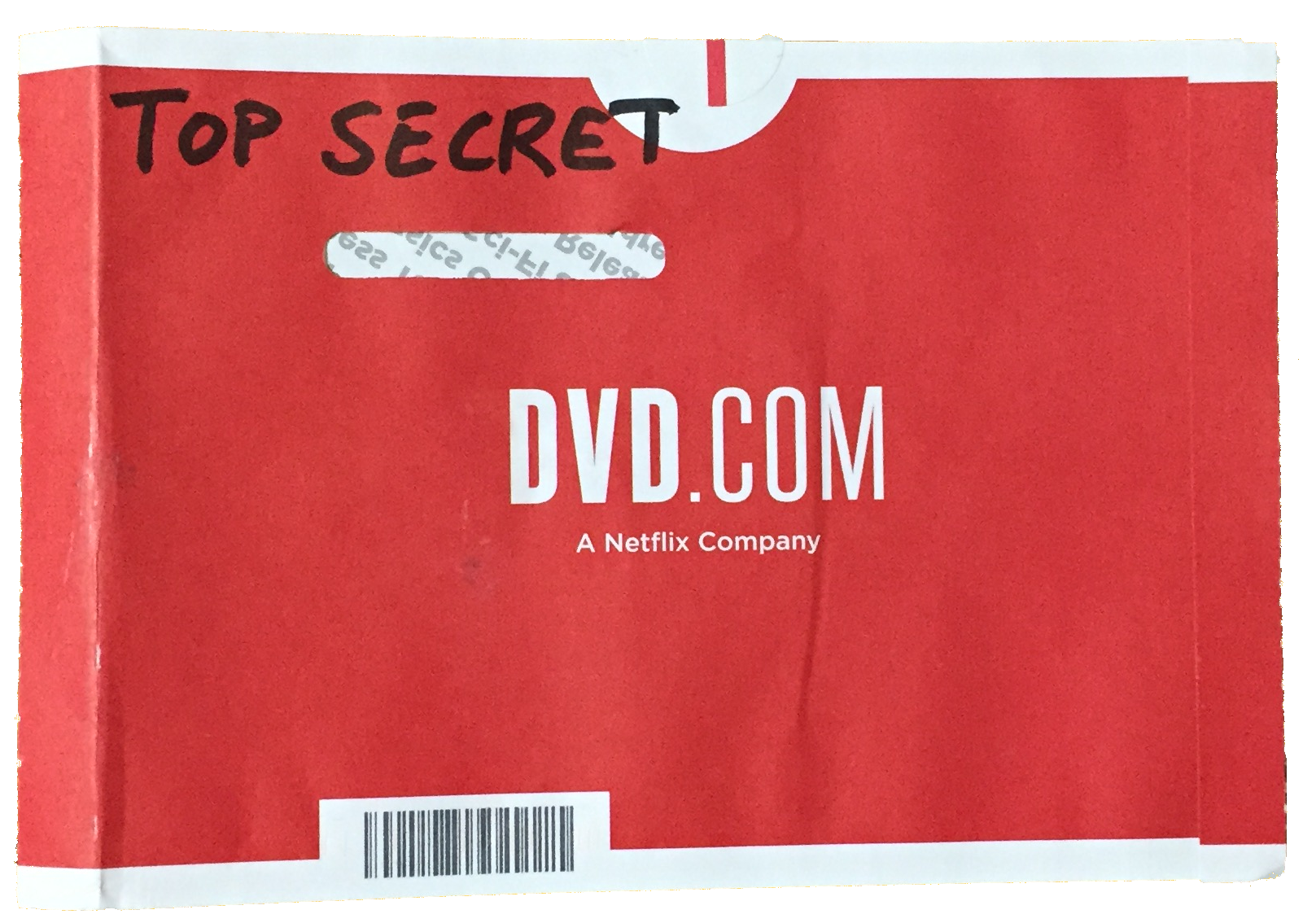 My articles seem to have garnered a bit of renown in the journalistic world, which has led to some perks. Not only do I get invited to all the ultra secret coastal elite parties with Lena Dunham, Barbara Ehrenreich, Jia Tolentino, Thomas Frank, Joe Biden, etc…, but I also get access to some scoops that the average schmuck wouldn’t. I wouldn’t say I'm Woodward, but I’d definitely place myself above Bernstein. Anyways, this is all to explain the extraordinary scoop that has been entrusted on me by one of my loyal readers. I was working late in the Tartan office when I received a knock at the door. I rushed over, praying that someone new was finally interested in writing for the Tartan, but when I opened, there was nothing but the loud clacking sound of flip flops against linoleum ringing at the end of the hall. My dismayed self looked down at my very normal sized feet to see a letter emblazoned with a red N. I opened the envelope, excited that Netflix had greenlit my original romantic dramedy sitcom miniseries with highly GIF-able moments, but those nincompoops haven’t gotten back to me yet. Instead, it was the leaked scripts for the entirety of the Queen’s Gambit Expanded Universe, as well as some notes from high ranking producers. I gotta say, the envelope was pretty fat. I can’t be too detailed with my leak, nor can I include every planned project as I don’t want this information to be traced back to me. Here are the four most developed productions for the initiative. Just remember, all of the information that I put here is subject to change in the final television product, and if they pull a “Dark Universe” (2017-2017), I am not to blame.

** The Queen’s Gambit Declined: **
This second miniseries picks up where the "Queen’s Gambit" left off, with Beth Harmon having just won the Moscow Invitational.
Beth Harmon is riding high off her win against Borgov, and has been getting more and more stressed from all the additional expectations placed on her. This has led her into becoming a more reclusive and hateful character, reminiscent of Bobby Fischer. Her problematic tendencies have begun to compound, and she soon realizes that she is no longer playing that the level that she was supposed to be playing on. This rough realization sends her spiraling even further, and she once again locks herself in her family home. She invites Benny Watts to fix her game up, but he refuses over the phone, saying he has decided to become a cow rancher. Taking some liberties with the way the chess championship title is constructed, Beth Harmon receives an invitation to the Candidates tournament, the winner of which will be able to face the current world champion, the soviet genius Boris Popov. The script notes describe him as a mix between Tigran Petrossian and Boris Spassky, and as a jovial man that plays chess incredibly defensively and consistently. The central pressure of this season will be if Beth manages to get her addiction and mild racism (this obtained when her characterization was shifted more towards that of Fischer) under control for long enough to become a challenger for the upcoming world chess championship.

** The Bongcloud: **
A period piece stoner comedy, this Cheech and Chong-inspired film follows two college dropouts that smuggle marijuana using hollow chess boards and pieces. This plan goes awry when they come in contact with a Mexican drug lord and chess aficionado, who makes them play for their lives. Of course, neither of them even know how to play! This script is the least connected to the Queen’s Gambit out of any that I saw, and most likely was just a generic chess stoner comedy that got slightly modified to fit into Netflix’s plans. The only connections I could find were an on-off line about selling pills to orphanages, and Thomas Brodie-Sangster reprising his role as Benny Watts for a one scene cameo as a cow rancher.

** The Fried Liver Attack **
I have the least information on this one, as it is mainly a cooking show without a significant plot. Each episode will highlight a chess player, real or fictional, and then create their favorite dish. Each episode ends with that chess player eating the dish, and commenting on the quality. For example, episode 17 features the custodian William Shaibels favorite dish, a nice lobster Bisque. The chefs struggle with giving the soup the proper consistency, and William Shaibel dislikes the result. Episode 18 features Carlos Santana, a musician that has previously played chess. All episodes have been filmed, and plans have been made to release this show anyways if plans fall through for the other chess shows. The plan there will be to repurpose it as a reality tv show about cooking the favorite dishes of random Netflix users (played by struggling LA actors that technically are Netflix users), and keep the actual recipes the same. Plans for a second season are already underway, with negotiations for actual famous chess players underway.

**The Interactive 'Fortnite' Experience: **
Envisioned as a necessary aspect of the QGEU that adds significantly to the story, players will play the roles of advertising executives trying to get a hold of Beth Harmon so that they can get her to shill for their products. A chessboard will be located on the map, and the first player to find it becomes Beth Harmon. Unlike the ad execs, she doesn’t get to use a gun, and has to use her increased building speed and doubled rate of building materials to hide from these executives. When she feels she has the upper hand, the player controlling her is able to broadcast her location to all other players, wherein they will have five minutes to get her signature on some documents (shoot her with their guns) before they are all fired by their bosses (killed.) Along with this initiative will come a Beth Harmon skin, a Benny Watts skin, and a skin of Peely with a chess piece on his head. An assortment of new emotes and dances will also be added to the game, discounted for people who show proof of them having watched the entirety of “the Queen’s Gambit.” Among these will be one of normally playing chess, one of the character angrily resigning, one of the character wobbling while holding a comically large jar filled with pills, and a twerking one. This event is expected to be released one week before “Queen's Gambit Declined”, and will show what happened between episodes three and four of the show.

** Production Notes: **
The producers involved with the idea of a QGEU seem to have been very proud of themselves. They are all excited with the success of the "Queen’s Gambit" last year, and have been trying very hard to capitalize on it. Problematically, the projects in this line of stories have been having some troubled productions, and upper management at Netflix reduced their cash flow after the success of “Squid Game.” These producers (who I will give false initials due to my incapacity to name) have also been interfering in the productions, and trying to make their own marks. In their own words:
K.L.: We need a Beth Harmon that is hip. She needs more swag. And she is lacking in what millennials call “girlboss." Our testing has found that millennial women in the 13-25 age range react well to these types of attributes. With this being the flagship show of the whole endeavor, we’ll also need to get the young male demographic. They love making memes.
R.P.: Like the darude sandstorm video we presented earlier.
K.L.: Yes, like darude sandstorm or nyan cat. We noticed a lot of people talking about the first “Queen’s Gambit” on Twitter, and we want to make more Twitter-able moments.
L.T.: This is where I come in. I have been working with our stupid scriptwriters to get Anya to say something about her dad loving beans. This will connect us to the frankly hilarious bean dad series of tweets, which people will notice and tweet about.
W.F.: We should make her skateboard. Kids love skateboarding.
A.B.: My son loves "Fortnite," we should put "Fortnite" in.
K.L.: Fortnite sadly didn’t exist back then, but we have been in talks with Epic Games to have a “Queen's Gambit Declined” event. In the meanwhile we have added scenes of her playing video games in the episode where she locks herself in her house and has a mental breakdown. This will do well with young men.
A.B.: Will she hit a JUUL?
K.L.: Of course she will!
They then laugh furiously for 5 minutes while vigorously patting themselves on the back.