A modern take on a Shakespearean history 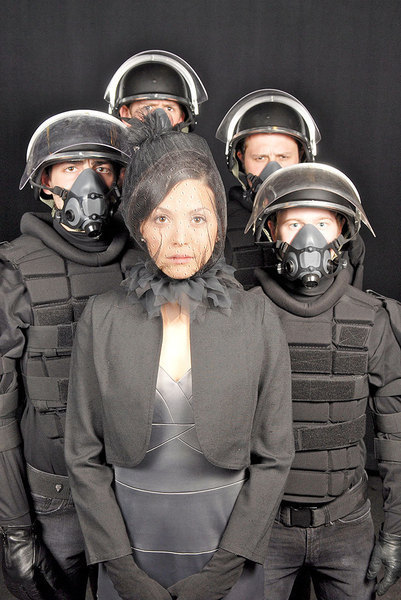 The School of Drama places Richard III and its actors in a modern setting as SWAT team members. (credit: Courtesy of Louis Stein)

The School of Drama’s production of William Shakespeare’s Richard III was not what you’d have expected. In fact, its use of technology and its modernized take on the play marked it as a unique and interesting performance, both full of energy and relevant to modern audiences.

The production, which opened on April 15 at the Chosky Theater, attempted to put a modern twist on a Shakespeare classic. Richard (played by drama fifth-year senior Gabriel King) was the villain of the play, who killed most of the people around him to win the throne. At the beginning, Richard used a video camera to shoot videos of himself, which were displayed on a television monitor nearby.

We first saw Richard at the opening of the play, filming his speech and divulging his plan to become the villain of the tale, as he was ugly and deformed, and could not be the lover. The soldiers around him were reminiscent of a SWAT team or riot police, complete with riot masks and long, black sticks in place of guns or swords.

By the opening of the play, Richard had already killed two people, and was plotting the imprisonment and execution of his brother George (drama senior Alborz Ghandehari), while pretending it was their brother King Edward IV (drama senior Skyler Scott) who wanted George dead.

Besides the throne, Richard also desired Lady Anne (drama senior Bekie Berkman-Rivera), whose husband and father he had killed. He tried to seduce her as she grieved over the red coffin of her husband, which was eventually carried out of the theater by the soldiers.

As the play went on, more television monitors were brought to the stage. After Edward died of natural causes and not by Richard’s hand, the funeral march was shown on the screens.

Richard decided to take the lives of Edward’s two young sons (Peter Foster and Larry McKay) in order to avoid losing the throne, which he gained by having Lord Buckingham (drama senior Chase Newell) suggest that the boys were illegitimate following Edward’s death.

Perhaps one of the most powerful scenes of the performance occurred near the end. The stage was mostly dark, except for an eerie projection of light. Soldiers slept on the ground the night before the battle in which Richard would die. The ghosts of the people Richard killed returned, speaking to him, all in white except for where the red spots from the blood of their violent deaths stained their clothing. The two young boys Richard killed provided the backdrop for the scene, with one playing piano and the other singing until they, too, haunted their murderous uncle.
The play was well done, performed with a modern feel that brought the events of the power struggle between the houses of York and Lancaster in the 15th century into the 21st century using multimedia and technology.

In the program for the show, it was explained that the play as performed by the School of Drama was meant to reflect the fact that these struggles still happen today. It stated: “Violent transitions of power between opposing political forces, the cultural and religious implications of world military conflicts, the challenges faced by physically and psychologically damaged veterans, and the cynicism that accompanies the promise of a new leader are all too familiar to the American public.”

The last paragraph of the program section titled “Shakespeare, Our Contemporary” stated, “Our heightened, modern reflection of Richard III explores how a contemporary Shakespeare production can question, subvert, and reframe both the past and the present at once.”

If this was the goal of the production, it can certainly be considered a success. The ties between the past and the present were very clear, especially given the riot gear that the army soldiers wore. In light of recent events, this outerwear symbolized tyranny and an unjust use of power, something that resonated for the characters in the play as well.

The set was minimal. It consisted largely of a throne that could be lowered from the ceiling as needed and several coffins, which rarely gave the characters much of a backdrop, but not to the detriment to the play. It allowed the audience to focus on what this performance was about — the events and characters. The lack of a traditional set also allowed the events to seamlessly transition from those in the play to those in the world. With a set denoting an era, the events and meaning would be firmly grounded in time, rather than spanning the centuries as they did in this version — a good choice for this performance.

Costumes were also fitting, though confusing at times. Some characters seemed to come out of past times, while others dressed for today. The military costumes were appropriate and created a powerful image. The white-clad ghosts were also powerful, standing out from the darkly dressed soldiers around them.

The actors put on strong performances of their characters. King was especially good as Richard, using the lines to show both Richard’s ruthlessness and villainy and to show his insanity. Margaret, the former queen of England (drama senior Daisy Hobbs), was also an interesting and well-played character. With her former power gone, Margaret was unable to walk or stand and was exiled from the kingdom. She returned to speak with some of the characters, though, and Hobbs did an excellent job of showing the woman’s despair.

Each aspect of the show, from the acting to the set and the costumes to the use of media and technology, contributed to its success.