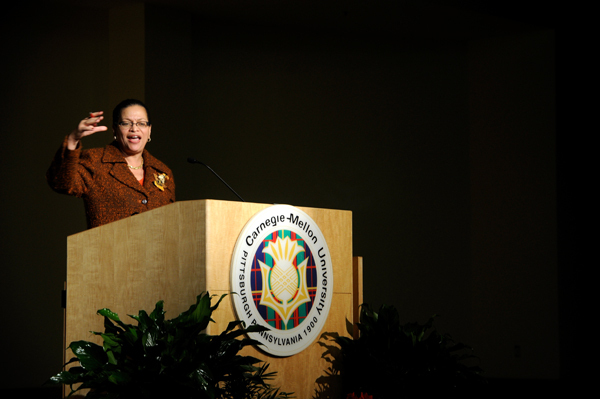 “This little light of mine, I’m gonna let it shine, let it shine,” proclaimed the straight-line march through the Carnegie Mellon University Center, up the staircase, and into Rangos Hall, as a crowd flowed from the vigil for Dr. Martin Luther King Jr. to the speaker series. Led by such voices as President Jared Cohon and Vice Provost for Education Amy Burkert, students, faculty, and staff marched proudly to hear the words of President Julianne Malveaux from the Bennett College for Women as the Martin Luther King Day featured keynote speaker.

Cohon gave the opening remarks, noting the push for diversity at Carnegie Mellon as a powerful and personal effort. Cohon currently leads the Diversity Advisory Council (DAC), which was implemented to study and provide solutions for increasing diversity throughout the campus.

According to the DAC website, www.cmu.edu/diversity-guide, the council strives “to not only heighten awareness and encourage civil debate on the issues that surround diversity, but also to implement activities that support mutual respect and community success.”

Maggie Soderholm, a junior philosophy and statistics major, stirred the audience with an opening speech, translating her experience as a child to communicate the responsibility of privilege. Claiming King as an inspiration, she learned of the black population’s struggle for civil rights and found the lackadaisical response by the white community unacceptable.

Soderholm touched on the issue of equal rights by regarding the struggle for gay marriage as a parallel effort.

In a powerful yet light-hearted tone of voice, Malveaux took the stage and began highlighting King’s misrepresentation as a pastor rather than a revolutionary economist. “We have sanitized this man,” said Malveaux, trailing off into a systematic account of the economic segregation that plagues modern America.

“Economists looked at everything without the African American....no one will say ‘black unemployment.’”

Malveaux claims that America’s economy discriminates against African Americans and Latinos through aspects such as credit, which affect one’s ability to obtain higher-paying jobs and opportunities and which directly relate to both communities.

According to her personal website, www.juliannemalveaux.com, Malveaux is “a committed activist and civic leader” and “has held positions in women’s and civil rights and policy organizations.”

“I have the audacity to believe that peoples everywhere can have three meals a day for their bodies, education and culture for their minds,” Malveaux read from an excerpt taken from King’s speech upon receiving the Nobel Peace Prize in 1964.

She believes that health care and education have become stratifying factors for low-income people. “This is not a personal problem; it is a structural one,” Malveaux said. “Our nation is choosing to be a developing nation because we refuse to invest in education.”

Malveaux stressed the means of King’s visit to Memphis, in which he championed efforts for African American garbage workers and their equal wages. King fought for impoverished citizens in the years leading up to his assassination, which occurred April 4, 1968 in Memphis, Tenn.

The crowd listened in earnest through the closing statement by Malveaux, “Economic justice means [King] had the audacity — do you?” A resounding applause roared from the audience.

A crowd surrounded Malveaux after she exited the stage. She met with attendees in the hallway, where she signed copies of her book titled Surviving and Thriving: 365 facts in black economic history, which has been nominated for a NAACP Image Award.