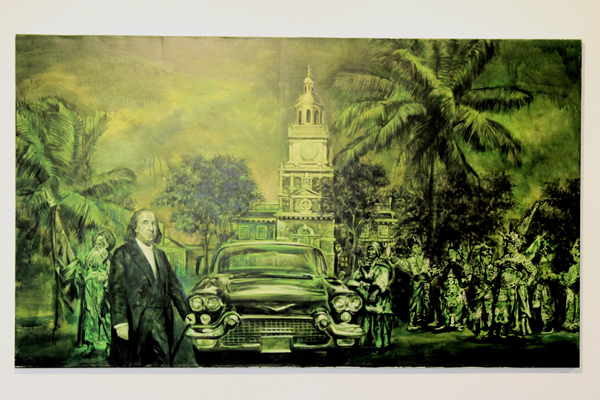 Queloides is the Spanish word for keloids, which are excessive growths of scar tissue that develop over a wound; the name of the exhibit refers to the social and cultural scars that develop as a result of racism. Although the social transformations implemented in the 1960s in Cuba hoped to erase racism, there has been a resurgence of racist attitudes and racial inequalities in Cuba ever since the Soviet Union’s collapse 20 years ago. The exhibit, according to a letter published by the exhibit’s curator, Alejandro de la Fuente, “is the emphatic protest of a group of visual artists against the resurgence of racism on the island.”

As one might expect from an art exhibit about racism, many of the works were infused with political messages. Pedro Alvarez’s “The Romantic Dollarscape Series” incorporates images of Cuban peasants with images from American dollar bills, all in a green color reminiscent of the color of dollars. Alexis Esquivel’s “Mitochondrial Democracy” has an even more obvious political theme: In the right-hand side of the painting he put small portraits of all of the United States presidents, with Barack Obama

standing out in stark contrast to the pale, peach, and white portraits of the rest of the presidents. On the rest of the painting he includes portraits of working slaves and a diagram of a mitochondrion, emphasizing that there is no biological distinction between different races, even though many Europeans used to try to make scientific arguments as to why white men were superior.

Although politics was a prevalent theme in many of the artworks, not all of the exhibit’s pieces were political. “Ave Maria,” by Meira Marrero and José Toirac, was a collection of found statues of the Virgin Mary. René Peña, one of Cuba’s best-known photographers, included a series of dark, personal photographs, including “Black Marat,” an image of a black man in a bathtub that is highly reminiscent of David’s famous painting “Death of Marat.” Instead of clutching written political statements, as David’s Marat does, Peña’s Marat is holding a toilet bowl brush, evoking questions about the relationship between race, education, and social status.

Queloides: Race and Racism in Cuban Contemporary Art, on display through Feb. 27, is a diverse, thought-provoking exhibit, and although its focus is racism in Cuba, viewers may find themselves applying the artwork’s questions of race, social structure, and politics to current events right here in the United States.