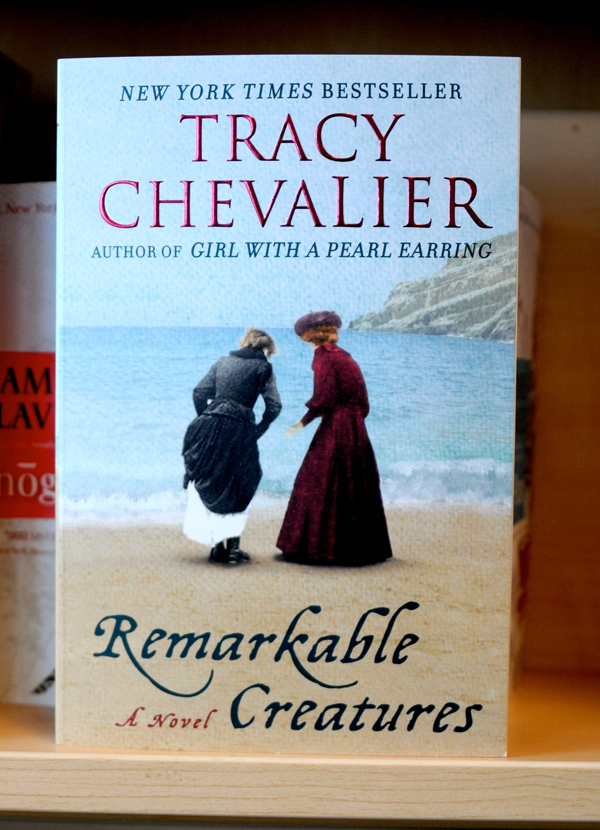 Aside from walking past the statue of the diplodocus outside of the Carnegie Library, currently wrapped in a scarf to weather the winter months, one is unlikely to encounter a dinosaur in Pittsburgh. Despite the fact that tyrannosauruses do not roam the streets of Squirrel Hill today, few would question the fact that dinosaurs once existed ages ago. However, for Europeans living in the 19th century, the idea that a creature could exist at one point, but not exist today, would have been shocking. To them, the idea was blasphemous because it challenged the priests’ literal translation of the Bible, which was interpreted to say that God did not make mistakes. The idea of an extinct creature, an animal that could not survive in its environment, would have been considered a mistake.

Within this close-minded world dominated by the Church, author Tracy Chevalier explores in Remarkable Creatures the true story of a working-class woman living on the English coastline who discovers an anomaly — the bones of a creature that is not quite a crocodile, but rather an animal that died out years ago: an Ichtyosaurus.

Remarkable Creatures focuses on the life of Mary Anning. Anning was a poor, uneducated, self-taught “fossil hunter” with an uncanny gift for spotting skeletons. Despite the fact that women were second-class citizens in 19th century English society, Anning’s talent for fossil hunting allowed her to carve her own place in a male dominated world — and eventually into the history books — as a woman who worked side-by-side with prominent scientists of her day. Her work helped lead the European scientific community towards a new way of understanding the creation of the world.

Told through the eyes of someone who lived her own life in the presence of the bones of those who came before her, Remarkable Creatures is also a reflection on life and death. The juxtaposition of life and death, which Anning encounters on her day-to-day scavenges, makes the reader acutely aware of the overwhelming age of the Earth in comparison to the briefness of one’s own life. In a world that does not encourage freedom of thought, the perspective Anning gains from scavenging helps her and the other characters to reach their own self-actualizations and cast off the weight of society in order to live their own lives, rather than suffer to fit the mold that society assigns them.

Breaking barriers for science, religion, and women’s rights, Remarkable Creatures is a thought-provoking story, beautifully woven together through rich imagery, compelling characters, and an enthralling plot. Historical fiction has never felt more real than when Chevalier, who also wrote Girl With a Pearl Earring, describes the way the waves lick the beach, or the jolt that Mary gets when she sifts through the sand and discovers a new fossil.

Today, Anning’s work is showcased in the Natural History Museum in London and at Oxford University. Check out Remarkable Creatures, available at all major bookstores and libraries. Also, for more information on dinosaurs, go see the “Dinosaurs in Their Time” exhibit, featured at the Carnegie Museum of Natural History here in Pittsburgh.