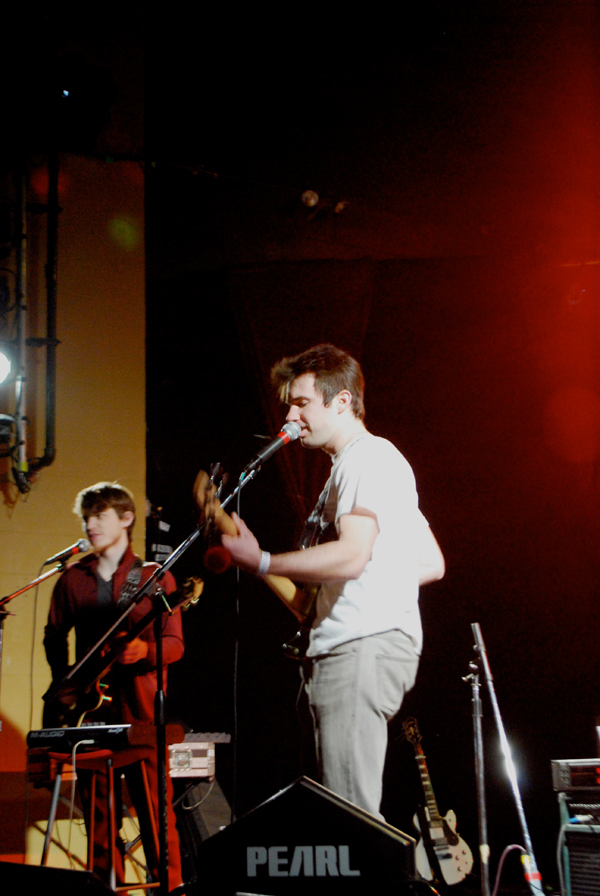 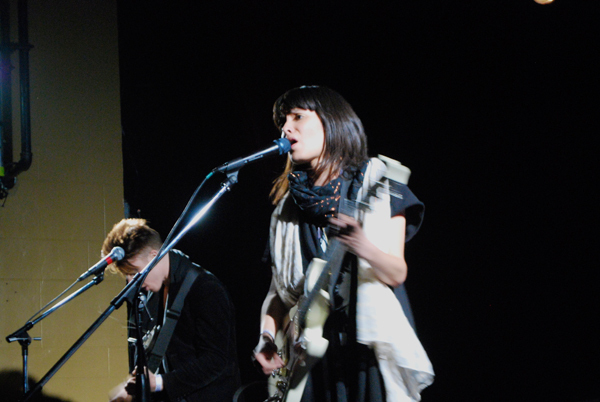 This is School of Seven Bells’ first tour with only one singer, Alejandra Deheza. (credit: Anna Walsh | Pillbox Editor)

For fans of hypnotic beats and dreamy, sweet vocals, the School of Seven Bells’ concert at Mr. Small’s Theatre was the place to be last Friday.

The show, which was presented by the University of Pittsburgh’s radio station, WPTS, began with three Pittsburgh bands serving as opening acts. The first was The Show, a four-man group whose music was reminiscent of any rock group that might have begun in a high school student’s garage. Although the majority of the members looked relaxed on the stage, the lead singer acted almost manic, jumping around the stage in an attempt to hype up the audience. After The Show’s half hour set, The Velcro Shoes took the stage. The Velcro Shoes also identified themselves as a garage rock band, with high-energy music that sounded like it had heavy influences from both Foo Fighters and Weezer.

The last opening act of the evening was The Wrong Airport, a two-man band composed of recent Carnegie Mellon alumni Ryan Woodring and Patrick Torrez. Despite having only two members, The Wrong Airport still presented fun, complex music, creating loops of synthesizers, beat-boxing, and guitar chords to play behind Woodring and Torrez’s singing and guitar playing. The repetitive loops had an almost hypnotizing effect, particularly on songs such as “Highway” and
“Strange How,” the latter being the group’s final song of the evening about losing one’s virginity.

Finally, School of Seven Bells took the stage, wandering onto a dark stage as dreamy electronic sounds played in the background, and burst into the song “My Cabal.” School of Seven Bells originally consisted of identical twins Alejandra and Claudia Deheza and Benjamin Curtis, with the sisters singing vocals and Curtis creating the music to back the lyrics. However, Claudia recently left the band due to personal reasons, leaving School of Seven Bells with only one singer.

This was the first show the band had played since Claudia’s departure, and the decrease in vocal strength was evident: On the first song, the instruments and electronics completely overpowered Deheza’s voice until the sound levels were adjusted accordingly. Furthermore, the magic of many of School of Seven Bells’ songs relies on its hypnotic vocal harmonies, and with only one singer, the vocals in the concert often felt too thin, particularly on songs such as “Dust Devil” and “Half Asleep.” Although Deheza had a clear, lovely voice, her voice wasn’t quite strong enough on its own to provide a fullness in vocals necessary to balance out the instruments. However, since it was her first show since her sister’s departure, one could give her some leeway as School of Seven Bells adjusted to its new lineup.

The band flowed from one song into the next, only pausing once within its set after the second or third song to greet the audience. Both Deheza and Curtis were clearly deeply involved in their music, dancing around the stage as though entranced by the sounds they were creating. The seamless transitions between songs helped the audience get as wrapped up in the music as the musicians were, with many audience members swaying and dancing.

After a short set — they only played for an hour — the band’s members slipped off stage the same way they had slipped onto it: quietly walking off in the darkness as their electronic backings continued to play. However, after the insistent applause of the audience, they came back onstage for an encore, Curtis putting up a finger to indicate that they would only play one more song. The band broke into a cover of a Siouxsie and The Banshees song, putting its own dreamy spin on the song. Deheza often broke into laughter throughout the song, as she seemed to occasionally forget the lyrics, and as the song ended Deheza and Curtis both thanked the audience, beaming, before walking offstage for the final time.

Despite the vocal gap left from Claudia Deheza’s departure, School of Seven Bells still was able to put on a hypnotically beautiful show, proving that they put the “dream” in “dream pop.”