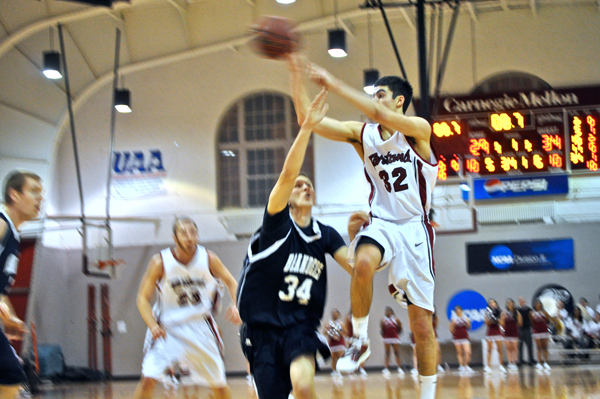 In the first, on Sunday, Jan. 16, the Tartans faced their second consecutive top-ranked Division III team, the No. 25 New York University Violets. The Tartans took down the Violets, beating a ranked team for the second time this season, by a score of 76–70 in this game.
The Tartans’ victory came on the tails of a stellar performance by senior Shane Rife, who scored a career-high 25 points and added six boards in the game.

With the game tied 8–8 in the first half, the Tartans went on an 8–0 run, ignited by Rife’s step-back three-pointer. He made his third three-pointer of the half on the following possession.

Quickly the 8–0 run became a 21–5 run, and it seemed the Tartans were rolling.

The Violets soon halted the Tartans’ spurt, as they closed to within two of the Tartans at halftime, with a score of 33–31.
The Tartans controlled the second half, as the only lead the Violets held in that half was in the first 30 seconds. After a layup by first-year Christian Manoli, the Tartans maintained the lead for the duration of the contest.

After clutch free throws by first-year Asad Meghani, the Tartans secured the 76–70 victory, upsetting the Violets.

The Tartans forged this victory with their offensive domination, outshooting the Violets 46.8 to 35.6 percent.

On Friday, the Tartans faced the University of Rochester Yellowjackets.

The Tartans never led in this game, losing 77–60. The Yellowjackets opened an 8–0 run to start the game. This was not the Yellowjackets’ only run of the game, as they went into halftime with a 37–22 lead, and were firing on all cylinders throughout the game.

The Tartans shot just 38 percent from the floor and were outrebounded by the Yellowjackets 39–27. Sophomore Andre Moore led the Tartans in scoring with a career-high 15 point performance. Duhring and Manoli each added 10 points.

After the two games this week, the Tartans are 5–9 on the year and 2–2 in UAA competition.

The Tartans look to play the type of offense that led them to upsetting the Violets in this week’s game against the Washington University in St. Louis Bears on Friday.