Swimming and diving push out opponents 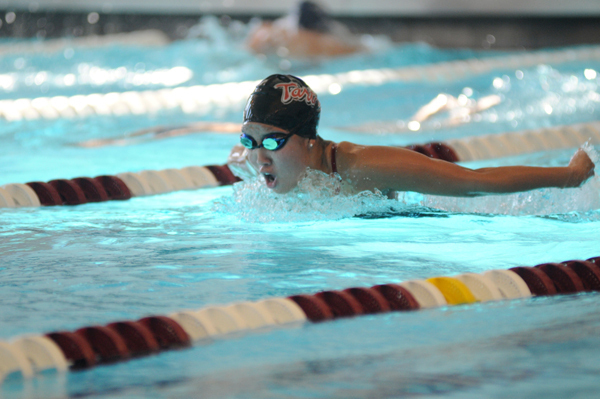 The Tartan women had a great showing from first-years Soleil Phan, Melissa Mohrenweiser, and Megan Garvey. Phan came up big by winning three events: the 100-yard butterfly, the 100-yard freestyle, and the 100-yard backstroke. Mohrenweiser came in a close second to Phan in the 100-yard backstroke, and Garvey followed Phan in the 100-yard butterfly. Senior Molly Evans set two provisional times during this meet: the first during her second-place finish in the 200-yard freestyle, and her second as she clinched the win in the 200 IM. The 200-yard butterfly proved to be a Tartan sweep as senior Rebecca Ussai came in first, followed by junior Hannah Gonzalez in second and junior Jen Sung in third. In the diving portion, junior Olivia DeFazio won the three-meter diving event and was edged out of first on the one-meter board by 0.15 points.

The Tartan men started off strong and finished strong winning the 400-yard medley relay and the 400-yard freestyle relay, respectively. The 400-yard medley relay team consisted of sophomore Dan Glaser-Garbrick, senior Alex Hanson, first-year Terrence Wong, and junior Matt Stanton. The 400-yard freestyle consisted of first-year Edward Sears, sophomore Brandon Yee, first-year Josh Chen, and Stanton. Hanson also finished first in the 200-yard IM, while Yee won the 200-yard freestyle, 200-yard butterfly, and 500-yard freestyle, Glaser-Garbrick took home both the 100-yard and 200-yard backstroke. In the diving portion, juniors Mike Alexovich and Eli Fatsi had a solid performance. On the one-meter board Alexovich edged Fatsi out for third place, while on the three-meter board Fatsi finished fourth and Alexovich finished fifth.
Both men’s and women’s teams had great distance performances. On the women’s side, junior Victoria Adams won the 1,650-yard freestyle. On the men’s side senior Frank Olechnowicz finished second in the mile.

The Tartans are set to compete this Saturday at Denison University at 1 p.m.