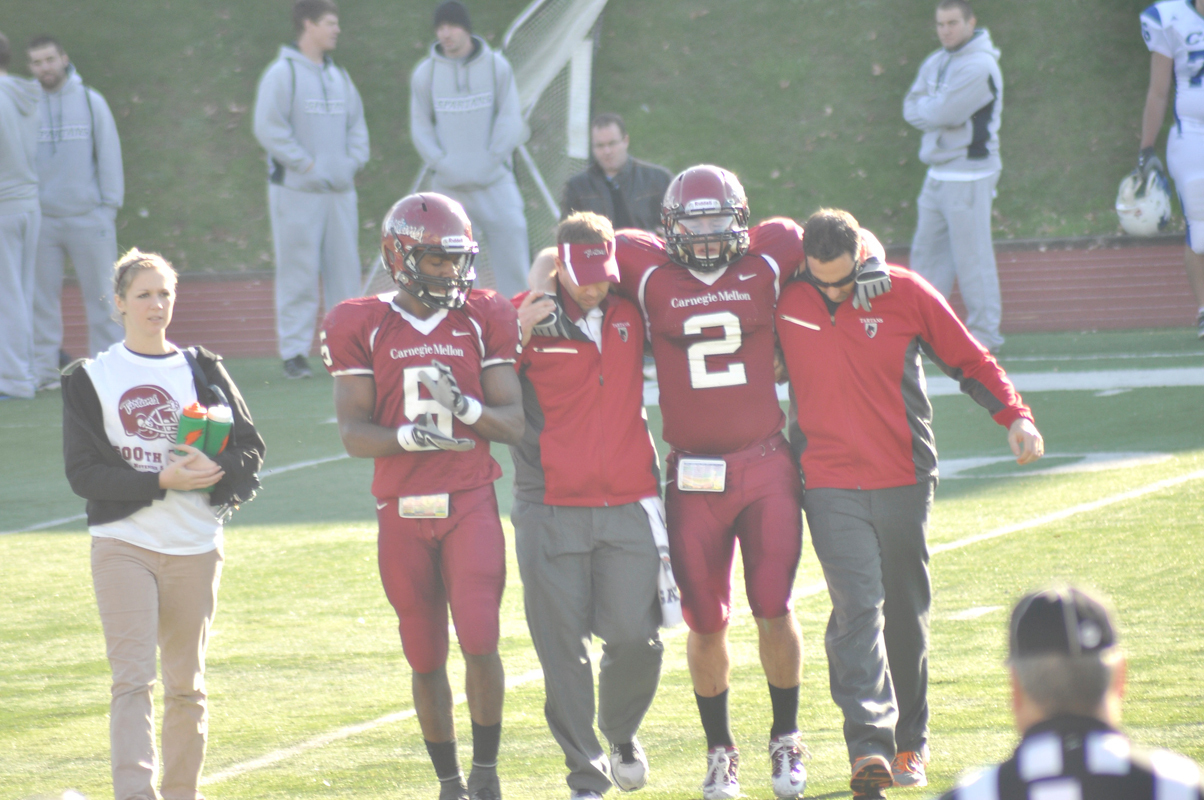 Senior running back Chris Garcia exits the field for the last time in his career after injuring his left leg. (credit: Alan Vangpat/Layout Staff) 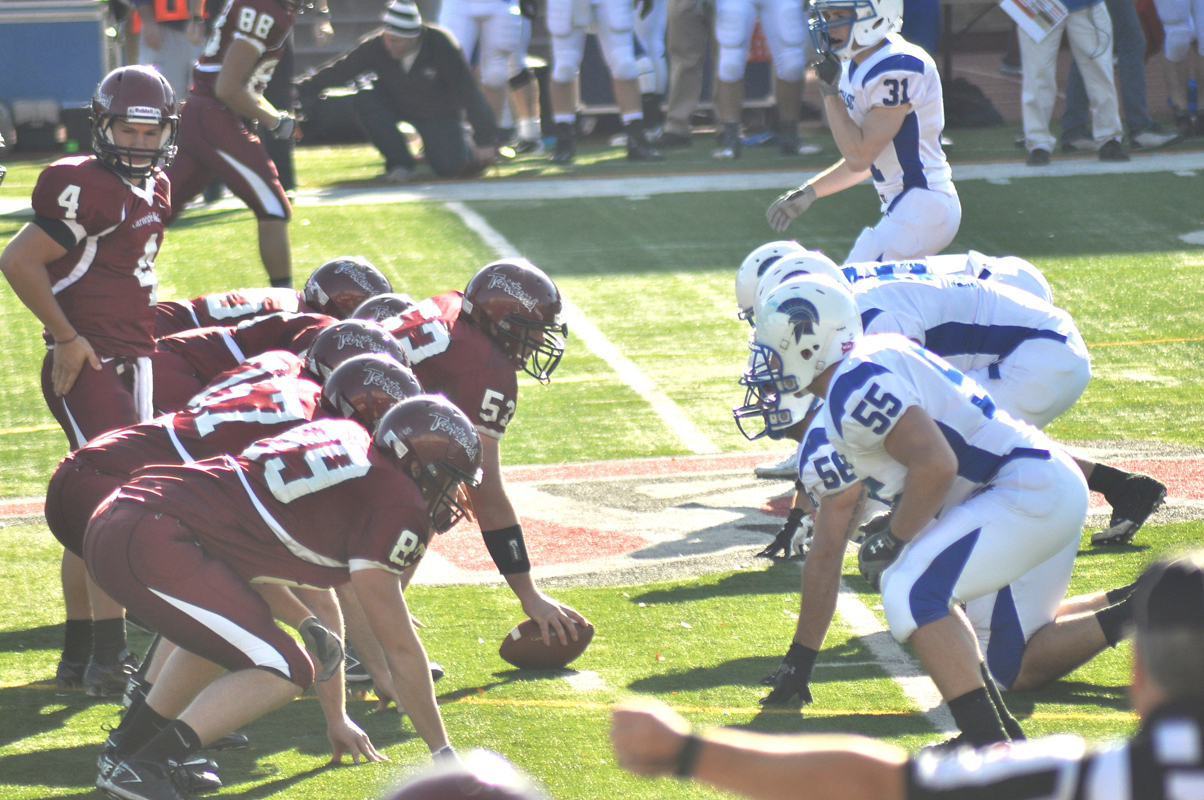 Sixteen carries by team-leading running back junior Patrick Blanks weren’t enough to overcome six sacks and two interceptions on sophomore quarterback Rob Kalkstein, as the Carnegie Mellon football team fell 38–24 on Saturday to the Case Western Reserve University Spartans. The annual contest between the Tartans and the Spartans, known as the Academic Bowl, took place under sunny skies at Gesling Stadium.

Most of the game’s scoring occurred in the first and fourth quarters. In the first quarter, Carnegie Mellon got an early 7–0 lead on the first possession of the game, as senior fullback Chris Garcia capped a brisk five-play drive with a two-yard touchdown run. Then, the powerful Case Western Reserve offense took over, scoring three times in seven minutes to take a commanding 21–7 lead at the end of the quarter.

The Spartan defense stood up to its No. 10 national ranking. After the team’s first drive, Carnegie Mellon was limited to just two first downs for the rest of the half. Kalkstein was sacked five times and often seemed reluctant to throw the football.

“Their defensive line was the best we’ve seen all year, and in critical situations we had one or two mistakes that Case took advantage of. We couldn’t put a good drive together,” Kalkstein said.

The Tartan defense tightened up in the second quarter, limiting Case Western Reserve to a total of two all-purpose yards on four three-and-out drives. Tartan defensive linemen Vincent Brown, Andrew Medenbach, and Dallas Hartman teamed up for two sacks on Spartan quarterback Erik Olson. The scoreless second quarter sent both teams into the locker rooms with the score still at 21–7.

After forcing a Case Western Reserve punt, Carnegie Mellon put the first points on the board in the third quarter when first-year kicker Dylan Munoz nailed a field goal from 33 yards out. On the ensuing possession, the Spartans answered the Munoz field goal with a field goal of their own. Later, Olson completed a highlight-worthy 21-yard touchdown pass on fourth and seven to increase the Case Western Reserve advantage to 31–10.

Carnegie Mellon began to battle back in the game’s final quarter. Kalkstein completed five of five pass attempts in a 13-play, 70-yard drive that ended with a Jake Nardone touchdown reception. Senior Seth Napierowski replaced Kalkstein at quarterback and completed a 20-yard touchdown pass to sophomore wide out Eric Dissinger, bringing the Tartans’ scoring total to 24. It wasn’t enough, however: Case Western Reserve added some late-game insurance in the form of another touchdown, resulting in the contest’s final score of 38–24.

Kalkstein regained his passing confidence, throwing for a total of 136 yards by the end of the game. Blanks led the Tartans in rushing yards with 52, and Nardone’s four catches gave him the team’s top spot in receiving yards with 41.

“It was an emotional game and the team came out and played hard for four quarters,” Nardone said. “We all wanted to send [the seniors] off on a high note, but having three turnovers against a great team like Case makes it hard to win.”

Saturday’s loss was particularly tough for Garcia and first-year offensive tackle Alexander Copeland, both of whom left the game early with injuries. Garcia, a senior, was playing in his final game as a Tartan.

Garcia has had a remarkable career, having been named an All-UAA Second Team and Honorable Mention selection; he awaits another possible All-UAA selection for his play this season.

With the loss, the Carnegie Mellon Tartans end the 2011 season with an even record of 5–5. Case Western Reserve improved to 9–1, winning the Academic Bowl trophy for the fifth straight time and clinching this year’s University Athletic Association title as well.

“I am proud of the way the team prepared and performed,” Head Coach Rich Lackner said. “Naturally we are disappointed in a 5–5 record, but we have a strong nucleus of players returning and are optimistic about 2012.”