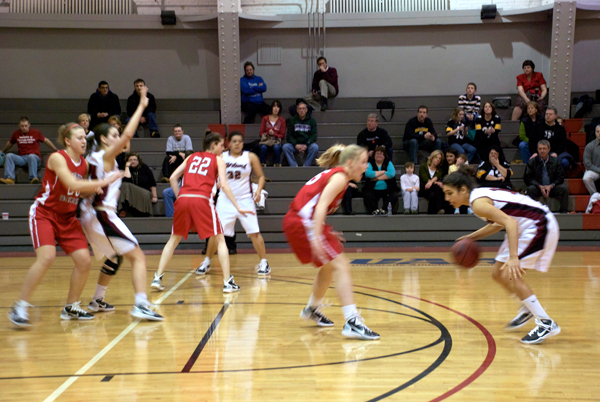 Junior Nicole Vaccarella dribbles the ball looking for a hole in the defense. (credit: Jessica Sochol) 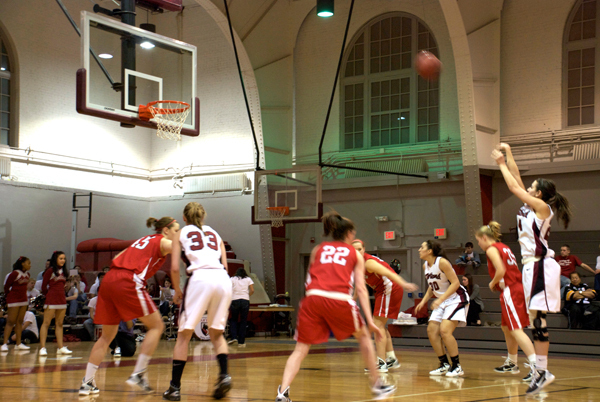 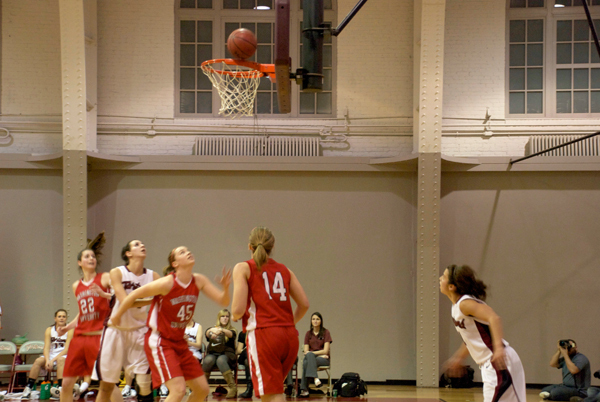 The court watches and the ball circles the rim. (credit: Jessica Sochol)

The Tartans hosted Washington University in St. Louis at home this past Friday. After a loss to the Bears on the road, the Tartans had the opportunity to use the home-court advantage as an edge. Carnegie Mellon, however, came up short in a 73–37 loss to the Bears.

The Tartans used the home court to their advantage, as they had a strong 4–0 start. This quick lead was soon lost as the Bears turned up the heat. The hot streak continued as the Bears made 15 out of the next 20 shots. The Tartans fought for momentum, starting with first-year Jacqui Shaw, who put eight points on the board. Offensively, the Tartans led in rebounds with 21 to the Bears' 18; however, Carnegie Mellon faced a 17-point deficit at the half.

Starting off the second half, the Tartans continued to fight hard, but it was no match for the Bears' shooting percentage. Wash. U. came out strong and put the Tartans on the defensive instantly. After opening the half with a 17–8 run, the Tartans were on their heels.

At the game's end, there were great performances by junior Jacki Cortese — fresh off her injury and already making her presence known on the court — who lead the team with 11 points. Shaw finished the game with 10 points for Carnegie Mellon. Sophomore Brit Phillips and first-year Gina Tudi had six and five rebounds, respectively.

The Tartans move to 2–17 overall in the season and 0–8 in University Athletic Association (UAA) play. The Tartans hit the road this coming weekend as they travel to Waltham, Mass., to face UAA rival Brandeis University on Friday, and then the team travels to New York City to face UAA opponent New York University on Sunday.