Noah and the Whale fails to meet expectations 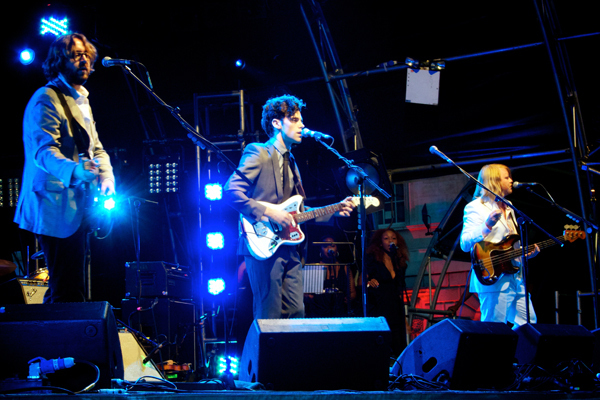 Noah and the Whale plays at Somerset House on July 10, 2010. The group’s new album leaves some listeners disappointed with its “ordinary” sound. (credit: Courtesy of aurelien on flickr)

When thinking of Noah and the Whale, the words “chipper” and “optimistic” don’t exactly come to mind — the group’s previous album, The First Days of Spring, was an epic break-up album, where vocalist Charlie Fink lamented love lost and heartbreak, as inspired by his breakup with ex-band member Laura Marling. However, its recent release, Last Night on Earth, is the exact opposite. Gone are the melancholy tunes and somber words. Instead, the beats are a little more happy-go-lucky and the lyrics are infused with a sense of hopefulness. Clearly Fink and the band have moved on from Marling’s departure.

Last Night on Earth immediately starts out upbeat and happy with “Life is Life,” whose message is about changing your life for the better and living to the fullest. This positive outlook manages to stay throughout the whole album, ironically enough, considering the ominous title of the album. The song is grand — filled with synthetic sounds, piano chords, and a gospel choir.

The second track, “Tonight’s the Kind of Night,” is equally hopeful, as Fink tells the story of a boy leaving his hometown behind for bigger and better things, thinking that “tonight’s the kind of night/that everything could change.”

Single “L.I.F.E.G.O.E.S.O.N.” is cutesy, with a strong beat and fast lyrics. Fink paints a vivid picture of possibility, preaching the idea that whatever happens happens and life goes on: “On my last night on earth/I won’t look to the sky/just breathe in the air/and blink in the light,” sings Fink.

“Give It All Back” starts off with a happy little melody from a xylophone and progresses into a first-person story, one of three on the album, about the carefree days of growing up and starting a band.

There is more storytelling on this album and fewer instrumental interludes, the only such interlude being “Paradise Stars.” The songs on Last Night on Earth are mostly narrated in third person, as if Fink was a camera capturing moments of other people’s lives, but this technique allows Fink to stay one step short of getting too personal. Instead, Last Night comes across as being a little forced, as if Fink is trying to prove to the world that he’s moved on before he really has.

Noah and the Whale has many worthwhile qualities, but the most mesmerizing is its ability to be honest and pour its souls into its songs, a quality that gets a little lost in this album. That’s not to say that Last Night on Earth isn’t a good album, or that a band needs to go through a heart-wrenching break-up to get personal. The album is a great album, but it’s a little too generic — any other band could have written a similar album with similar messages. Perhaps fans are expecting a little too much out of the band as First Days raised the standards, but it’s hard not to feel a little disappointed that Noah and the Whale went from being extraordinary to just ordinary.