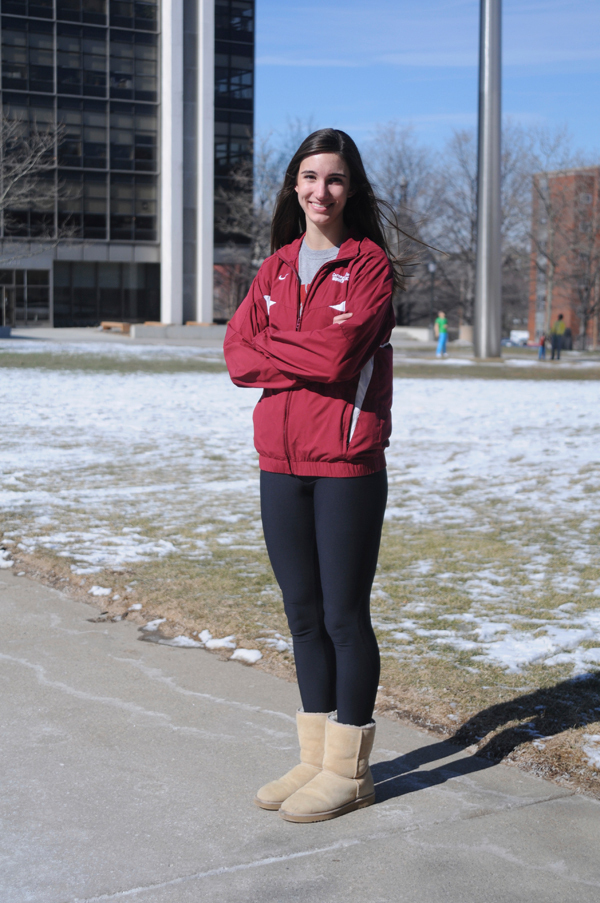 First-year Jacqueline Guevel became a track and field celebrity this week for the Tartans. She managed a sixth- place finish in the 55-meter hurdles at the 2011 NCAA Division III Indoor Track and Field Championships on Saturday, March 12.

Jacqueline was invited to the indoor track and field championships after winning the University Athletic Association’s (UAA) 55-meter hurdle competition on Saturday, March 5. She finished the UAA competition race with a time of 8.33 seconds.

Partnered with a UAA title in the 55-meter dash, Guevel brought home the most outstanding performer title in running events and women’s rookie of the year title in the UAA.

At NCAAs, preliminaries for the 55-meter hurdles were on Friday, March 11, with the finals the following day. In the preliminary rounds, Guevel set a new school record of 8.23 seconds, beating her previous school record. That was the second-fastest time in her heat, behind Jamie Thompson of Rowan University, who ran the race in 8.13 seconds. Guevel’s finish was enough to advance her to the finals the following day.

On the day of the championships, Guevel became an All-American. Guevel ran the 55-meter hurdles with a time of 8.29 seconds to claim sixth place. This was the 25th All-American award given to runners under the tutelage of coach Dario Donatelli.

Her teammates have the utmost respect and admiration for the first-year. As sophomore sprinter for the men’s track and field team Noel Titus said, “Jacqueline’s finish was huge.... We are really happy for her.”

When sophomore hurdler Leila Bouabdellaoui was asked about her teammate Guevel, all she could say was, “She’s amazing. She’s a superstar.”