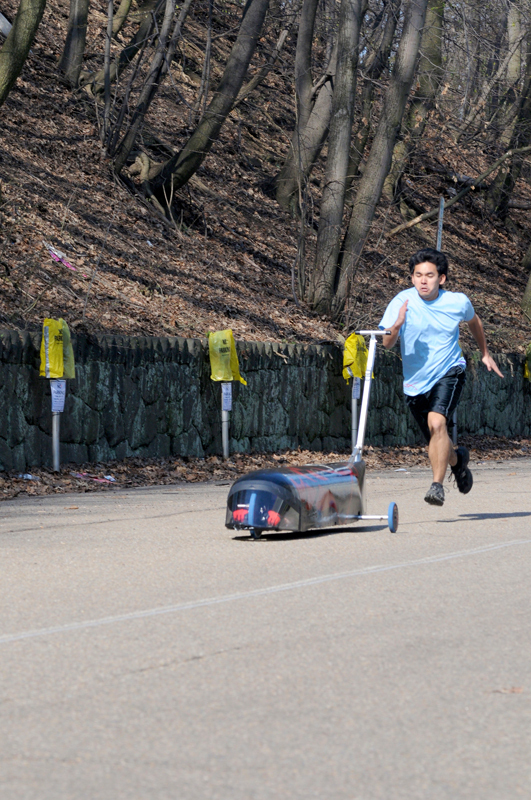 The preliminary races of the 92nd annual sweepstakes competition occurred last Friday, one of the most enduring traditions of Carnegie Mellon culture. Teams from 11 different organizations, classmates, alumni, and Pittsburgh community members began gathering around Tech Street and Frew Street early in the morning to prepare for the event. Months of grueling early morning practices culminated in the seven women's heats and ten men's heats that began at 8:10 a.m. and lasted until 12:30 p.m. Fringe A was the official winners of the men's races and SDC A the official winners of the women's races

The problems that had plagued the women's heats last year were noticeably absent, with only one team not completing the race and two teams disqualified. Spirit A, racing their new buggy Mamapbazuko, spun out in the third heat after starting off with a strong lead over CIA B and Student Dormitory Council (SDC) C, both of which qualified for the final races. Disappointing as it was for the teams which didn't make it to the finals, this result wasn't unforeseen; as WRCT's announcers explained, practice runs were plagued by troubles in the chute. Sigma Phi Epsilon B was disqualified in the fourth heat and Alpha Epsilon Pi A was disqualified in the fifth heat for a handlebar violation. Neither of these had any bearing on the final results. SigEp redeemed themselves in the final heat when their A team finished with a final time of 2:50, which qualified them for the finals.

The last women's heat was one of the most suspenseful races of the day. While SDC A had originally finished the race with a time of 2:30, which left the team in first place, the entire heat had to be re-rolled due to the officials accidentally signaling a false start. In order to maintain their first place rank, the team had to finish under 2:35.075. Despite their strong initial run, they finished on the cusp of 2:35, leaving spectators wondering whether they would indeed keep their position as first place team. After several minutes of tense waiting, the officials announced the final time as 2:34.963.

The men's teams were not so lucky. Disqualifications and technical difficulties took out 11 of the 29 teams, including a particularly bad crash between Sigma Nu A and AEPi A in the ninth heat that resulted in the event being called to a standstill to wait for an ambulance to arrive. Like their female teammates, Spirit's teams were plagued by troubles in the chute with two of their four teams spinning out. However, their A and B teams both qualified for finals. Spirit A was especially well-received by the audience after their Hill 2 pusher, sophomore mechanical engineering major Ben Antoine, followed up his push into the chute with a somersault.

For the most part, however, the hours of preparation paid off for this year's teams. The competition was rough and suspenseful and while there were favorites, there was no clear winner until the very last heat. The most favorably predicted teams were SDC A, Fringe A, and PiKA A. SDC A was the favorite to win, Fringe A had high expectations with their new buggy, Bonsai, and PiKA A was looking to compensate for their poor performance last year. PiKA A clocked in at 2:08.37 in the eighth heat, which put them at third place in the standings. However, they were disqualified for violating the five second rule — according to the Sweepstakes by-laws, "after the starter announces that there are ﬁve seconds remaining to the start of a heat, nobody except the drivers and Hill 1 pushers of the entries in that heat, and the starter, may be within ﬁve feet of any of the buggies in that heat, until that heat begins." PiKA's team was disqualified for being away from the buggy for only four and a half seconds. When asked about the five second rule, PiKA's Sweepstakes Chair, senior mechanical and biomedical engineering major Keshav Raghavan, said, "I mean, overall the rule is pretty black and white.... I do think one thing maybe in the future is that the spirit of the rule is not to disqualify teams.... There needs to be a more fair system of disqualification because it shouldn't be an all-or-nothing type of thing."

Fringe A, the only team in the ninth heat to finish due to the SigNu A and AEPi A crash, looked as if it was going to beat the record time for men, which was set at 2:03.30 by SDC in 2009. While that record remains to be broken, Bonsai's performance certainly validated all of the hype attributed to it with a time of 2:05.08. The final heat, which featured SDC A, CIA A, and SigEp B, was the perfect end to the day's races. SDC held a significant lead throughout the race and nearly matched Fringe A's time. The time was too close to call by eye, but after several minutes of anticipation the official scoreboard had SDC A's time listed as 2:06.189.

Unfortunately, heavy rain throughout the night and early morning resulted in the cancellation of the finals, leaving Fringe A the official winners of the men's races and SDC A the official winners of the women's races. At the conclusion of the events, spectators and competitors alike were pleased with the results. "It was cool to see the culmination of a year of hard work," spectator Tanner Whyte, a first-year electrical and computer engineering major, said. "It was definitely worth getting up early to watch."