Performance art is on a roll 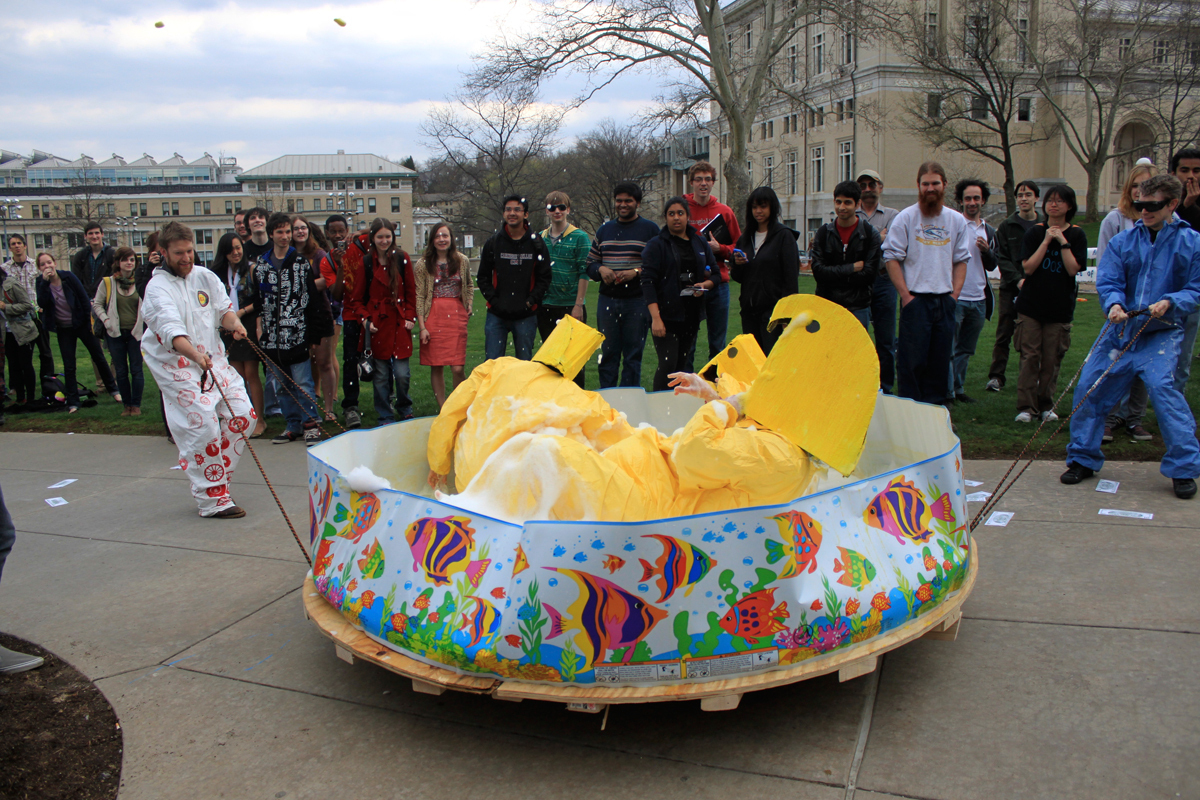 Every year at Carnival, students eagerly gather to watch Buggy pushers race to the finish line in competition for first place. Last Monday, though, a different sort of race took place — one where “buggies” thrust, bounced, and rollerbladed their way to the finish line, and everyone received a prize. Outside Doherty Hall, the second annual Anti-Gravity Downhill Derby took place, providing a quirky and colorful antithesis to the traditional buggy Sweepstakes.

After several musicians from the Pipe Band provided a musical introduction to the event, visiting professor and host Pat Olezsko — a performance artist known for her use of elaborate costumes and props — welcomed everyone to the event. Her speech immediately let the audience know that this was not a typical race; “I don’t have to tell you, but [this event is] all about acting.” She then introduced the first “buggy,” which was more like a parade float than a buggy. The float featured a lifeguard stand with two decidedly-uncaring lifeguards on top, and an “ocean” made of blue plastic bags.

This was, however, only a small taste of the ridiculousness to follow. One of the subsequent entries in the derby was the Hot Rod Bod, for which a woman in a shiny red bodysuit crouched down in a cart with wheels. With a license plate reading “Jail B8” stuck onto her bottom, she began to thrust forward to make the cart move as Olezsko commented, “She’s humping her way all the way to the finish line!” Although she occasionally needed someone to come and push her, she did indeed thrust all the way to the finish line.

The next entry was the Omega Omega sisters, or the “OMG OMGs,” as they called themselves. Three girls dressed in tiny black sweatpants, pink Ugg boots, and long, blond wigs pranced their way down the track on a fake pink treadmill that had wheels on the bottom. In one of the funniest acts of the event, two bikinied women and one shirtless man pushed a woman dressed as a pimp in a baby carriage. The “pimp” obnoxiously ordered the women to fan him with palm branches as “he” shoved fake dollar bills into their bikinis, then threw spare bills at the audience standing on the sidelines.

Once they reached a finish line, a girl in a long ball gown came running out to the start of the race, exclaiming that she had to get to the ball, but didn’t have any way of getting there. After singing for her animal friends to help in a manner reminiscent of Giselle in Enchanted, the princess delightedly ascended a bouncing horse on wheels with the help of derby assistants. She then merrily bounced her horse down to the finish line, waving like true royalty to the audience as she passed.

In perhaps the oddest act of the evening, several graduate art students dressed as Peeps flailed about in a baby pool full of soapy water and threw wet, soapy Peeps at the audience. Their float, which had spilled over before the derby began, fell apart before the group could reach the finish line.

Out of all 17 acts that participated, the most interesting — and sensical — was the final act, wherein Olezsko donned a goofy, overly-patriotic outfit, climbed aboard a float made of oil drums, and chugged out of a bottle labeled “Crude Oil,” spewing out the oil onto members of the audience as the float drove past them.

After handing out quirkily-titled awards — the first float, for example, received the “Smoke on the Water Award” — and having the the Pipe Band members play one last closing number, the Anti-Gravity Downhill Derby came to an end. Hopefully, however, it will be back again next year, as a colorful and quirky “alternative to the ever-exciting Buggy races,” as Olezsko herself drily said.