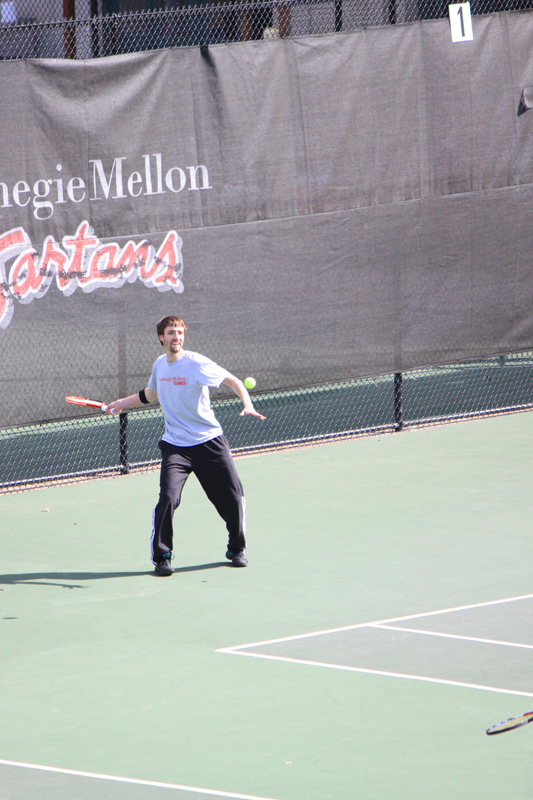 Senior Bobby MacTaggart lines up for a forehand during a home match. MacTaggart and senior Alex Nemerov won at No. 1 doubles last Sunday, but Carnegie Mellon lost the third-place UAA match to Chicago. (credit: File Photo)

The Carnegie Mellon men’s tennis team beat Brandeis University, but lost to Emory University and the University of Chicago in the University Athletic Association (UAA) Championship, earning the Tartans fourth place in the tournament.

The match for third place against Chicago, played Sunday, April 17 on the Brandeis campus in Waltham, Mass., was a tight one. The Tartans lost 5–4.

The Tartans led in doubles play with two wins and one loss. Sophomore Jooho Yu and junior Forrest Grinstead won the Tartans their first match with an 8–4 win at No. 3 doubles.

Seniors Alex Nemerov and Bobby MacTaggart put Carnegie Mellon at a 2–0 advantage by winning at No. 1 doubles with a score of 8–2.

“We were pretty excited about the way we came out of doubles,” MacTaggart said. “We looked forward to having the top billing.”

In the singles division, things were going less desirably. Although the doubles team had earned the Tartans a coveted lead, Carnegie Mellon went down 4–2 in singles play. Sophomore Duke Miller helped bring the Tartans back a bit with a 2–6, 6–1, 6–3 win at No. 2 singles. Nemerov, at the No. 1 singles position, won after a three-set match with scores of 6–4, 4–6, and 7–5. MacTaggart, junior Jeremy King, Yu, and first-year Julian Pearlman lost their singles contests.

“With our advantage in doubles,” MacTaggart said, “we were obviously pretty disappointed by the way that things turned out.”

“We played a good weekend with a lot of close matches,” first-year Mason Radford said. “Emory was a really tough team to beat, although I do think that we should have beat the University of Chicago. In the end, we played a tough fight.”

The No. 17 Tartans finished UAA Championship play with a season record of 14–10. Individual players will be competing in the NCAA regional tournament next month.