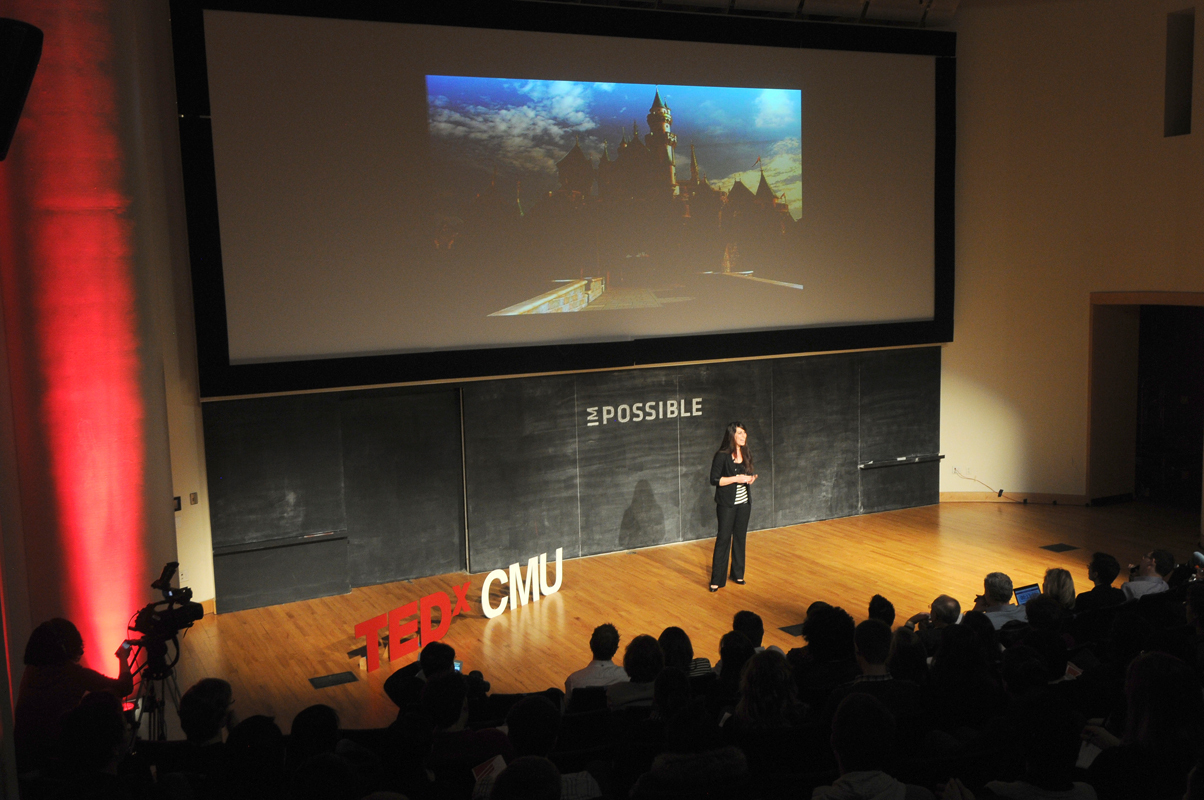 Amber Rae, a Google employee, discussed how the traditional “ladder to success” business module is archaic and students should instead plan their lives like a smartphone, customizing it with “apps.” (credit: Nicole Hamilton/Comics Editor) 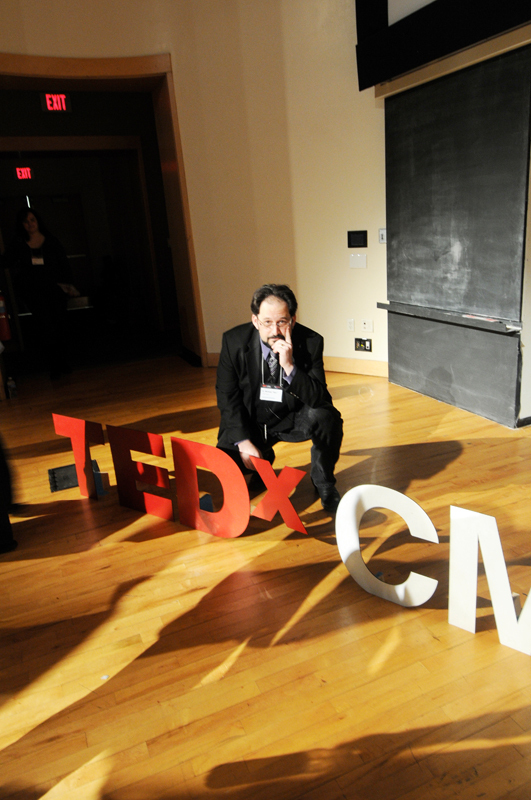 TEDxCMU’s 2011 conference was held in McConomy Auditorium Sunday. TEDx, which stands for “independently organized TED event,” is an offshoot of the Technology, Entertainment, and Design conference (TED) series. TED brings together speakers on a wide variety of topics to give lectures, which are available for free online. TEDx events gather speakers on a local level and are organized by individual communities, schools, or organizations. Nine Carnegie Mellon students organized this year’s event, the team led by senior biological sciences major James Pan. This is the second TEDx event at Carnegie Mellon; the first was held last year.

Many of the event’s attendees found TEDx through TED.

“TED, of course, is really famous,” said Ranjani Kumar, a master’s student in information systems management. “I remember the year before I started here, hearing a couple of seniors talking, saying [TEDx] is really good, and you shouldn’t miss this.”

Though only 400 seats were available for the event, TEDxCMU’s website reported that organizers received 909 ticket requests. In keeping with TED’s motto of “ideas worth spreading,” the lectures were available streaming online for people who could not get tickets. “It’s important for us to reach a large demographic here in Pittsburgh through various mediums and using the latest technology so no one misses out on this amazing event,” said Jeesoo Sohn, a sophomore music major on TEDx’s publicity team.

Blake, a self-professed ‘self-help junkie,’ spoke about “what’s possible for creating freedom in your life and your work.” Blake’s lecture pointed out the deficiencies in the traditional “career ladder” paradigm.

“It’s so linear; it’s very fixed,” Blake said. “It’s either straight up or off into oblivion.” It also, according to Blake, creates a false impression that there is a fixed endpoint at which a person’s career stops changing. In reality, said Blake, “CEOs, presidents, people at the top of the game, they still want to grow, they still want to learn, they still want to develop, even at the peak of their careers.” Instead of a career ladder, Blake suggested the metaphor of a ‘career smart phone,’ on which people fluidly download the ‘apps’ that they need at any given time. She emphasized that people don’t have to know exactly where they’ll end up in order to make positive progress.

Glenn Willen, a Carnegie Mellon alumnus with a B.S. in computer science who now works for Google Pittsburgh, enjoyed Blake’s lecture. “I’ve been out of CMU now for three and a half years,” said Willen. “I’ve been trying to figure out where I’m going. If nothing else, it was just inspiration to hear that I don’t have to know everything yet.”

In contrast, Cass was firm in his belief that people who want to advance must know their goals. Cass is a graphic designer who, he said, built his career partially on his strong Internet presence. He spoke on “building a personal foundation, using branding, blogging, and social media.” Cass explained how to design one’s website, blog, and general online presence so as to advance a career. Where Blake spoke about general career philosophy, Cass focused on specific details that people could use to make their websites better, such as putting photographs next to testimonials, which he said increases believability.

Von Ahn’s lecture was particularly popular. Described by Chemers as “the great, wild U.S. marshal of the Internet,” von Ahn spoke about his crowdsourcing initiatives. He is the inventor of CAPTCHAs — the distorted words that Internet users have to type in order to buy tickets and create accounts on social network sites. CAPTCHAs prove that it is a human at the keyboard, preventing people from using scripts to, for example, buy thousands of tickets to a concert, two at a time. According to von Ahn, people spend an average of 500,000 hours every day typing in CAPTCHAs.

Von Ahn then created reCAPTCHA, which puts the time being spent by Internet users to good use. With reCAPTCHA, people can simultaneously prove that they are human and digitize old books. The distorted words presented by reCAPTCHA are actually old printed text which computers cannot parse. Every time a user types a word into reCAPTCHA, he or she is digitizing it. According to von Ahn, 100 million words a day are digitized by over 750 million distinct people — in other words, 2.5 million books a year are being digitized by over 10 percent of the world’s population.

“It is numbers like these that motivate my research agenda,” said von Ahn. Prior to the Internet, he said, even the most major projects, such as the one which put a man on the moon, involved at most 100,000 people. “Coordinating more than 100,000 people, let alone paying them, was essentially impossible,” he said. But the Internet has changed that. “If we can put a man on the moon with 100,000 [people], what can we do with 100 million?”

Von Ahn has the answer. With his newest project, DuoLingo, which has not yet launched, he hopes to translate the Internet. In the process of learning a foreign language for free, people would be able to translate real-world content. When all the beginners’ translations are combined, said von Ahn, they are as accurate as that of a paid translator.

“It’s sort of a slice of the future,” Willen said. “It’s going to be really interesting to follow up on.”