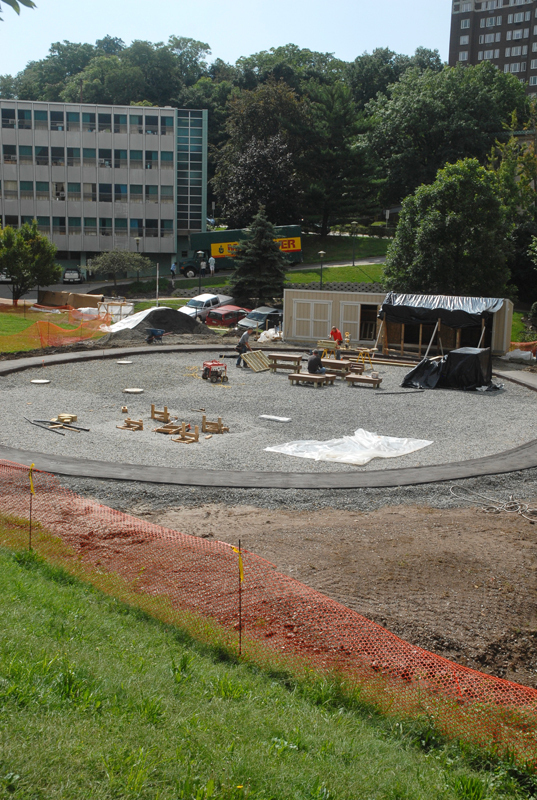 During the second week of August, crews began the first phase of the construction: relocating the Children’s School playground to Donner Ditch. Construction has been ongoing since.

Jendoco Construction initiated the second phase of the project last Tuesday by erecting scaffolding on the west façade of Margaret Morrison Carnegie Hall. According to the construction crew, erecting the scaffolding is expected to take two to three weeks. Once the installation is completed, the main work to restore the exterior of the building can officially begin. Each phase of the project relies on completion of the other; the overall restoration is expected to take 12 to 18 months, according to Campus Design.

Campus Design stated that the primary reason for undertaking the restoration project was previous water seepage behind the building’s bricks that caused damage to the masonry. Campus Design and Facility Development staff also planned to reconstruct the third-floor balustrade by installing a through-wall to protect it from future water damage.

According to its website, Campus Design and Facility Development “plan[s] to replace current hot water risers for perimeter heat, as well as install separate hot and chilled water risers for future HVAC capabilities. In order to accommodate the work site, the Children’s School located in [Margaret Morrison Carnegie Hall] will temporarily relocate their playground to Donner Dell.”

Brennen Garrison, a graduate student in the School of Architecture, has been an intern for the campus design department since June. He has been highly involved with the Margaret Morrison Carnegie Hall restoration, including the Children’s School playground relocation.

“This location was selected in coordination with the senior leadership at the Children’s School and with the Office of Student Affairs,” Garrison said in an email. “It provides for the children the safest and most suitable site proximate to the school.” Months of planning went into designing and relocating the playground. The project team has been working on it since the end of last semester.

The children’s safety was a concern in the relocation and re-design of the playground. Donner Ditch is a more open space than the previous location next to the tennis courts; because many student groups use Donner Ditch as an area for their events, Campus Design made safety a priority.

“As usual the children will be monitored by multiple teachers and aides when they are on the playground,” Garrison further explained. “When the playground is finished, there will be a fence surrounding it with limited gate access to keep intruders out. On the outside of the fence there will be grasses planted to help screen the sight of the fence and to keep people from coming directly up to the fence. The fence and grasses will help separate the playground from the remainder of Donner [Ditch].”