Jacquie Shaw a top-tier scorer and rebounder for Tartans 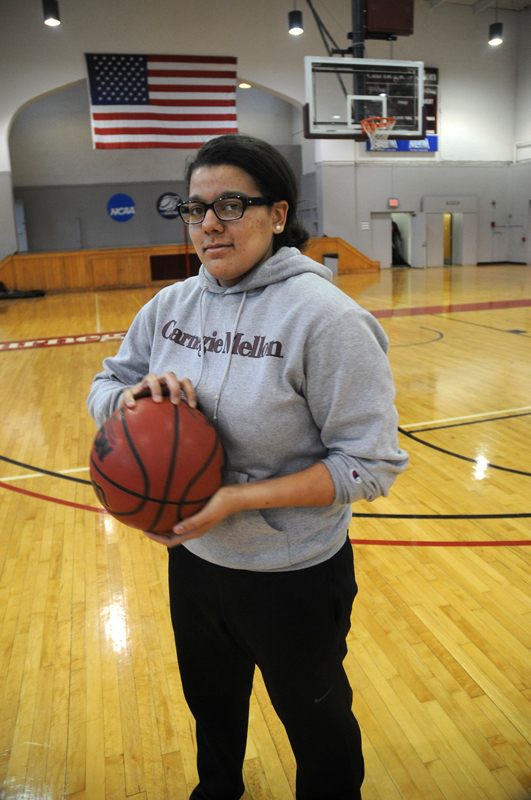 Shaw is among the team leaders in scoring and rebounding in the early 2012 season. (credit: Celia Ludwinski/Operations Manager)

Sophomore mechanical engineering major Jacquie Shaw has been one of the top performers for the women’s basketball team this season. She is third on the team in scoring and rebounding, and second in field goal percentage, helping lead the Tartans so far in the 2012 season (6–9, 0–4).

Shaw is averaging 11.1 points per game on 51.0 percent shooting. She is also grabbing 5.7 rebounds a contest.

Her most impressive performance this season was in the Tartans’ opening game against Elmira College last November, where she lead the team with 24 points and nine field goals.

This season, Shaw’s goal is to improve her overall record and play. “I am sure you know of our less than successful record last season [(...)] and we just want to get better every single day,” she said.

Her teammates respect her abilities and her focus on the basketball court. “Jacquie is a hard worker, she comes to practice every day focused and ready to work,” said junior forward Emily Peel. “She is also a great competitor and aggressor in games. She looks to drive to the basket, get steals, and set up her teammates.”

Shaw couldn’t put her finger on what she thought was the funniest memory of the team, but admitted there are a lot of funny moments. “Jennifer Elkin is definitely the clown of our team. She is always instigating something or singing with her voice of an angel to keep things lively,” Shaw said.

Shaw loves the lifestyle of a college athlete, as she is fond of traveling for road games. “I’m from the West Coast so I’ve never been to a lot of these cities before, and though we don’t spend a lot of time in each city, I appreciate it. Last year was the first time I’d ever been to New York, and it was cool to walk around Times Square,” Shaw said.

Along with seeing new places, Shaw and her team have a lot of fun on the road. “On away trips, I just like to chill out and listen to music,” she said. “It’s nice to get away from campus. Since I don’t have a television in my house, I also can’t complain about the television and hot tub that hotels provide.”

Another part of the team’s culture is eating. “I think the basketball team will eat about anything, especially if it’s free. But I must say we have a soft spot for Chipotle and pasta. We eat a lot of pasta,” Shaw described.

When asked what she was planning on doing post-graduation, Shaw said, “After completing my degree, I have no idea what I would like to do. Maybe something with engines.”

The Tartans play the New York University Violets (9–6, 1–3) this Friday on the road in a conference rival match-up.