Is Westbrook's extension a good call? 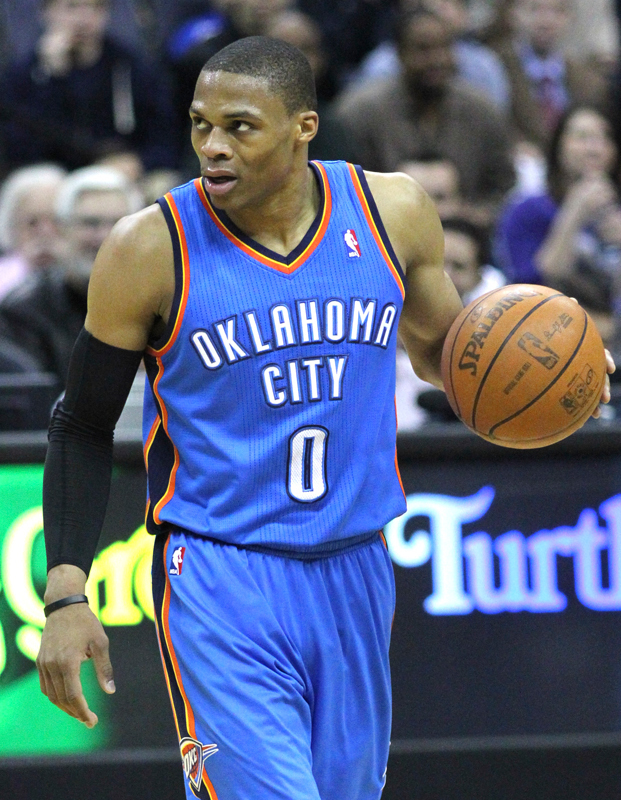 The epic saga of the NBA has begun since we last covered it. The lockout-shortened season of 66 games in 123 days is a formula for excitement, with more NBA games per day than one could have ever hoped for. However, the big news this week is that Oklahoma City Thunder point guard Russell Westbrook signed a five-year, $80 million contract extension. Amidst this hectic, compressed season, did the Thunder prematurely pull the trigger on this deal with its point guard?

Westbrook’s play since being drafted fourth in 2008 by the Seattle Supersonics (and moving to Oklahoma City in 2008) has been dominant, dynamic, and superstar-worthy. His career numbers are gaudy, and his quickness and athleticism are only matched by his draft-mate Derrick Rose, the number one pick of that draft and the reigning MVP. Yet Westbrook has always been criticized for his erratic shooting, his questionable decisions, and his shoot-first mentality — given that he’s a point guard and given that his teammate, Kevin Durant, is a two-time scoring champion.

His line of 17.9 points per game, 7.0 assists per game, and 4.8 rebounds per game is impressive, and over the last two years he’s averaged 20-plus points per game. But Westbrook’s shooting percentage is a lukewarm 42.3 percent for someone who shoots as much as he does. His 27.4 percent shooting from the three-point line is equally mediocre.

Additionally, the suspect decision of Westbrook’s contract extension is proven more questionable by the well-documented rifts between Durant and Westbrook. Earlier this year, during a time out, they had an argument that had the media riled. When asked, they said they have no issues, but the camera never lies. Both are potent scorers and have garnered the right to shoot a high volume of shots; given Westbrook’s efficiency woes, why should the Thunder hold on to a point guard who takes shots away from the more efficient Durant (46.3 percent career shooting, 49.8 percent this season)? Having two volume scorers is not a good formula for a championship run.

Westbrook is most definitely a superstar, but he is not the right fit for Oklahoma City. Durant was signed to a big contract extension last year, signifying the Thunder’s desire to hold on to him. Given the chemistry between the two players, the extension led most to believe that Westbrook would leave the Thunder either by trade or free agency.

Westbrook’s contract extension makes sense if the trade route is the direction the Thunder is heading in. Even though Westbrook is having a down year, no team would argue his superstar status, and many would jump at the chance to trade for him.

An interesting trade that comes to mind would be to make a move for the Boston Celtics’ all-star point guard Rajon Rondo. Celtics’ general manager Danny Ainge recently reported that they would be willing to blow up the “big three” of former all-stars and future Hall-of-Famers Ray Allen, Paul Pierce, and Kevin Garnett if it meant a better situation. Although Rondo is the piece they would like to hold on to, if those three players were to be elsewhere next season, building a team around the shoot-first Westbrook makes more sense considering that, sans Jeff Green, the pass-first Rondo would have no good scorers to pass to. Westbrook would have the chance to play with his former teammate, Green, and would be excellent for helping the storied franchise rebuild, especially if Ainge blows up the Celtics.

For the Thunder, Rondo’s rebounding and defense matches Westbrook’s, yet he is a much better passer and decision maker. Rondo’s 9.4 assists per game are second in the NBA, and those assists in Oklahoma City would be effectively dealt to Durant and guard James Harden, who could fill the second scoring option role nicely. Also, you can’t forget how close Rondo and now-Thunder center Kendrick Perkins were when they were both in Boston. Rondo was very upset when the trade was made that sent Perkins to Oklahoma City.

The Thunder is favored to win the Western Conference — but Westbrook might not be part of the formula that could bring the Larry O’Brien Trophy to Oklahoma City. Given how quickly the season is rolling along and considering the approaching contract extension deadline, maybe the Thunder felt pressured to pull the trigger on keeping Westbrook. Only time will tell if this is a good parntership and only a championship will prove its worth.