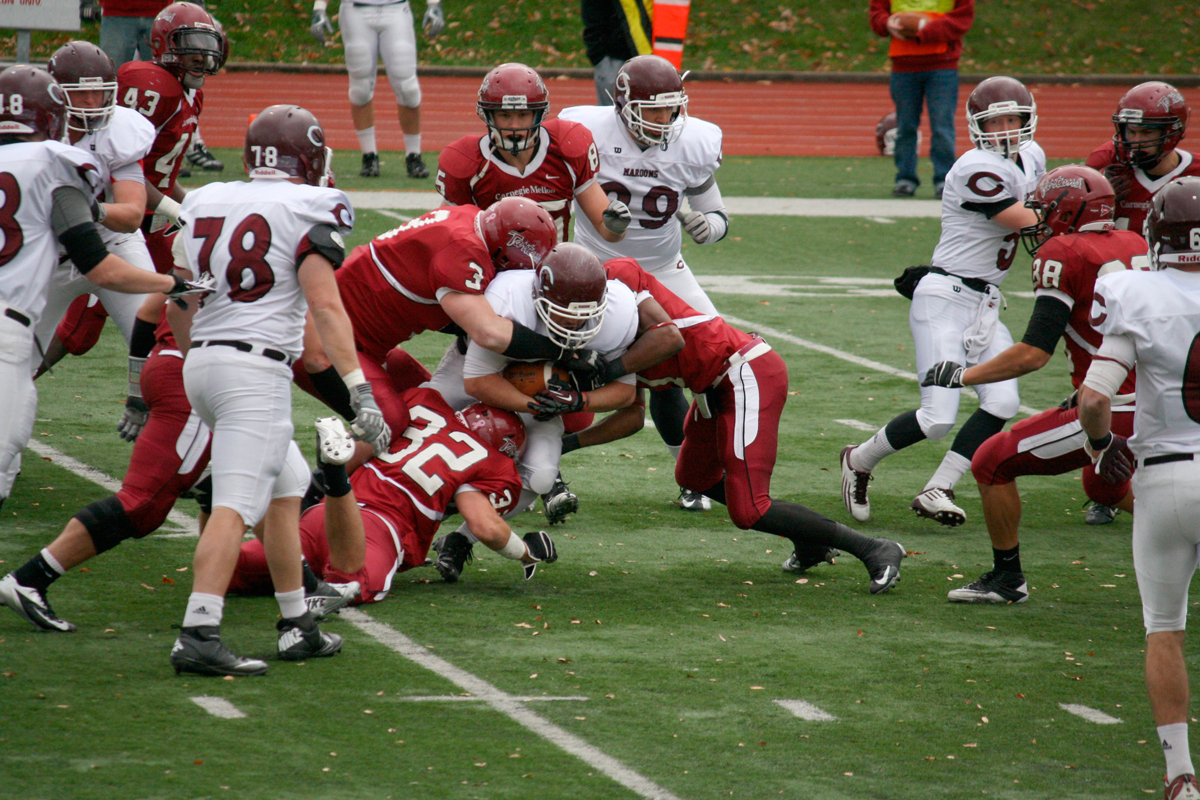 The Tartans displayed their strong defense on Saturday by tackling a University of Chicago player. (credit: Kelsey Scott/Staff Photographer)

After a poor offensive showing against the Washington University in St. Louis Bears two weekends ago, the Tartans rediscovered the offense that had them at 4–0 by the end of September.

The Tartans played the University of Chicago Maroons on Saturday in their last home game of the season, defeating them 31–14 due to a tremendous rushing performance.

This victory brings the Tartans to 6–3 in the season and 1–1 in conference play.

The Maroons’ season fell to 4–5 in the season and 0–2 in conference play.

Senior running back Patrick Blanks lead the Tartans in their victory over the Maroons with his 159 rushing yards and three touchdowns, the Tartans put together 235 yards of positive offense on the ground.
Blanks is averaging 82.6 rushing yards per game and has scored 10 touchdowns this season, both of which are highs on the team.

This was the fifth time in Blanks’ career and the third time this season that he rushed for three touchdowns in a single game.

“It was clearer [Saturday] than ever before how much Patrick means to our offense and the team,” junior quarterback Rob Kalkstein said. “We are a different team when he is on the field.”

Junior inside linebacker Akwasi Brefo led the squad with 10 tackles.

With 32 receiving yards left for the upcoming game against Case Western Reserve University, he has the potential to break the record very soon.

First-year kicker Connor Young kicked a career-long 45-yard field goal in the third to put the Tartans up 17–14. Carnegie Mellon never relinquished the lead after that score.

On Saturday, the Tartans will close this year’s campaign on the road against the Case Western Reserve Spartans. Kickoff is at 2 p.m.

Last season, the Tartans lost to the Spartans in a shootout, losing by a score of 38–24.

If the Carnegie Mellon offense can put up offensive numbers reminiscent of those in their performance against the Maroons this past Saturday, the Spartans should prove to be no problem for the Tartans.