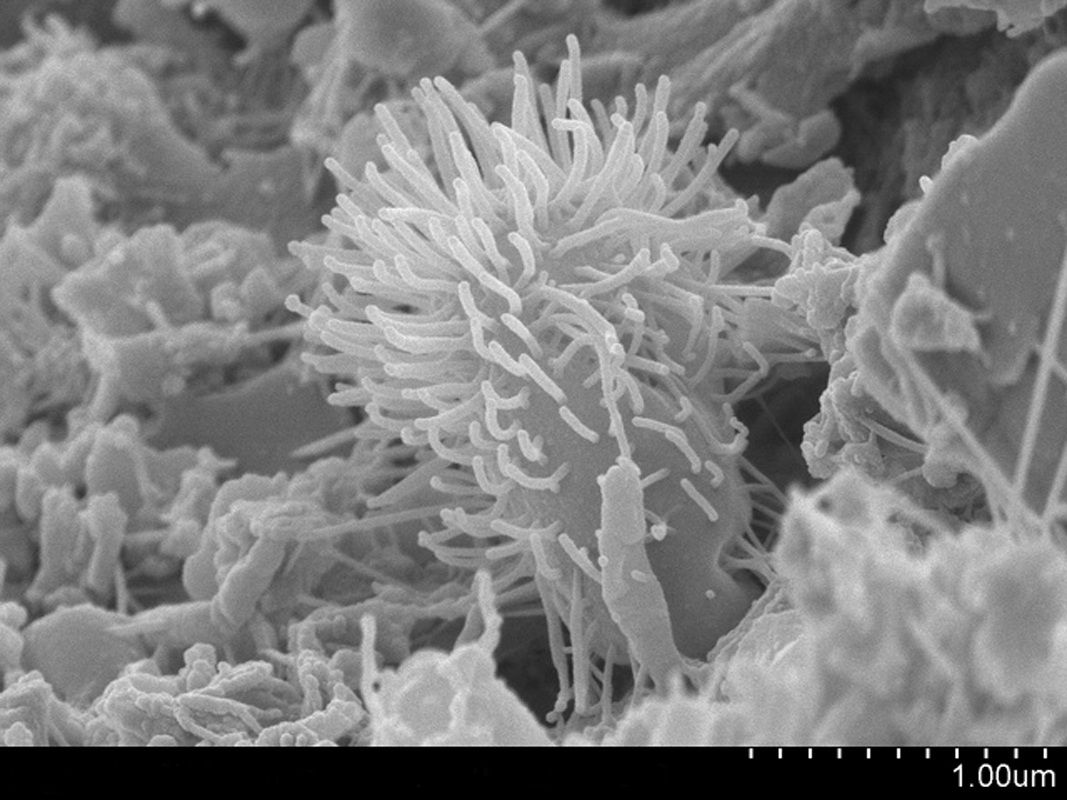 Biofilms, like the one above, are harmed less by silver nanoparticles than previously thought, according to new Carnegie Mellon research. (credit: Courtesy of adonofrio)

A group of Carnegie Mellon researchers have made huge strides in examining the exact effects of silver nanoparticles on bacteria living in gelatinous biofilms. The results of their research indicate that the nanoparticles are less toxic on biofilms than was previously suspected, a finding that has positive implications for the effects of these nanoparticles on the environment, as biofilms are the most common form of life on Earth.

CEINT (pronounced like “saint”) specializes in identifying the effects of humanity’s increased usage of nano-materials on the environment, specifically on microbial and single-celled lifeforms whose size make them the best candidates to be directly affected by these tiny nanoparticles.

“The focus of all the work we do in our group is the behavior of engineered nanoparticles in environmental systems,” said Wirth, who led the team’s research.

According to Science Daily, a nanoparticle is a microscopic particle with at least one dimension less than 100 nanometers in size. When chemical compounds are shrunk down to this size, their physical and chemical properties often change in unprecedented ways. Recent chemical engineering breakthroughs have allowed manufacturers to leverage these properties to enhance many everyday products.

Nanoparticles are used in scratch-proof eyeglasses, stain-repellent fabrics, and self-cleaning windows. In computer engineering, carbon nanotubes are being explored to create nanoscale circuitry and even bendable electronics.

Silver nanoparticles — the ones the research team worked with — are popular for their antimicrobial properties, so they are used in items like athletic clothing, food packaging materials, and even some brands of toothpaste. Though they are commonly used in these and other consumer products, there has been some recent concern over how easily silver nanoparticles can leak into the environment, where their hazardous effects on bacteria may damage an area’s ecology.

“Let’s say you have [silver nanoparticles] on a toothpaste,” Tilton said. “You brush your teeth [and] it goes into the water, which ends up in a waste water treatment plant. The sludge — the end product of waste water treatment — is actually very rich in organic compounds. It’s often used as fertilizer.... Now you’ve just realized that there’s a route for it to go from your socks to the sludge to a farm field, possibly being taken immediately into the roots of crops. It’s not unreasonable to think that there’s a risk here.”

A substantial amount of work has already been done to show that silver nanoparticles are harmful to free-roaming bacteria. A less-explored aspect involves their reactions with biofilms, or thin films on surfaces (like rocks), with a high density of bacteria protected by a gelatinous polysaccharide substance they produce. It was a study of silver nanoparticles in this environment that yielded the research team’s result.

“When the bacteria are in a biofilm, silver nanoparticles are still toxic, but much less toxic than they are to bacteria swimming around freely in water,” Tilton said. “It’s a difference of five orders of magnitude.... What we think a big part of [this] is that the gelatinous matrix they’re growing in prevents the particles from getting in and actually making direct contact with the bacteria.”

To determine the toxicity of silver nanoparticles, the researchers cultured various biofilms in vitro and then exposed them to different levels of nanoparticles. The toxicity of each level was determined via viability assays, where fluorescent dyes are injected into the biofilm containers.

This process was also used to ascertain that the ions left behind when silver nanoparticles dissolve are more toxic than the actual nanoparticles themselves.

“We’ve been able to show that a large fraction of the toxicity of silver nanoparticles is actually due to the silver ions that they release when they dissolve,” Tilton said. “We believe that the polysaccharides in that [gelatinous] matrix can bind to the silver ions, and if the silver ions are bound up in that matrix, they’re not going to get to the bacteria. It’s sort of like it’s behaving like a sink or a sponge for the silver ions.”