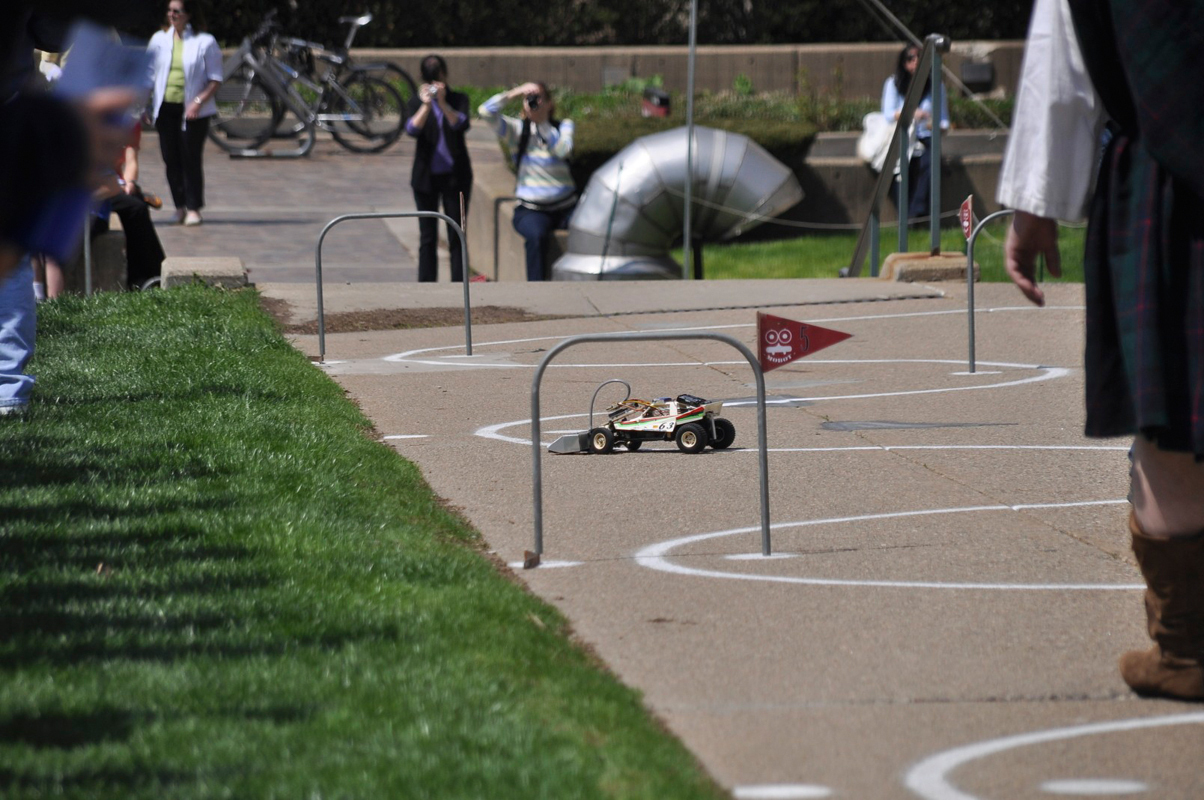 A mobot makes its way down the course during the 2011 Mobot Races. This year’s finals will take place Friday as part of Spring Carnival. (credit: File photo by Alan Vangpat)

Students were turning wrenches, twisting screwdrivers, and writing code this past week in preparation for the upcoming Mobot competition, the annual “mobile robot” contest hosted by the School of Computer Science. The activities coincided well with the fact that it was National Robotics Week, which celebrates robotics research in the United States.

Mobot, which first made its debut at Carnegie Mellon 17 years ago as an alternative to the Buggy races at Spring Carnival, lets students from any discipline compete in a robotics challenge. Members of participating teams assemble mobots, autonomous self-driving robots equipped with motors and sensors that enable them to follow a white line painted on the ground and pass through systematically positioned gates. The course is located on the walkway in front of Wean Hall; teams are judged on accuracy and time.

Last Wednesday, the Mobot Committee hosted the $99 Mini Challenge, an event to allow Mobot participants to receive technical assistance with their mobots as well as compete in two smaller events. The “Slalom Challenge” required mobots to successfully pass through all of the gates in the slalom portion of the course, and the “Decision-Point Challenge” required mobots to make it past a section of the course consisting of diverging and converging white lines designed to confuse the vehicles.

“Imagine teaching someone how to ski a slalom, a downhill ski course. We’re teaching a robot to do the same thing,” said Nolan Hergert, a senior electrical and computer engineering major and a member of the $99 Mini Challenge’s winning team. Team Gaussian Blur — made up of Hergert and fellow senior electrical and computer engineering majors Billy Keyes and Chao Wang — cleared the slalom section of the course in 36.74 seconds.

Keyes explained that making a robot perform the task of following a white line is not nearly as easy as it sounds. “It’s easy for you to just say, ‘It’s the white paint on the ground!’ But how do you explain that to someone that doesn’t necessarily understand what white is? Or what a line is?”

The Final Mobot Slalom Races, to be held on Friday, will crown the team whose mobot successfully passes through the most gates in sequence in the shortest amount of time. Each team will be allowed two course runs, and each team’s best performing run will be used to compare to other teams’ best performances.

The event is sponsored by Lockheed Martin, General Motors, Two Sigma, Google, and Misumi USA. Lockheed Martin has “embraced the ability of our students and the many teams to find their unique solutions to some or all of the issues involved, at all levels of expertise,” said Catherine Copetas, the School of Computer Science assistant dean for industrial relations. “GM is a newer sponsor, and it goes without saying their involvement is a great testimonial to the students and the effort invested in these races.”

Beyond Carnegie Mellon, last week marked the third annual National Robotics Week. The U.S. House of Representatives passed a resolution in 2010 applying that designation to the second full week in April. Carnegie Mellon plans to have an organized celebration on Friday, involving Robotics Institute lab tours, lectures by robotics professors, and the Mobot race finals.

Hergert supports the goal of recognizing robotics. “Taking a week and celebrating all these devices and appliances and their creators that we take for granted merits a week in my opinion,” he said.