CMU physicists on the frontier of quantum computing 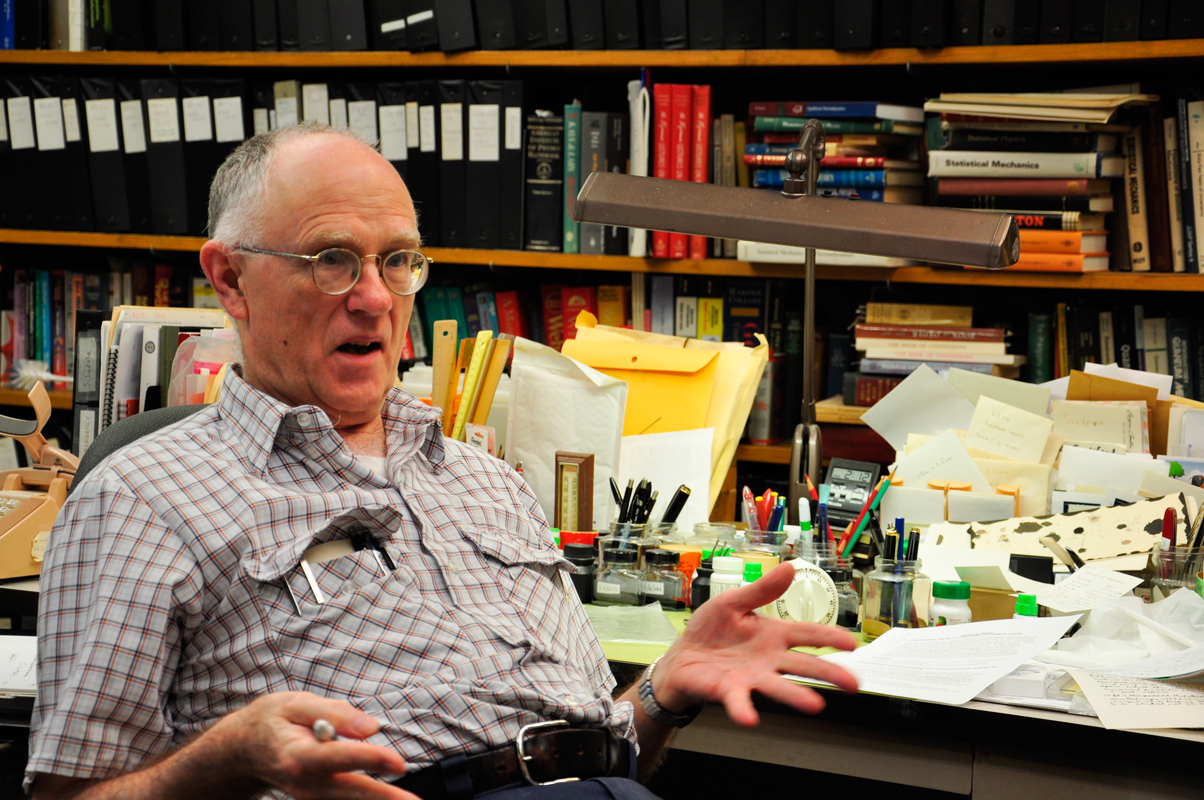 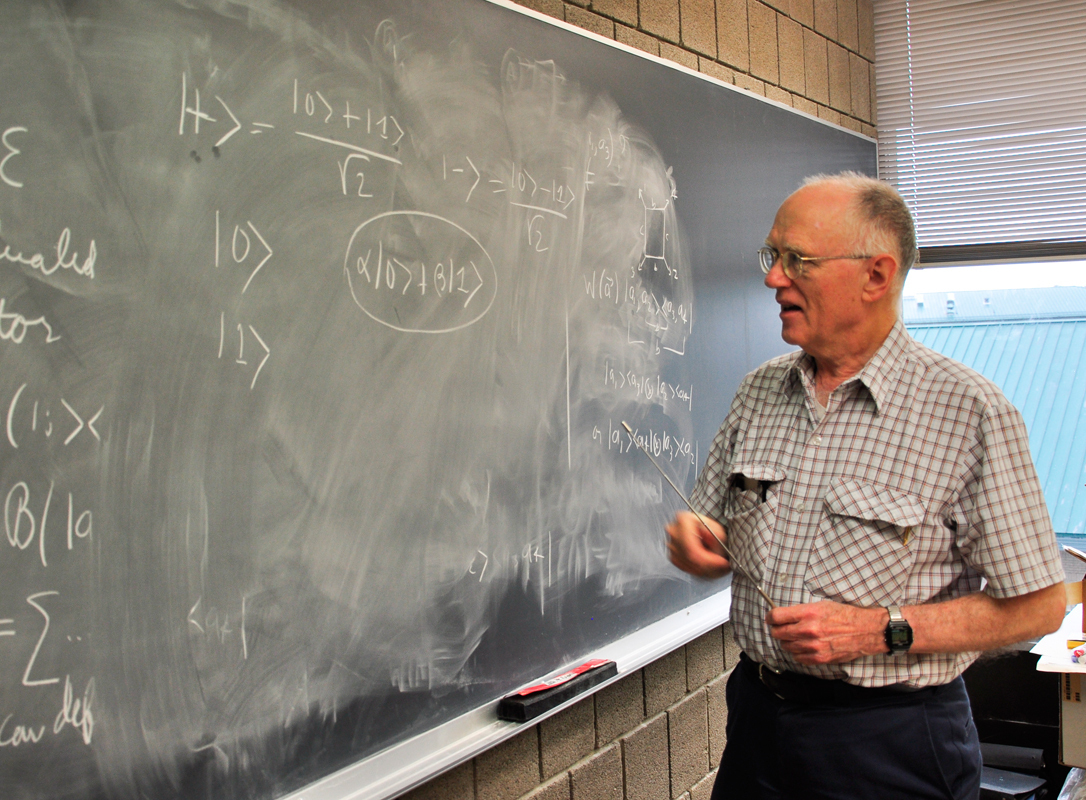 Robert Griffiths is passionate about his position as a physicist. He’s willing to explain his complicated research on quantum cryptography, which seems to always be on his mind, to anyone willing to listen. As he sat in his cluttered office, he even joked about what would happen if Edward Snowden were to be within a quantum cryptographic scheme.

Griffiths, the Otto Stern University Professor of Physics, established the Quantum Theory Group at Carnegie Mellon in 1984. Griffiths still heads the group with two members: Vikesh Siddhu and Dan Stahlke, both Ph.D. candidates in physics. The group’s research focuses on the foundations of quantum theory, as well as its potential applications, including quantum computing and information.

The bits that today’s computers use to transmit and store information can only hold one of two values — often explained with the numerals 0 and 1 — and exist in one distinct physical state. Qubits, on the other hand, are represented by the spins of elementary particles, which can exist in multiple states simultaneously until measured.

This property, known as superposition, allows a quantum computer with n qubits to perform 2n calculations at the same time, while a classical computer with the same amount of bits can perform only n. A second property of qubits, known as entanglement, allows them to be very strongly correlated at extremely large distances.

More specifically, qubits take on distinct “spins.” Two entangled qubits have opposite spins to one another and can remain in unison even if they are at opposite ends of the universe. Entanglement allows for faster transportation of information using qubits rather than classical bits.

If a quantum computer were developed based on these properties, however, it would not bring much improvement to ordinary computer tasks involving simple calculations. So, where exactly does the magic of quantum computers lie? It begins where the scope of today’s computers ends. The potential of quantum computing was realized with the development of Shor’s algorithm for the prime factorization of long numbers.

Though today’s computer cannot perform such factorization, quantum computers could implement Shor’s algorithm and solve problems which would otherwise take today’s most powerful supercomputers hundreds of millions of years to solve. The Quantum Theory Group contributed a major simplification in the final step of the algorithm in a proposal by Griffiths and Ph.D. student Chi-Sheng Niu in 1996.

“Classical information in general we know everything about. The question is, what is the corresponding quantum counterpart? You would think it would be something measured in qubits, but nobody really knows,” Griffiths explained.

The group’s research expands on the understanding of what ‘quantum information’ really is and how it would function, and investigates the scope of the computational methods that can be developed by harnessing the properties of quantum particles.

The group has been working toward understanding the flow of information through quantum circuits, and studying some of the limits to copying quantum information.
A second obstacle to developing physical quantum computers is that there are not yet methods to harness the different manipulations of quantum particles — such as superposition and entanglement — long enough to create viable technology utilizing them.

The difficulty stems from a property known as decoherence. If one tries to directly measure the value of a qubit, it will cease to exist in superposition, and assume one value just like a classical bit. This would render a system of qubits no better than a classical one. A potential solution is to use the strong correlation between entangled qubits to gather information about pairs of qubits, but entanglement is also difficult to maintain as the number of qubits increases.

The group has been researching how entanglement can lead to nearly instant transmission of information in order to better understand decoherence in information-theoretic terms and strengthen the potential applications of quantum computing.

“All the cryptographic systems that are employed to send simple things like e-mails or to authorize complex things like transfer of money through banks depend on the fact that classical computers cannot factorize primes efficiently,” Siddhu said. “A quantum computer would essentially be able to break these codes … So what to do if quantum computers can break the major classical cryptographic scheme? The idea is to come up with systems that are quantum secure, which is where quantum cryptography comes in.”

Rather than depending on the difficulty of factorizing primes, quantum cryptography depends on the unusual behavior of quantum particles. The sender sends a randomly generated sequence of qubits to the receiver across a quantum channel. After going through the process of recording the sent and received results, the two compare notes via conventional methods to ensure that the receiver received the correct information. An eavesdropper trying to intercept the quantum channel and extract information would be detected because their attempt would cause an unusual amount of discrepancy between the original and received messages, which would serve as a warning signal to the sender and receiver.

In this regard, quantum cryptography is more secure. Today’s cryptographic methods could be intercepted by an eavesdropper with neither sender nor receiver noticing.
The group has been working to further the security of quantum cryptographic schemes, and has made headway into efficiently detecting eavesdropping within a scheme. But amidst all the emerging developments, There is a question that arose: What is the true driving force behind developing this new system of computation?

“As with most theoretical physics, the driving force is a quest for understanding” Stahlke explained. “We have a fundamentally new type of information: quantum information. In the coming decades we may be able to exploit this new tool to build a quantum computer, but for now we study this to learn about the nature of quantum mechanics and about the nature of information. And since the universe we live in is quantum mechanical, it makes sense that we should try and gain an understanding of the quantum version of information.”