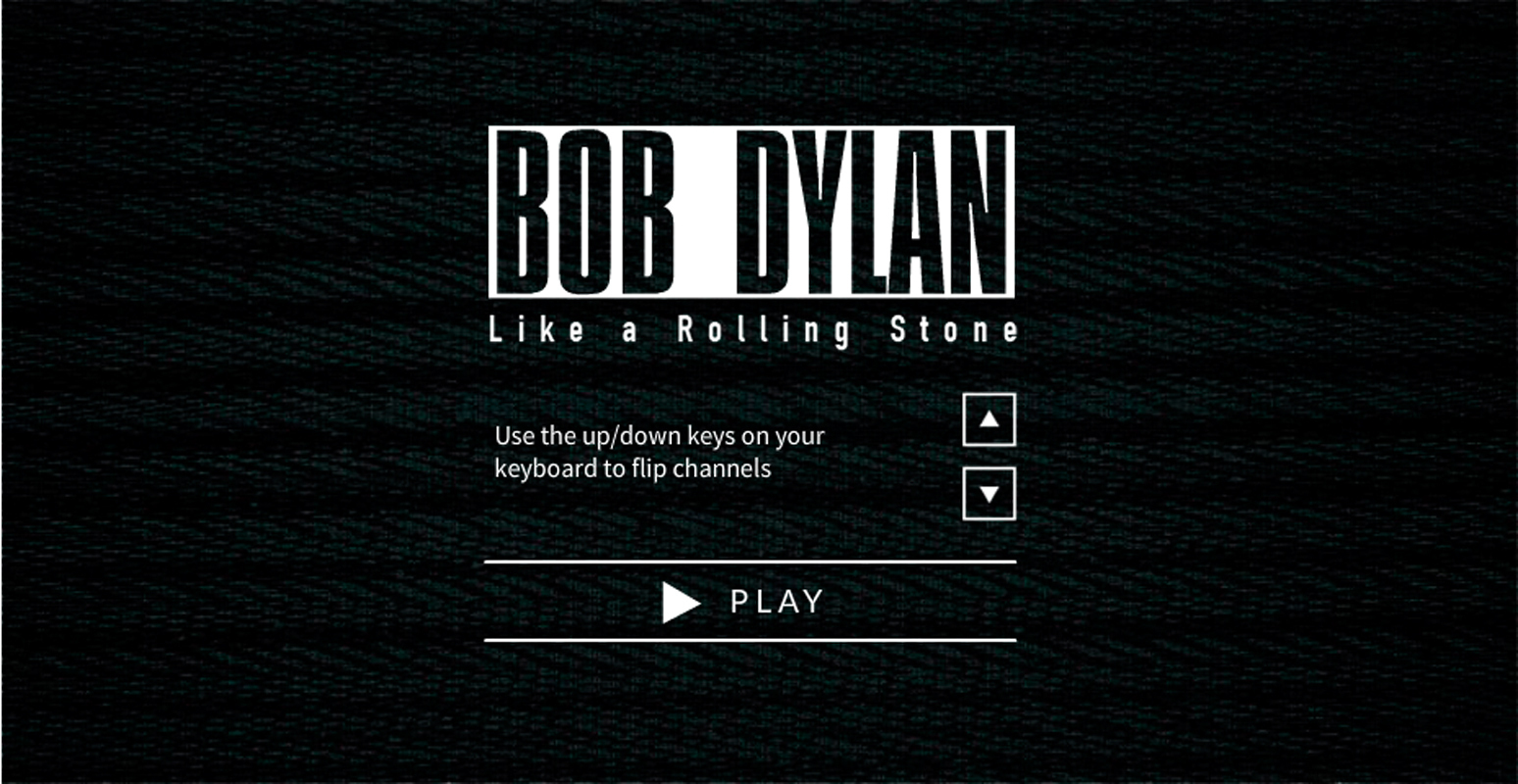 The opening frame of Heymann's video invites viewers to use the interactive channel-flipping feature. (credit: Screenshot courtesy of _video.bobdylan.com_) 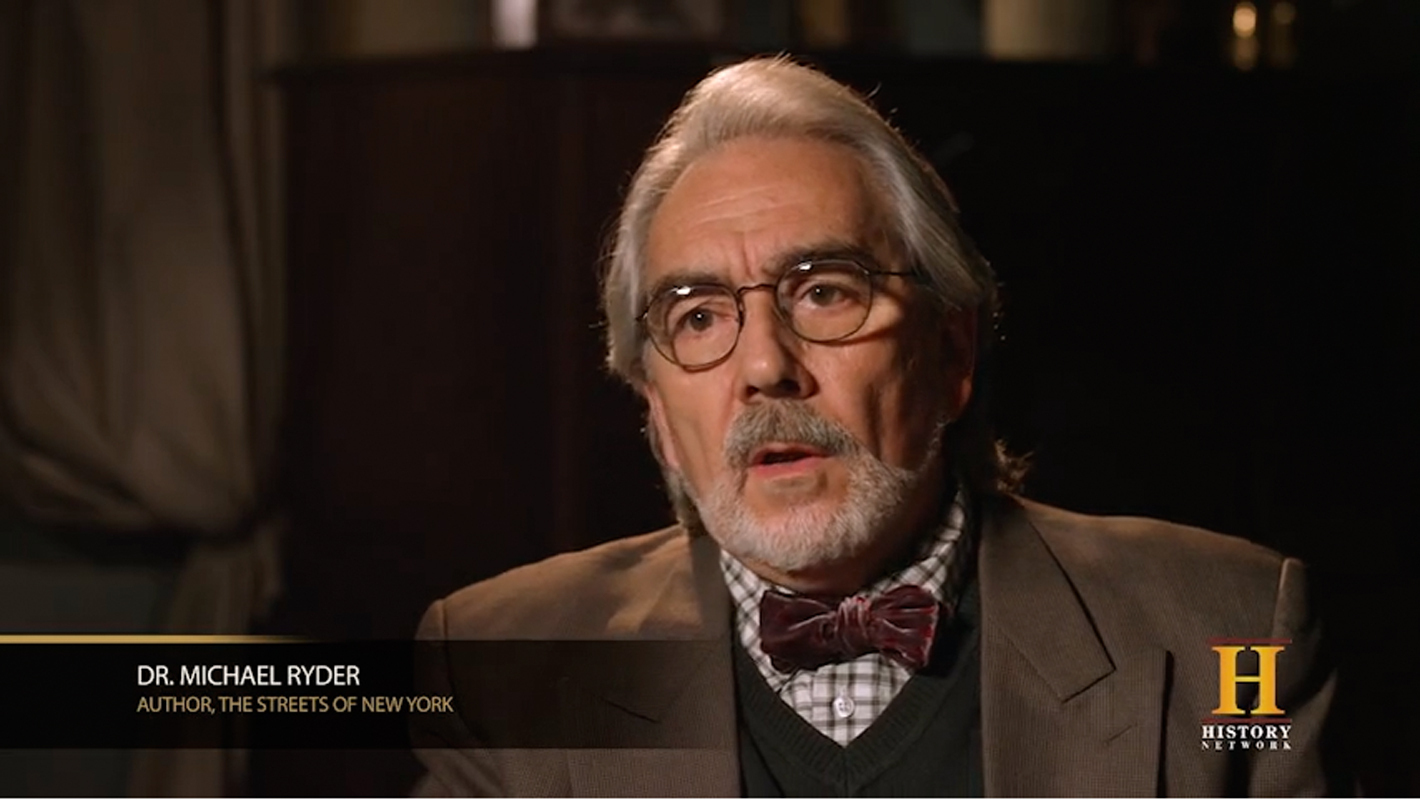 The actors in the music video adaptation of Bob Dylan's "Like a Rolling Stone" range from guest experts on the History Channel to contributors on MTV's _Girl Code_. (credit: Screenshot courtesy of _video.bobdylan.com_)

Released on his website last Tuesday, Bob Dylan’s “Like a Rolling Stone” finally has an official music video, and there’s a good chance that it’s like nothing you’ve ever seen. Instead of being one video, there are 16 independent videos that viewers can actively navigate, each featuring Dylan’s song as the soundtrack. The video is meant to simulate the experience of channel surfing, with each video a recreation of standard cable fare with actors lip-syncing the lyrics while acting as one would expect given their respective roles. A news anchor sits at a desk surrounded by computer screens and Price is Right contestants spin the big wheel with sparkling numbers. Women from a Bachelor-like show claw at each other’s hair and the hosts of History Channel’s Pawn Stars inspect an old guitar and appear to haggle over dollar amounts.

The only thing that appears out of place among these incredibly authentic recreations is that everyone appears to be lip-syncing to “Like a Rolling Stone” without realizing they’re singing a song. According to a Rolling Stone article, to rehearse scenes, actors would speak authentic dialogue and then the Dylan lyrics would be substituted in at the last minute. For example, the woman hosting a mockup cooking show rehearsed by actually explaining the recipe she is preparing and then replaced the recipe with lyrics once she had mastered how she would explain the recipe. This kind of commitment is evident across every channel and the effect is incredibly surreal, especially when placed in particular contexts such as a reporter covering a resurgence in the Occupy protests and a mockup of the Home Shopping Network. The transition from channel to channel is incredibly seamless, with the actors’ mouths always picking up exactly where the last channel left off in the song.

Directed by 27-year-old Vania Heymann, the music video is both a technological and artistic achievement. The available channels are carefully selected as subjects to be indicted by the song’s contempt. Flipping through, one begins to garner a sense that nearly everything that makes up and defines Western civilization is indicative of cultural regression instead of progression. Our cultural leaders — everyone from politicians to rap stars — are like actors that are reading a bad script. The music video puts these actors up on a stage and throws vegetables at them, with the channel depicting Dylan himself playing the song in 1965 the only one worthy of applause.

Bob Dylan’s “Like a Rolling Stone” — one of many of his songs jockeying for the position of his “signature tune” — was already on the cutting edge when it was originally released 48 years ago, when Dylan, the hero of the traditional folk scene of the early ’60s, used it to shatter his previous public image. The hard snap of Bobby Gregg’s drum kit combined with Mike Bloomfield’s stinging blues guitar is a killer sound, but was only made possible by breaking the ultimate commandment of folk music: playing electric instruments. Bob Dylan bridged the gap between folk and blues and thus changed American popular music for the better by breaking the rules and adapting to the new technologies available to musicians. The music video is a testament to the song’s innovative spirit, and proof that it’s still just as relevant in 2013 as it was in 1965.

Music videos have come a long way during their relatively short existence. On Aug. 1, 1981, the TV channel MTV debuted, forever changing how we interact with music. At first artists opposed this idea, believing their popularity would be based more on how good they looked in front of the camera instead of their music. As the medium matured, however, directors began to emerge that could create videos to compliment a song rather than to create entirely new experiences by themselves. Spike Jonze, Samuel Bayer, Hype Williams, Jonathan Dayton, and Valerie Faris all helped elevate the music video to become something more than a marketing tool by creating short films that truly are works of art. See videos for Nirvana, Red Hot Chili Peppers, Kanye West, Beastie Boys, and Arcade Fire as examples of their work. With his video for “Like a Rolling Stone,” Vania Heymann has pushed the music video even further and has demonstrated the near-endless possibilities for the form. Now the question is, what comes next?