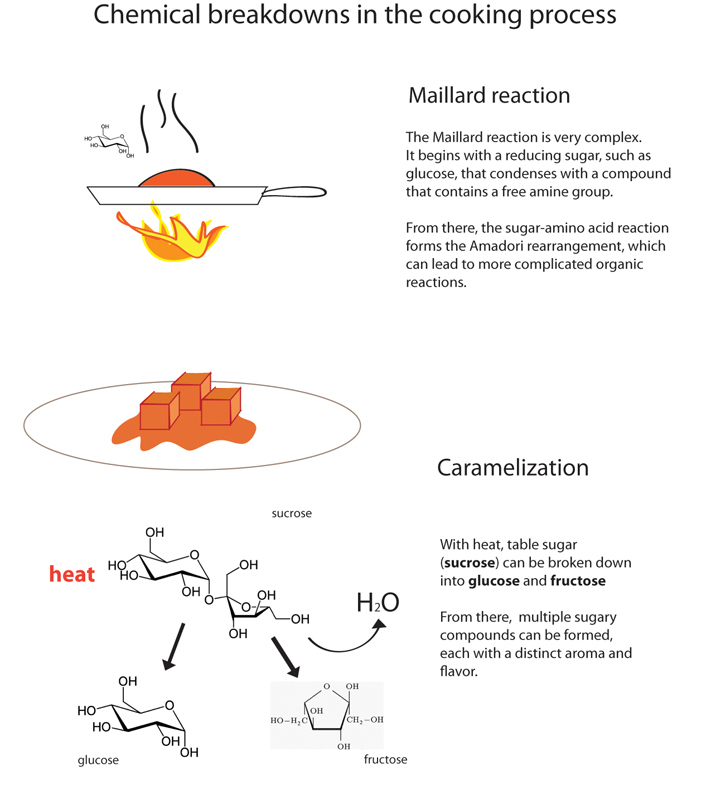 Whether it is a crispy piece of bacon or an apple pie, every piece of cooked food you eat has been transformed by a varied and complex series of chemical reactions.
When a piece of meat hits a hot pan or bread rises in the oven, a chemical reaction involving an amino acid and a sugar gives it the browned appearance that lets us know that it’s cooked. This reaction, called the Maillard reaction, doesn't just make food look cooked — it’s also responsible for the flavor and aroma of cooked food.

The Maillard reaction is named after the French chemist Louis Camille Maillard, who first discussed the essence of the reaction in his 1912 paper. The reaction wasn’t described in detail, however, until a 1953 paper was published by John Hodge, a chemist working for the U.S. Department of Agriculture. Even today, the complex reaction isn’t fully understood because of the many variables and possible outcomes.

The marriage of high heat, amino acids, and sugar is responsible for the Maillard reaction. Although it doesn't seem as if foods such as bread or meat would have sugar in them, even the most savory foods have these naturally occurring carbohydrates.

Since the Maillard reaction is so all-encompassing, the mechanisms behind it are multiplex. In the first stage of the reaction, a reducing sugar, such a glucose, condenses with a compound that contains a free amino group, and a chain of amino acids that make up a protein. From there, the sugar-amino acid reaction forms the Amadori rearrangement product, the beginning of a series of more complicated organic reactions.

The Amadori product reacts in different ways to produce different scents and flavors, mostly dependent on how acidic the system is. The Maillard reaction is notoriously complex and difficult to control; it does, after all, result in most of the flavors and scents people see and smell in cooked foods.

While the Maillard reaction affects a wide variety of foods, it is not the only browning process. Caramelization is the browning of sugar, seen commonly in roasted marshmallows, crème brûlée, and, of course, caramel.

Caramelization is a considerably simpler reaction than the Maillard reaction, since it involves just heat and sugar. Although caramelization occurs at different temperatures depending on the type of sugar, it generally happens at around 338˚F.

Caramelization is an example of pyrolysis, a decomposition of organic compounds at high heats. Caramelization, like the Maillard reaction, is a non-enzymatic browning process.

In the first step of caramelization, water evaporates from the sugar. Next, the sugar starts to break down into smaller compounds. Sucrose, for example — also known as table sugar — breaks down into glucose and fructose. From here, like in the Maillard reaction, there's a condensation process. During this step, the individual sugar compounds react with one another to form hundreds of complicated aromatic compounds. These compounds are what give caramelized foods their signature sweet and nutty taste.

Caramelization can produce a wide range of flavorful compounds. Diacetyl, for example, gives food a butterscotch-like taste. Other compounds produced by caramelization include furans, which have a nutty flavor; esters, which have a rum-like flavor; and maltol, which has a toasty flavor.

As anyone who has accidentally burned sugar knows, caramelization can easily go too far. If sugar is left to caramelize too long, the process will break down the original sugar to the point where it becomes blackened and bitter. This is a result of the oxidization of the sugar.

Sugar, a carbohydrate, is made up of rings of carbon atoms, along with hydrogen and oxygen. After sugar is oxidized so much that we consider it burnt, what’s left over is mostly carbon. Blackened, burned sugar is akin to briquettes on the grill or to chimney soot, both of which are made up of mostly burnt carbon compounds.

Although food is simple to eat, the chemical processes behind producing the flavors and aromas we know and love are actually very complex and — to this day — not completely understood. As researchers learn more about the Maillard reaction and caramelization, it can lead to new ways to manipulate how processed foods look and taste.