Boycott of Sochi games will not develop diversity 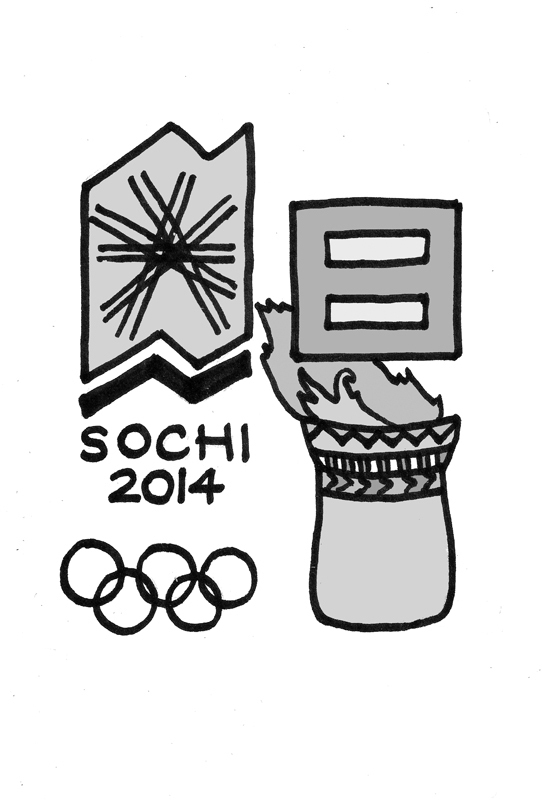 Russian President Vladimir Putin stated last Tuesday that LGBT athletes would be welcome to compete at the Sochi 2014 Winter Olympics. This announcement came after Putin passed a law in Russia that prohibits people from distributing information to minors that acknowledges same-sex relationships. Foreigners are held accountable under this law and are subject to fines, detainment, or deportation. Many U.S. citizens called to boycott the Olympics after the law passed. While Putin made a quick turnaround by stating that LGBT foreigners and athletes would not be made to feel uneasy, many people are still calling for boycotts.

The reasons behind boycotting are admirable and agreeable, but boycotts are ultimately not useful and flawed in logic. The Olympic Games, or any international sporting events, are based around cooperation and diversity. To boycott — even if it is because the host country does not champion these two ideals — would be to take away the cooperation and diversity promoted during the games. However, it is still crucial to question why Russia has the stage for one of the world’s most important sporting events. The Olympic spirit is about equality. Diversity — whether it is based on race, sexuality, or gender — should not be frowned upon, but embraced.

Picking a country like Russia makes no sense in light of the Olympic spirit. One of Russia’s most celebrated athletes, twice gold-medal pole vaulter Yelena Isinbayeva, said in August about Putin’s anti-gay law: “If we allow to promote and do all this stuff on the street, we are very afraid about our nation because we consider ourselves like normal, standard people.” She later retracted her comments, saying that her poor English was responsible for the statement, according to The Guardian.

Moreover, FIFA has given Russia the chance to host the World Cup. Just a week ago, during a match against an English soccer team, CSKA Moscow, a Russian soccer club, was penalized by the Union of European Football Associations — the European soccer governing-body — because fans hurtled racial slurs at a black player on the field, according to The New York Times. Russia has a patchy equal rights record when it comes to race and sexuality, yet boycotting the games in Russia would do nothing to promote equality or diversity in the face of this rocky record.

Russia’s citizens are actually very liberal — more liberal than the average American gives them credit for. They support abortion based on the woman’s choice and, according to The New Republic, premarital sex and single parenthood are common, very much like Western European secular cultures, even though most of the population still identifies as Russian Orthodox. Its unique religious identity is where Russia differs from the rest of Europe and where the stigma against gays originates from. Seventy-four percent of Russians believe that homosexuality is some sort of abnormality. This is another crucial reason why boycotting won’t work. It’s not the Russian government that is against homosexuality, but Russian popular opinion, as Isinbayeva demonstrated.

A boycott is an act of defiance against the government making a bad decision. The Russian people’s unique geography, culture, and history has led to an interesting mix of European and Asian beliefs, as well as individual ones. A boycott would almost be hypocritical. Gay athletes are barely given a chance to succeed — as evidenced by the very few professional athletes who have come out — in the United States and Western Europe. A boycott will not persuade the people of Russia to strive for equality, as they will only see Americans as the enemy, and unworthy of competition.

A boycott will also harm American athletes who have prepared their entire lives to ski, shoot, and jump on the largest stage possible. They have prepared for their moment of glory. To boycott would be to take away that potential glory. Boycotting will show Russians nothing, only that Americans seem unable to compete. By competing in Russia, Americans will show Russian citizens that diversity — in any form — is celebrated.