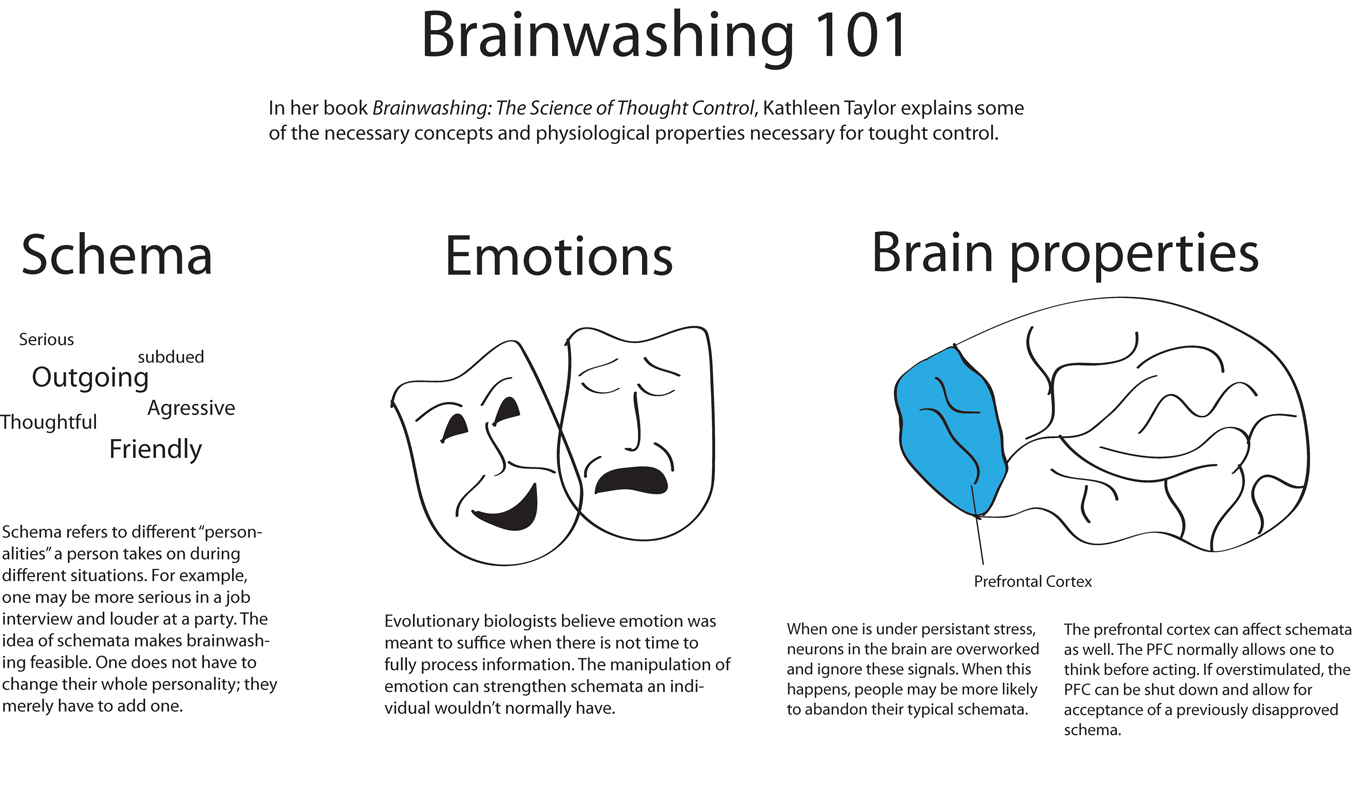 Brainwashing and thought control have had an impact on a variety of people and cultures throughout history, and can be traced all the way back to the fourth century BCE.

Brainwashing is the process of forcing people to fundamentally change their beliefs. Despite the fact that brainwashing is an age-old idea, it has taken on a new meaning in today’s society with advancements in neuroscience: Scientists are now able to — at least partially — understand brainwashing techniques and their effects.

A person’s brain is not fixed but is continually changing, sometimes in imperceptable ways. In the past, people assumed that once they mature, their brains — and thus their identities — could not dramatically change.

According to Kathleen Taylor in her book Brainwashing: The Science of Thought Control, this older theory generally did not support the idea of brainwashing, as it would require people’s identities to completely shatter in order to work. Recently, however, it has become clear that the brain constantly takes in information and alters the way it functions.

The brain, along with all the nerves in the body, is made of cells called neurons that are capable of sending signals to each other. Each of these neurons receives a multitude of signals that help develop one’s personality and perceptions of the world.

Neurons can then further send off signals in response to those they receive. Through analyzing past input and output signals, the brain can predict the immediate future and then compare its prediction with what actually occurs. In this way, the brain learns from the past and more accurately understands how to react to stimuli.

For example, the way someone acts in a job interview is generally very different from the way that person acts at home. These different personae are often called schemata, and are only activated under certain circumstances. This means that a person can have dormant schemata, and that they can create new ones. The presence of multiple schemata makes the idea of brainwashing much more plausible. In order to be brainwashed, a person only needs to have a dormant schema activated or have a new schema created, rather than have their entire persona modified.

Schemata can also refer to the brain’s recognition of certain objects. Both the input and output signals in a neuron are extremely specific, meaning that the representation of a single object in the brain is created by a group of neurons, not by any single neuron. As a person experiences an object, they develop a schema for that object. This schema includes everything related to the object, including visual appearance, sounds, related emotions, and related actions.

Now the question becomes, how is the strength of the schemata determined? The more these schemata activate, the stronger they become. This explains why people become used to things that they experience on a regular basis. In order for brainwashing to occur, the relative strength of the schemata must be altered. This is done by manipulating a person’s emotions, their brain’s aptitude for change and stress, and their prefrontal cortex.

Taylor explains that evolutionary biologists believe emotion is used for survival, and is meant to suffice when there is not time to fully process information. Because of this, emotion is generally not coupled with logical reasoning. This has the potential to lead people to strengthen schemata that they do not generally activate.

The brain’s aptitude for change and stress can also affect schemata. Neurons work best when they receive varied stimuli, and can become dormant otherwise. When a person is initially stressed, neurons recognize the change and become more alert. When stress persists, however, the neurons become overworked and ignore incoming signals. Because of this, people are more likely to abandon their preferred schemata when under stress.

Finally, the prefrontal cortex (PFC) can affect schemata. The PFC is the part of the brain that allows a person to stop and think before acting. Taylor says that the PFC shuts down when it is activated and then overstimulated with information. Once the PFC has shut down, a person is no longer able to think before acting, which can lead to the acceptance of a previously disapproved schema.
The science of brainwashing is a topic that is inextricably linked to many aspects of our society, including the integration of technology in society and advertisement, and could greatly affect the way society functions as we learn more about the way the brain operates.