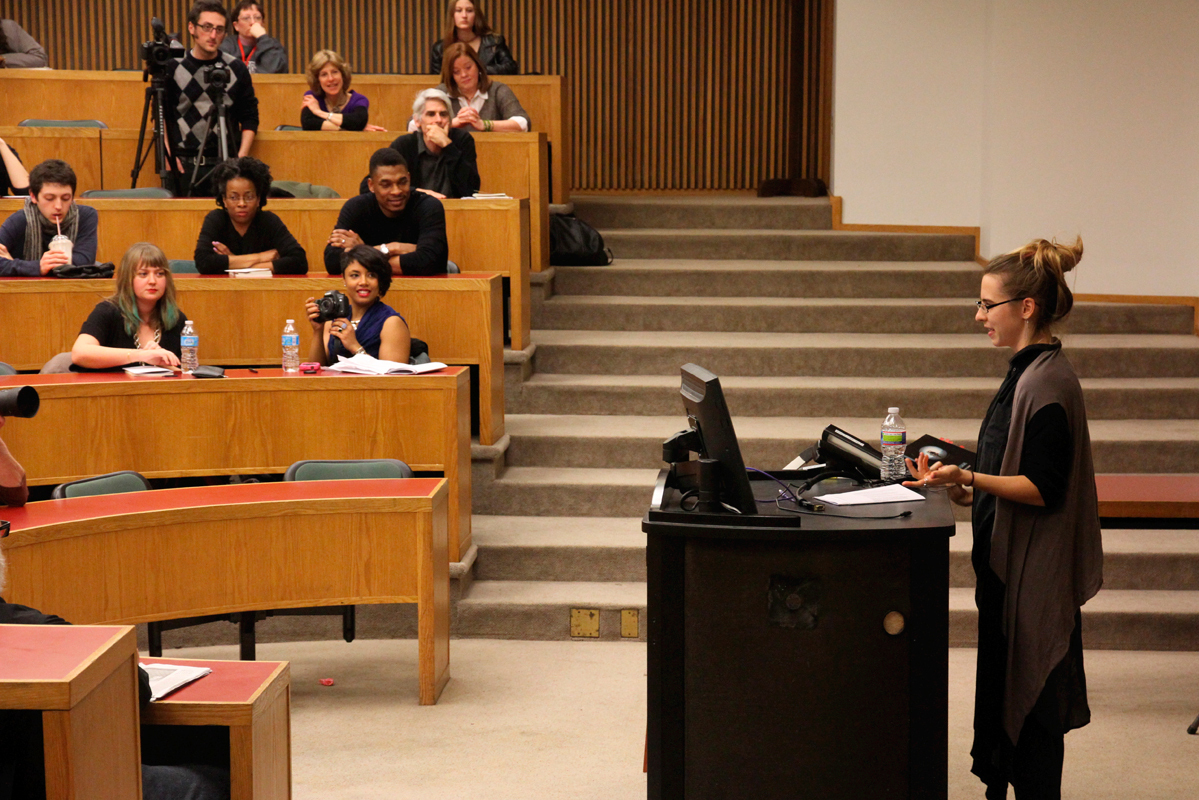 The Adamson Wing was filled almost to full capacity for the reading; students and faculty from Carnegie Mellon’s English department made up the bulk of the audience.

Rooney’s poems were decidedly dark; words like “black” and “darkness” wove a common thread throughout her poetry, capturing the essence of the traditional tortured artist. At times, it felt a little heavy for the lighthearted atmosphere of the Adamson Wing.

Rooney ended with some unpublished poetry, including a poem dedicated to Carnegie Mellon’s Greek Quad, where Rooney said she had spent a lot of time her first year at the university.

Smith continued the readings with selections from her book, I Live in a Hut, and ended with an unfinished poem dedicated to her mother, who was in attendance. Smith’s work was characterized by a dry, sarcastic wit that drew regular interjections of laughter from the audience. Her poems were generally more narrative than Rooney’s, relying less on figurative language and more on detailed descriptions of relatively normal scenes that, despite their mundane nature, captured the full spectrum of human emotion.

But like Rooney’s work, Smith’s poems were sardonic and dark; she warned before reading what she called a Valentine’s Day poem that “like many things in I Live in a Hut, it’s a little bleak.” Indeed, most of Smith’s poems deal with love lost rather than love found.

Smith’s last poem was what she called “sort of an advice poem,” directed at current Carnegie Mellon students. Titled “Situational Humor,” the poem captured the essence of Smith’s experience at Carnegie Mellon and how she felt that current students should take advantage of their experience. Smith’s down-to-earth reading style complemented the sharp wit of her poetry, making her the most successful of the three readers.

The last reader was Bertram, who began with a poem about Pittsburgh. “Strip District Eclogue” drew from Bertram’s experiences within the city.

Of the three poets, Bertram was the most abstract. Bertram’s poems were often based in generous poetic license fitted within precise form; in a couple of poems her experimental style detracted from the powerful emotion of her poetry. Bertram’s location-based poems, like “Strip District Eclogue” and her two fractals (a form of poetry she invented), had the most impact out of the poems she read; her language made it easy for the listener to imagine her in those settings.

Bertram, Smith, and Rooney finished the reading with a Q & A session, describing their creative processes, inspiration behind their poetry, and their perspectives on pursuing education past an undergraduate degree. In terms of writing poetry, Bertram said, “It’s like trying to call a cat; it doesn’t really come when you want it to.”

It’s clear that all three artists keep strong ties to Carnegie Mellon: Although a good portion of the reading carried a serious, thought-provoking tone, the many poems dedicated to the university and to Pittsburgh made the reading an enjoyable celebration of Carnegie Mellon alumnae.