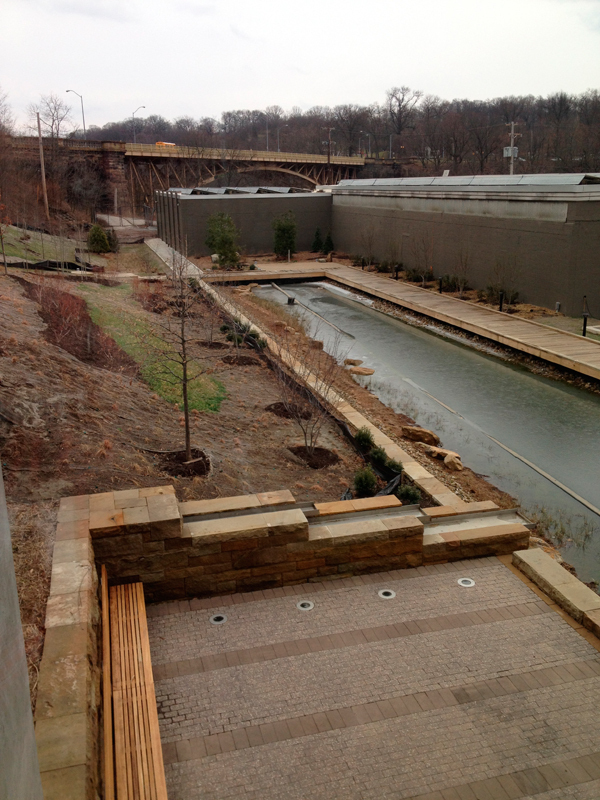 The Center for Sustainable Landscapes’ rainwater run-off is stored in this lagoon, which uses the roots of reeds to filter the water. (credit: Laura Scherb/Assistant Pillbox Editor)

I’ve said it once, I’ve said it a million times: I want to live in Phipps Conservatory. Is there anything that the botanical gardens can’t accomplish? The answer seems to be a resounding no, especially with the recent addition of their new green building: the Center for Sustainable Landscapes (CSL).

Officially open as of Tuesday, the CSL — the center’s fashionable acronym — is a crucial, innovative step in the nationwide craze for sustainability.

The building — which was designed by a conglomeration of Pennsylvanian designers, engineers, architects, and contractors — is the winner of two international awards for sustainable buildings: the Leadership in Environmental and Energy Design (LEED) Platinum and the Sustainable Sites Initiative certifications.

According to the information that is presented throughout the building, the LEED Platinum certification is the highest level of recognition for environmentally friendly buildings.

According to CSL docent Sibylle Ingold, the Sustainable Sites Initiative award was given to recognize that the CSL is a zero-water, zero-energy facility. As the friendly docents who guide the daily
1 p.m. tours will explain, that means that the building has a net usage of zero gallons of water and zero watts of electricity.
The facility produces water through a rainwater collection system that stores and filters water through the use of lagoons, constructed wetlands, and permeable parking pavement. Electricity is produced and conserved with photovoltaic panels (solar panels), a vertical wind turbine, and a direct digital control building management system.

The results of these efforts are 200 gallons of water and 125 kilowatts of electricity produced each day — quite an impressive amount for such a small facility. If the CSL is able to uphold these standards for a year and collect the data necessary to back those qualifications, it will qualify for the international Living Building Challenge, one of the most honorable and competitive awards that can be bestowed upon a green building.

While the $23 million project is breathtaking on paper, the realized vision is unfortunately underwhelming. While visitors can easily see the lagoons and solar panels, it’s hard to truly appreciate the vast strides that the facility has made in sustainable building and landscape: The dull concrete building is unfinished, not very visually engaging, and lacking in visitor resources, save for a docent and interactive computer. The result doesn’t do justice to the amazing environmental efforts of the Conservatory.

That being said, I have high hopes for this incredible project. Phipps as a whole consistently presents exhaustively-researched, well-organized, well-funded, and creatively presented efforts. This project in particular has the added importance of being a building that has attained three international awards.

Phipps isn’t going to drop the ball; it’s just possible they tossed it into the public court a little too early.