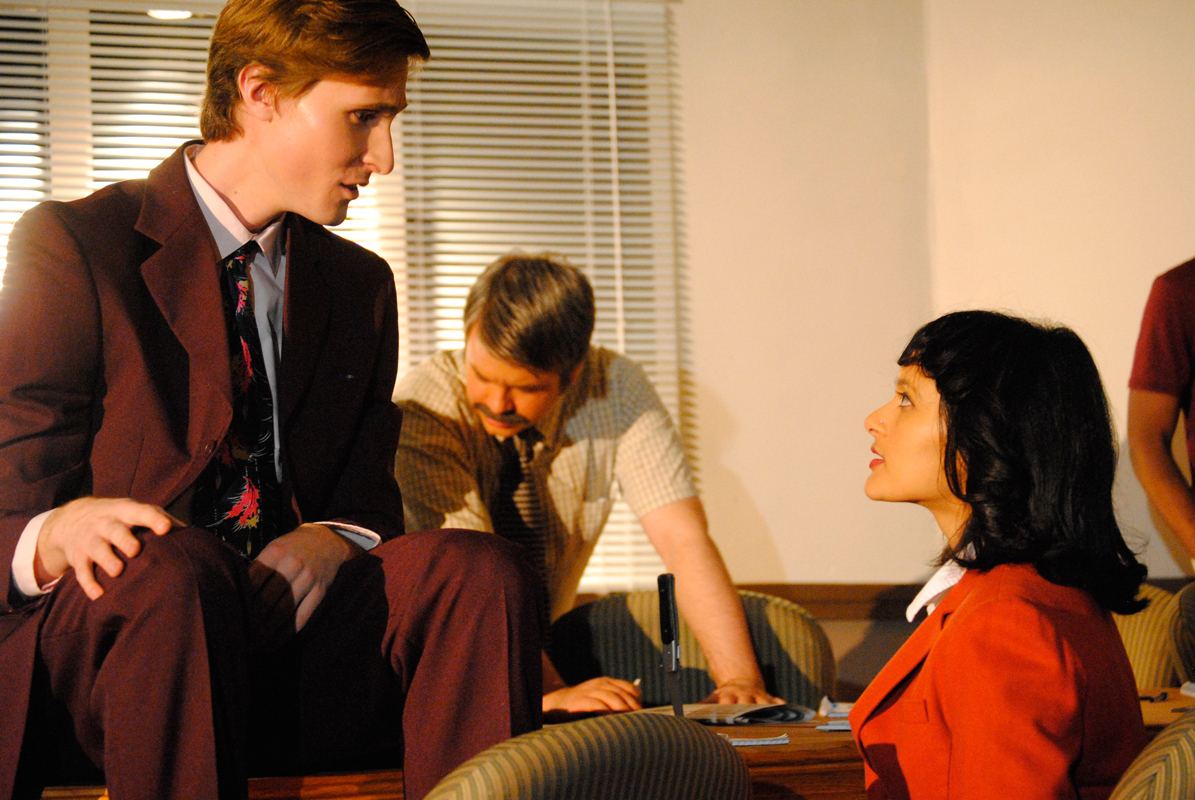 Scotch’n’Soda Theater put on a production last Friday and Saturday of 12 Angry Men, a drama concerning 12 jurors who are tasked with determining the guilt or innocence of a boy charged with homicide.

Despite the title, the cast of jurors included women as well as men. Compared to traditional productions, this production featured a much more diverse cast, which played to its benefit; the cast resonated much more with a modern-day American audience, touching upon themes related to race and gender.

The staging was relatively understated, with much of the attention going toward the people in the jury room. However, it was extraordinary to note that the set featured running water and electricity, showing the great deal of effort that was put into every aspect of the production.

Although the play was generally enjoyable, the implementation of the ’50s-era dialogue was less than seamless. The actors’ rendition of the slang expressions sounded somewhat awkward and forced at times, but it became less of an issue as the play went on.
The play itself was remarkably tightly woven and dramatic; every detail was intrinsically important or revealing. Throughout the piece, there was a very real sense of frustration and tension between each of the jurors, which fluctuated between the scenes of the play. Audience members were intently sitting upright in their seats as they watched the play, which spoke to its tense atmosphere.

Keeping true to the title, the focus of the production was the jurors themselves. The cast portraying the jurors was very talented; each actor gave a unique and memorable performance. Of special mention is junior Bachelor of Computer Science and Arts student Andrew Bueno, who played Juror 8, the dissenting juror who was the first person to vote “not guilty.” Bueno gave an outstanding performance as the calm and controlled yet passionate objector who manages to sway the opinions of his fellow jurors.

Opposing Bueno’s character was Juror 3, played by senior decision science major Kevin Handerhan, who gave a solid performance as a vociferous older man fostering bitterness toward his son. Senior economics major Erika Tang was also very noteworthy in her portrayal of Juror 9, an observant old woman who seems to go off on miscellaneous tangents, but whose words carry a deeper significance. Lastly, master’s student in design Shree Lakshmi Rao’s portrayal of Juror 11, an immigrant with strong moral principles, was also very moving.

In addition to the strong performances, the play featured several striking and memorable scenes. In one scene, Jurors 3 and 8 attempt to reenact the scene of the murder, with Juror 3 pointing a switchblade down at Juror 8’s chest. This scene comes after an exchange between two other jurors, in which it is stated that anyone has the potential to commit murder. The other jurors’ collective jump as Juror 3 motions to “stab” Juror 8 startled the audience, making the subsequent short bit of comedic relief all the more hilarious.

In another scene, the jurors decided one by one to turn their backs to Juror 10, played by senior decision science major Christopher Sparks. Juror 10 is a garage owner who is highly intolerant of people who live in the slums. The jurors’ actions were in response to Juror 10’s rant on the untrustworthiness of poor people. In the end, with no one listening to him, 10 backed into a corner and remained silent for the rest of the play. This scene spoke greatly to the power of the simplest of human gestures in making a difference.

The play raised very important questions regarding the American judicial system and the meaning of “reasonable doubt.” It made one wonder what would have happened in the same case without a conscientious objector; as the play pointed out, “People make mistakes all the time.” Those mistakes have led to innocent people being sentenced to death.

12 Angry Men was more than just a commentary on the American judicial system. The play was also an examination of human nature: our hypocrisies and prejudices, as well as our better angels of responsibility and morality. It looked at what makes us tick, and how the smallest things can affect our decisions.

Scotch’n’Soda’s production of 12 Angry Men was truly a unique experience. Its greatest strength lay in the simple, undiluted power of its personalities, which created a strong emotional connection between the characters and the audience. As director and junior voice major James Alexander states in the playbill, “You don’t need flashy special effects or musical numbers to hold an audience’s attention, because a powerful script with a talented cast can be just as compelling.”