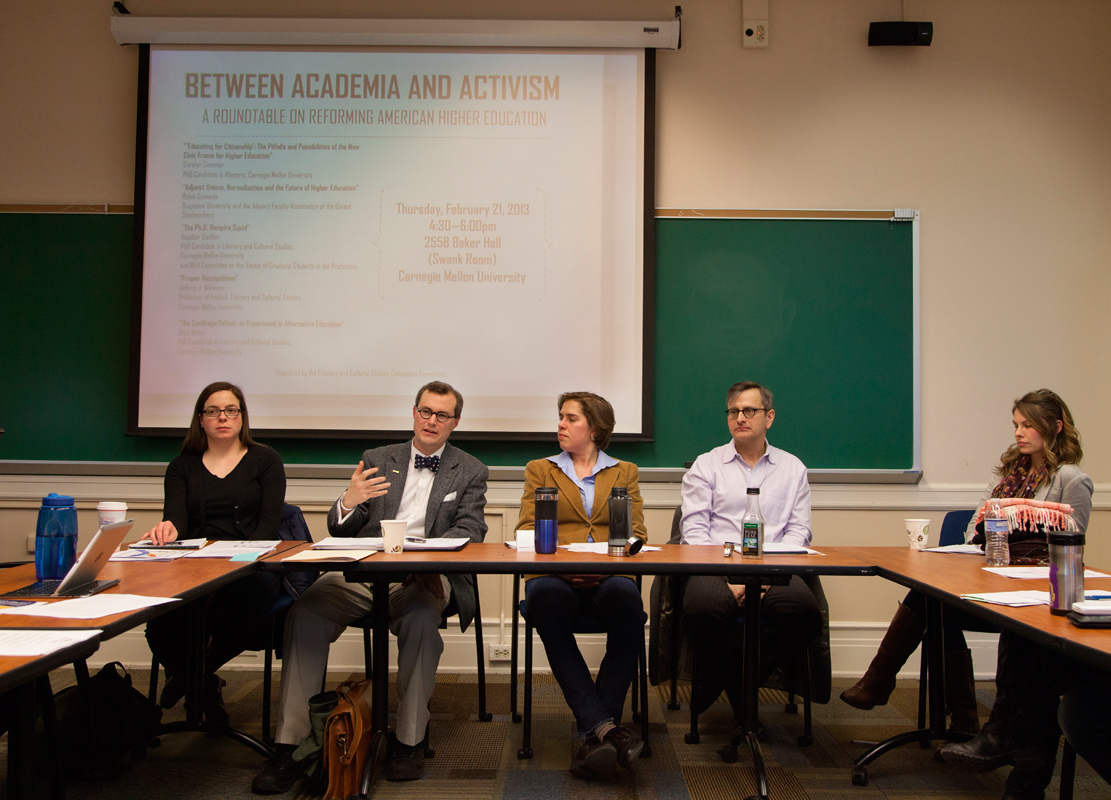 The nature of higher education, as well as potential strategies to improve and facilitate learning at the university level, were key topics of discussion at the lecture “Between Academia and Activism: a Roundtable on Reforming American Higher Education.”

The event, hosted last Thursday in Baker Hall’s Swank Room (255B), started with presentations from a five-member panel and ended with a round-table discussion on the state of higher education in America.

The Swank Room was crowded for this event, and the small classroom’s round-table format suited the discussion-based nature of the panel.

The first speaker was Carolyn Commer, a Ph.D. candidate in rhetoric. Commer’s talk, titled “Educating for Citizenship: the Possibilities and Pitfalls of the Civic Frame for Higher Education,” focused on the role of citizens and the public sphere in higher education reform.

Robin Sowards, a faculty member at Duquesne University, titled his talk “Adjunct Unions Normalization and the Future of Higher Education;” he listed 15 major problems that he sees in higher education and proposed a plan for systemic change. Sowards’ list of problems with higher education ranged from climbing student debt levels to the treatment of underpaid adjunct faculty.

“All of these problems are interconnected, in the sense that they’re all causally related,” Sowards said.

“And it also forms a cycle. At any point you enter it, you can always cycle back to some other point — there’s no point at which it terminates. Now, that cyclical property is bad; since things are causally related, once a single problem is exacerbated it further exacerbates all the other problems,” he said.

Heather Steffen, a Ph.D. candidate in literary and cultural studies, called her presentation “The Ph.D. Vampire Squid,” a play on an essay over 100 years old by Harvard philosopher William James, “The Ph.D. Octopus.”

James’ essay discussed the problems with the Ph.D. programs in American colleges in 1903, when the essay was published.

Steffen, similarly, talked about the problems with modern Ph.D. programs, recommending changes like stipends for graduate students closer to the current living wage.

Steffen is also a member of the Modern Language Association’s (MLA) Committee on the Status of Graduate Students in the Profession.

The committee, according to the MLA website, “will consider a range of curricular, intellectual, and professional issues that affect graduate students in language and literature.”

“With average doctoral time to degree at nine-and-a-half years, and a labor system in which 75 percent of college teachers will never be eligible for tenure, and a tenure-track job market whose bottom dropped out in the ’70s, and the ’80s, and the ’90s, and in 2008, humanities graduate education seems to be, as [MLA President] Michael F. Bérubé puts it, a ‘seamless garment of crisis,’ ” Steffen said.

According to Williams, the inflated tuition at most universities is caused by widespread privatization, and universities’ refusal to spend their endowments.

The last panelist to speak was Jess Wilton, a Ph.D. candidate in literary and cultural studies.

Wilton’s title references the Saxifrage School, described on its website as a “higher education laboratory working to lower costs, rethink the campus, and reconcile disciplines.”

The Saxifrage School, Wilton said, follows a model of “disruptive innovation,” a term coined by Harvard economist Clayton Christensen. Although Christensen applied the term to big business, Wilton wants to apply it to higher education, as modeled by the Saxifrage School.

After the panelists had finished their presentations, the audience, comprised mostly of graduate students in the English department, put forward their own questions and opinions.

Sheila Liming, a Ph.D. candidate in literary and cultural studies in attendance at the panel, said that the discussion “represents the idea that problems with universities are systemic in a large way, and the answers are going to be systemic in a large way too. Solutions are going to be systemic, meaning that you can’t fix any one level. You can’t just fix undergraduate education; you can’t just target the graduate level or even labor issues, you have to look at the whole picture.”

David Haeselin, another Ph.D. candidate in literary and cultural studies, was glad that the panelists addressed the issue of labor in the university setting.

“I’m glad to see that labor was first and foremost; everyone was addressing it in some way or another…. It was great to get a community conversation in an interdisciplinary setting.”