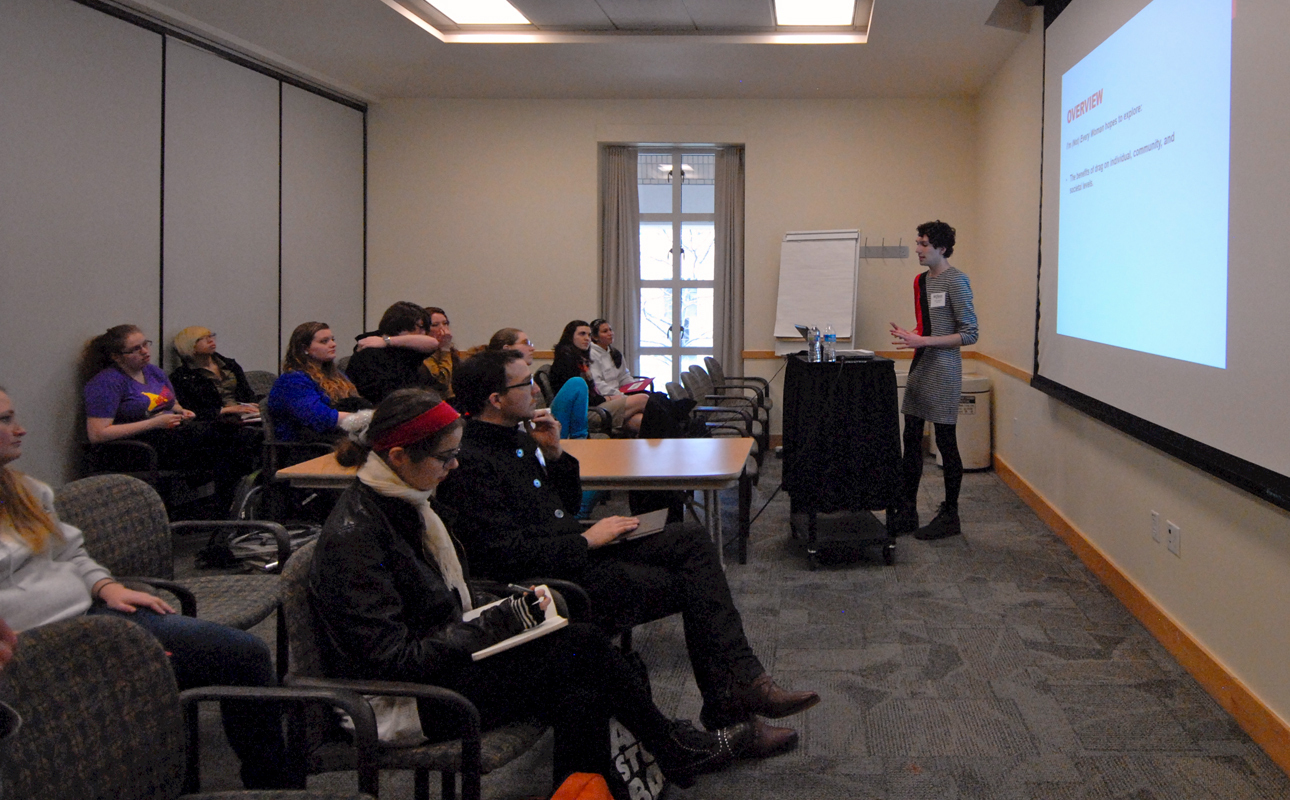 With the Carnegie Mellon Town Hall meeting on sexual assault earlier this month and the recent Senate approval of an extension of the Violence Against Women Act, gender politics are at the forefront of society’s collective thoughts at the moment. This is certainly true for Carnegie Mellon students and members of the Pittsburgh community, who participated in yesterday’s MOSAIC Gender Conference: The Naked Truth.

MOSAIC is an annual gender conference that offers “provocative sessions aimed at exploring gender construction in unconventional ways,” according to the event’s website. This year’s sessions were led by Carnegie Mellon faculty, staff, and students. They covered a range of topics — from looking at Roe v. Wade 40 years later, to exploring the history of gay and lesbian social clubs in Pittsburgh in the 1960s, to analyzing the social construct of “man.”

The MOSAIC Gender Conference got off to an early start on Saturday evening with a performance of “A Memory, A Monologue, A Rant, and A Prayer: Writings to End Violence Against Women and Girls.” This collection of writings features monologues by well-known authors and playwrights and was edited by Eve Ensler (who also wrote the play The Vagina Monologues) and Mollie Doyle. On Saturday, five students presented monologues to a small audience, allowing for an intimate and meaningful evening. The audience was encouraged to give donations that benefitted the Women’s Center and Shelter of Greater Pittsburgh, a local shelter for victims of domestic violence.

Danielle Devine, a MOSAIC committee member and senior biology major, commented on the decision to bring Evans for this year’s keynote address: “We chose her because of the content, which I think was really good. It’s a college campus and we thought that would get a lot of people’s attention.”

Evans’ talk drew a fairly large crowd. Though it primarily dealt with male-female relationships and did not raise any issues that weren’t already prevalent on college campuses, it provided a pathway for open discussion on a campus where these topics are often overlooked. As Devine put it, “Even though the hookup culture isn’t super overwhelming at Carnegie Mellon, it’s still here.”
The breakout sessions throughout the day made up for the heteronormative focus of the keynote presentation, as they included topics like “From Daddy’s Debutante to Public Enemy Number One: What it Means to a be Black Transman” and “I’m (Not) Every Woman: Notes Toward a Queer, Feminist Critique of Drag.” The former talk was led by Michael David Battle, founder and director of Garden Peace Project and the director of prevention services at Pittsburgh AIDS Task Force. This discussion provided a look at Battle’s own transition from female to male and invited participants to explore their own privileges and biases. The latter presentation, led by local intermedia artist Dani Lamorte, presented a critique of femme drag and questioned prevailing ideas of drag as subversive.

Other sessions during the conference included “The House of Tilden: Gay and Lesbian Social Clubs of Pittsburgh (1960–1988),” a fascinating session led by Harrison Apple (a senior Bachelors of Humanities and Arts student in global studies and art) that provided an oral history of Lucky, a prominent figure in the emerging gay subculture of 1960s Pittsburgh. “The Social Construct of Man” session was led by Aaron George, Housefellow for the Intersection, and addressed issues of how men learn what is masculine and what happens when those ideals are questioned. Closing his session, George encouraged students to pay attention and be more aware of what is influencing them. As a way of overcoming social stereotypes, he told students to “call it out when you see it.”

MOSAIC concluded with a session led by Kate Hamilton and Kurt Sampsel, doctoral candidates in the English department, who discussed the importance of appearance and representation in gender relations, particularly in the media. Showing clips from Miss Representation and John Berger’s 1972 BBC series Ways of Seeing, the thought-provoking session allowed participants to engage contemporary media trends in an informed critique and was a fitting way to end the day.

The conference as a whole included sessions for a range of knowledge levels, with some sessions drawing on well-known theorists and others dealing mostly with individual perception. With growing attendance and a strong, open community present, this year’s MOSAIC gender conference proved to be quite successful at engaging students in conversations about gender, sex, and sexuality that they otherwise might not have had.