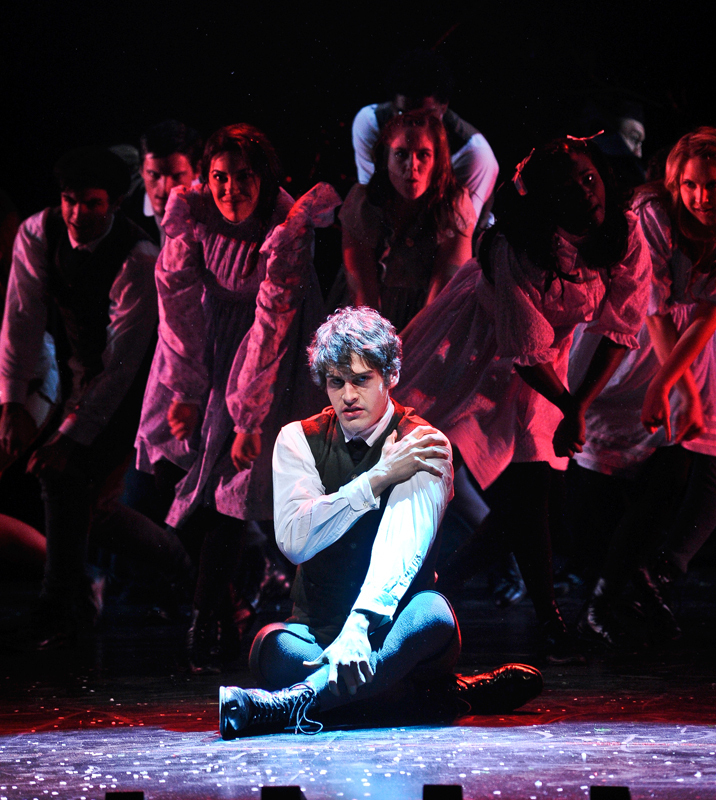 Spring Awakening details the sexual blossoming of young teenagers in a repressive German community in the late 1800s. The musical, written by Steven Sater with music from Duncan Sheik, was based on a German play of the same name. Frank Wedekind originally wrote the play in 1891 in protest of the rigid social standards of the day.

The sets in the show were beautifully designed: Both the moving riverbank and the lights that stretched down from the ceiling created an ethereal feel to the stage. However, one of the more confusing aspects of the show was tied to these beautiful sets: Moritz’s repeated interaction with them. None of the other characters acknowledged the movement of the brook or the lights that stretched down from the ceiling. But at one point, Moritz backed away rapidly from the brook as if he could see it as it moved toward him, and at another, he deliberately swung the hanging lights.

The costuming choices for the show were interesting but more effective in some scenes than in others. Dressing grown women in little-girl frocks for most of the play was an excellent way to demonstrate the dichotomy between who the girls were becoming physically and who their parents and teachers said they must be. However, keeping them in those same short frocks for “The Song of Purple Summer,” the final song of the show, was confusing. Admittedly, the boys were running around in their underwear at that point, but the use of children’s dresses weakened the idea of growth in the finale. Were the girls still trapped in the infantile presentation that had governed their lives?

While on the subject of pants, having the bohemian runaway Ilse traipsing around the stage without them for most of the second act was a bit much. Her costume — thigh-high stockings, a man’s shirt, and a trailing scarf — was meant to convey her free-spiritedness to the audience, but it ended up being a little heavy-handed.

Like any play, this performance had its strengths and its weaknesses. This play was at its best when most of the cast was on stage. Individual performances could not match the frantic outpouring of energy displayed in “The Bitch of Living,” “My Junk,” and “Totally Fucked.” The voices of the cast blended well and created an absolutely phenomenal vitality on stage. While many of the individual vocalists were clearly talented, their voices sometimes failed to project over the instruments in the pit.

Despite this, many of the performers proved themselves excellent actors. The first act was definitely the weaker of the two in terms of performance, but the actors gained confidence in the second.

Both Koch and Helmboldt portrayed the dichotomy of children-turned-adults very well. This tension of confused adolescence is a major theme throughout the play, and the stars of the show communicated it admirably. They both demonstrated the growing sexual attraction between their characters well. Koch, in particular, succeeded in conveying both Wendla’s growing desires and her inability to understand them.

Two other talented cast members were senior acting major Katya Stepanov and senior acting and musical theatre double major Nick Rehberger. Together, they played all of the adults in the show. The adult characters in the show are written to appear as a uniform mass, but Stepanov and Rehberger managed to highlight the individual traits of each character. Stepanov’s contrasting portrayals of Wendla and Melchior’s mothers were both successful. Rehberger’s characters were more similar to each other — that’s just how the men are written in this show — but he infused each character with unique energy. His most frightening performance was that of the abusive father figure in “The Dark I Know Well.”

The show as a whole highlighted the idea of individual experience very well. Much of the choreography involved the actors running their hands over their own bodies, which emphasized both their feelings of isolation and their incredible yearning for touch from others.

Among the highlights of this show were the subtle directing choices that emphasized Spring Awakening’s central themes. One such choice appeared in the song “My Junk,” which describes the obsessive nature of teenage crushes. The cast clustered stage right, with all of the actors facing out into the audience. The girls giggled and waved as if looking directly at the boys, while the boys, positioned behind them, mugged and preened as if they were looking directly at the girls. This clever bit of directing highlighted the idea that teenage crushes are just as much about the admirer as they are about the object of admiration.

Overall, perhaps Spring Awakening was not the School of Drama’s best performance, but the actors were extremely talented and the presentation well thought-out. It was definitely time well spent.