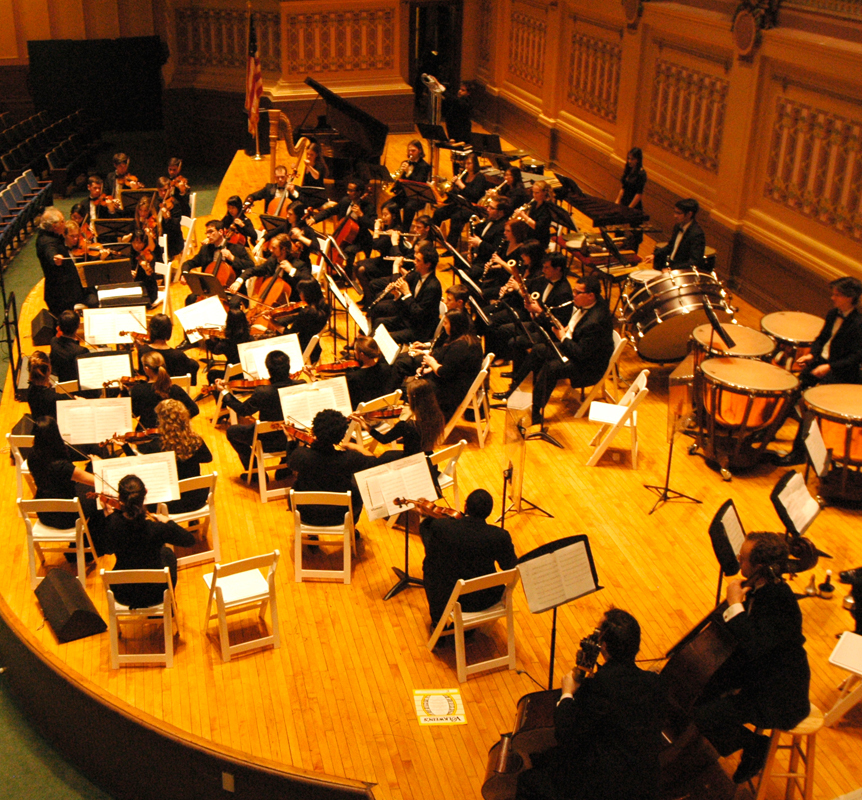 “I want it to smack you in the face,” said senior music composition major Adam Shield, speaking of his modernism-inspired music. “I want to force you to remember it.”

Shield was one of four student composers who saw their original works performed by the Carnegie Mellon Philharmonic on Friday night at Soldiers & Sailors Memorial Hall & Museum — and his piece, while smack-worthy, was not the only memorable one on the program. All four composers presented remarkably complex and professional works, performed in all their discordant glory by the School of Music’s best musicians.

No amateur could have written these pieces. Far from the short, simple tunes you might have written in high school music theory classes, these works are full-fledged, passionate, and experimental. The compositions shared many of the same complex musical elements: dissonant chords, moving dynamics, intricate rhythms layered on top of each other. But beyond these similarities, each piece showed a deep understanding of the technical capacity and emotional power of music.

As the opening piece on the program, Shield’s “Catharsis” got the evening off to a dark and chaotic start with crashing cymbals, sinister strings, and blaring brass. Despite the ominous tone that carried throughout, the piece had some truly beautiful moments: Warm, haunting solo lines staggered throughout each section for a rich layering effect.

Following Shield’s piece, master’s student in composition Hanna Kim’s work was titled “The Passion and Resurrection of Jesus Christ.” But far from the “Ave Maria” you might expect, the piece opened with a cacophony of clashing, unnerving percussion — evoking Jesus Christ being nailed to the cross — and a ghostly sliding sound as the violinists ran their fingers up and down the fingerboard, barely scraping the strings.

These outlandish musical elements created an eerie, disturbing effect to portray Kim’s vision of the death and resurrection of Jesus Christ. Kim’s religious fervor was especially apparent at the end of the piece as the dynamics rose to a magnificent fortissimo; it was one of the few majestic moments of the concert when the orchestra’s sound was able to fill the entirety of the immense hall.

With such technically and rhythmically difficult pieces on the program, the orchestra had quite a challenge. Although some moments in the performance were stronger than others, the orchestra met this challenge with grace and skill, showcasing the collective technical skill of its members.

In terms of venue, Soldiers & Sailors surely held significance for the student composers and the orchestra, but it seemed a poor acoustic choice. The space was so large and open that the high ceiling swallowed up much of the sound, especially in the string sections. Considering how sparse the audience was — there were only about 50 people in attendance — it seemed hard to justify using such a huge space.

When the audience members returned to the hall, they were in for a fascinating second half of the program: Both senior composition major Sean Burke’s “Noir” and Artist Diploma student Jakub Polaczyk’s “Squirrel Ball with Major F” were chock full of eclectic musical elements.

The opening of “Noir” is a push-and-pull between the rhythmic, lulling undertone and the heralding trumpet and snare drum that cut through the strings. Burke did an interesting job of blending incongruous musical elements: In the program, he describes the work as “an episodic dialogue between two main stylistic themes, neoclassical orchestration and jazz harmony and melodies.” Though the result was not seamless — the jazz elements were inevitably a bit jarring — Burke was able to merge the two themes in an interesting and experimental way.

Polaczyk’s “Squirrel ball with Major F” built further on this loud-soft dichotomy. This piece is characterized by several eccentric touches — a strange, deep, drilling noise issuing from the contrabassoon and a sequence of haphazard pizzicati in the strings. And as a playful and quirky conclusion to the piece, several members of the orchestra reached into their pockets and sent ping-pong balls quietly clattering across the stage — cued by the conductor playing a pair of finger cymbals.

The concert was a magnificent display of the talent of student composers at Carnegie Mellon. With the level of complexity of each piece, it was hard to believe that students could approach their music with such ingenuity and skill.

According to Shield, he owes much of that skill to the Carnegie Mellon School of Music. After coming into the program with what he calls a “generic John Williams sound,” he quickly matured into a more complex and ambitious composer: “[The program] dramatically opened my eyes to what was possible.”

And speaking of possibilities, Shield has a wide range to choose from in his future ahead. In the immediate future, he plans to attend the Berklee School of Music’s master’s program in Valencia, Spain, which teaches scoring for film, television, and video games. Ultimately, Shield wants to write music for movies and video games.

For Shield, and surely for the other three composers as well, Friday night was “many years in the making.” Despite the modest attendance, the composers’ pride was visible and well deserved; the true pleasure of Friday’s performance lay in witnessing the fruits of their hard labor and sharing the concert space with such musical talent.