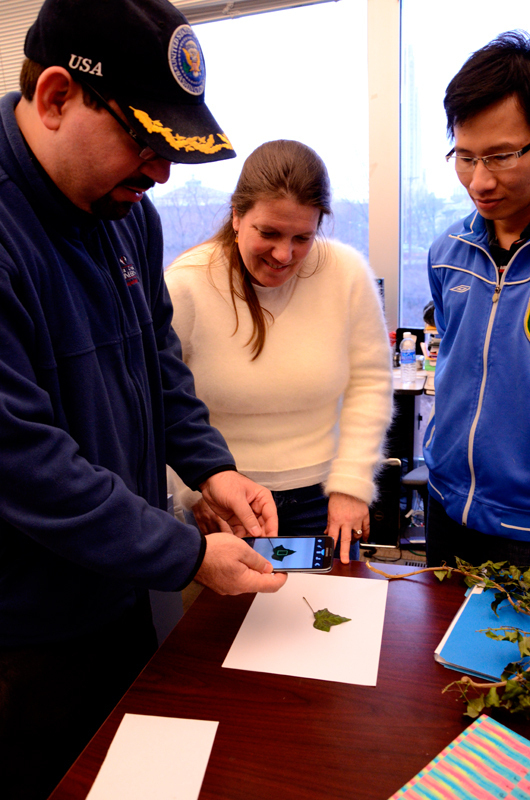 Marios Savvides, left, and Cynthia Morton, center, are working on an app that will be able to recognize poisonous plants. (credit: Kate Groschner/Photo Editor)

“If you call the Poison Control Center and say: ‘I’ve eaten a poisonous plant, help me,’ they basically go through five volumes of books to figure out what you’ve eaten.”

These are the words of Marios Savvides, an associate research professor of electrical and computer engineering and the director of the CyLab Biometrics Center. Savvides and Cynthia Morton, the head of the Carnegie Museum of Natural History’s botany department, are developing a single digital database for identifying all poisonous plants. This database will aid in the treatment of hikers or passers-by who suffer from symptoms after coming in contact with poisonous plants.

The two researchers had known of each other before this project: Morton knew that Savvides had worked with facial recognition, so she wanted to apply that capability to a project involving plants. The result will be a smartphone app that that can identify a plant based on its appearance and provide the plant’s toxicity, symptoms that appear after contact, and remedies for treatment. From just a snapshot, the app will be able to detect anything from a weed on the side of a hiking trail to potted houseplants bought from Home Depot.

The two scientists have collaborated with the University of Pittsburgh Medical Center (UPMC) and the Poison Control Center, which currently use a medical toxicology book and the Micromedics database, UPMC’s medical database for poisonous plants. The current system is missing 60 percent of its database, including symptoms and images. Therefore, doctors are only able to recall information about each plant, but cannot immediately recognize a plant from a victim’s symptoms. This inefficient process of scrutinizing plant references delays the time required for optimal treatment.

From the medical toxicology books’ and Micromedic’s combined database, Morton and Savvides are able to mine out the 32 most commonly reported plants. As of right now, the app is only able to detect 10 of those plants, but the two are expanding the app database to allow it to recognize dangers beyond the 32.

“For many plants — some massive, some poisonous, or both — this is a good tracking mechanism to see what’s going on because a lot of these are not native to here. So, it’s giving us a wealth of information on a variety of different levels,” Morton said.

Soon the app will be able to detect the location of a poisonous plant and update the information on an online social networking system. Before advancement to the next step, the two scientists need to wait for UPMC’s approval on the proposal to fund the rest of the project. In addition, patients have also requested for the app to include certain poisonous mushrooms and hallucinogens.

So far, Morton concluded that the toughest part of the project involved hand collecting live specimens of the plants, organizing them by different colors and features, and taking 50 to 100 pictures of the same plant from different angles to help the app to recognize it.

Funding for the project came from the UPMC Healthcare Innovation Technology Grant program, which is a collaboration between Carnegie Mellon and UPMC. During the project, the two scientists also enjoyed learning more about the other’s specialization. Above all, they are proud to come up with a product that helps people.