Abhishek Alla unique on and off the tennis court 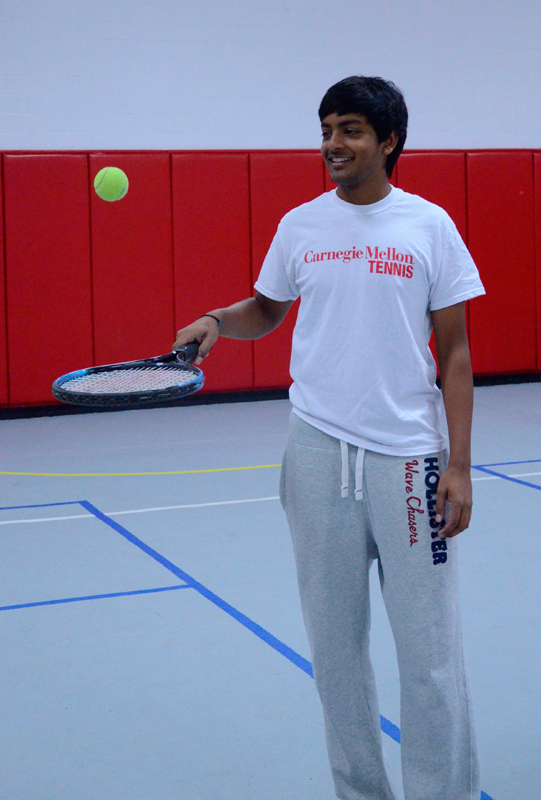 First-year Abhishek Alla — known as “Shek” — although far from his home of Hyderabad, India, has served up a series of wins and greatly contributed to the undefeated Carnegie Mellon men’s tennis team.

Most recently, Alla was named the University Athletic Association (UAA) Athlete of the Week for his performance the weekend of Feb. 16–17. Alla helped lead the Tartans to victory with his 2–0 dual-match record against some of the team’s toughest competition to keep the team at an unbeaten 6–0.

Alla posted a 2–0 mark in singles play. He started the weekend with a straight set victory at No. 3 singles, 6–1 over Matt Romei of Haverford College, and then turned in another straight set victory with a 6–4 win at No. 2 singles against Matthew Heinrich of the Stevens Institute of Technology.

“I think that, in addition to my 4.0 for the last semester, the last two matches have been the highlights of my college career so far,” Alla said.

The Tartans recently defeated big rivals such as Amherst College, which Alla said has been “[the] greatest accomplishment thus far this season.”

Alla is certainly no stranger to the sport of tennis, having played for 12 years. He values the traveling involved with the sport and the opportunity to “meet new people.”

“Abhishek’s game style is very unique and he understands tennis very well,” senior teammate Duke Miller said. “He is good at finding weaknesses in players and knowing how to use those weakness to win. Playing against Abhishek can be very confusing and frustrating for other tennis players.”

“Abhi has a very cool demeanor on the court. He doesn’t allow worries to get in the way of his abilities and naturally maintains a positive mindset, a trait that puts the whole team at ease,” sophomore teammate Bryce Beisswanger said.

Besides tennis, Alla enjoys watching movies and participating in activities sponsored by the Mayur South Asian Student Alliance, such as the recent MayurSASA dance show.

Of course, his civil engineering major keeps him busy with challenging coursework.

“Physics kicks my butt, and I plan to take Physics II at the [University of Pittsburgh] this summer,” he said. “Other than that, I can’t complain.”

Despite the adjustment to college life, Alla said that the “transition into college tennis has gone well.”

“The team has really been a big part of this adjustment. They’re just a funny group of characters,” he said.

His teammates feel the same way about Alla. “He is one of the most entertaining people on the team,” Miller said. “He is able to talk about school and tennis and doesn’t take anything too seriously. He always seems to be enjoying himself and having a good time as well, whether during matches, practice or workouts. He is good at speaking his mind and being very direct with people, which is often really funny.”

His antics are well known among the tennis team. “Abhishek thought it would be funny to pack a bag within another bag on our most recent trip to Philadelphia,” Miller said. “Everyone else was really confused, but he found it hysterical.”

“Shek always has a song in his head when he’s playing,” Beisswanger said. “Often a lot of players do the same but he surprised me in the fall when we played doubles together and following a missed shot he sounded of the chorus of ‘Don’t You Worry Child.’ ”

Alla emphasized the close-knit atmosphere of the tennis team, shown by their use of “meta-language.”

“I can’t even really describe the [meta-language],” Alla said. “It’s our own secret code.”

In addition to an enjoyable team atmosphere, Alla cites the proximity to family in the Pittsburgh area as a favorite part of Carnegie Mellon, as well as another factor in helping him adjust to college life.

“It’s great to be able to get some delicious Indian food,” he said.

All settled in, Alla now sets his sights on his ambitions. “I want to be an All-American and compete at NCAAs.”

His teammates believe these goals are well within reach for Alla, whose fierce playing style and sense of humor continually surprise them. “He has a really funny style of playing so it’s hilarious when he starts playing and everyone is shocked. Abhishek is simply incredible,” first-year teammate Yuvraj Kumar said.