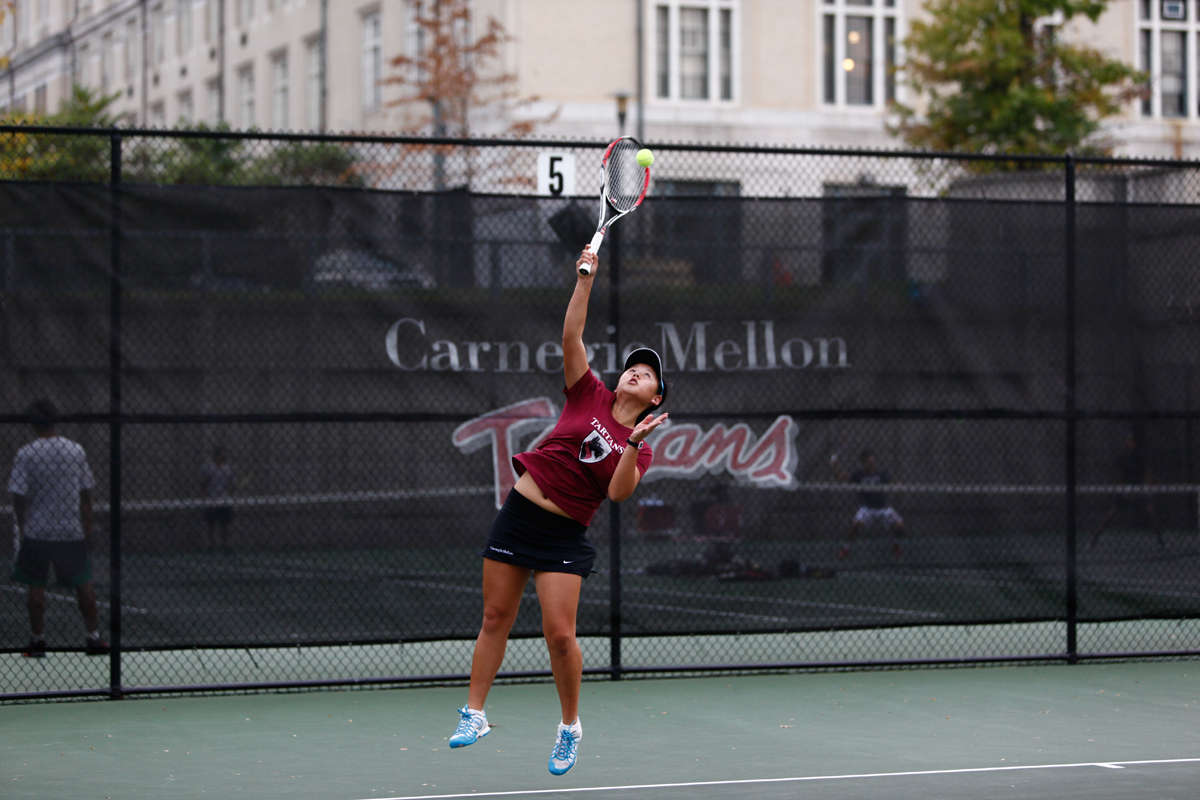 First-year Brooke Tsu was a major asset in the doubles play during the ITA Championship this weekend. (credit: Jonathan Leung/Assistant Photo Editor)

The Carnegie Mellon women’s tennis team traveled to Greencastle, Ind. this weekend and advanced to the final match of the International Tennis Association (ITA)’s Indoor Championship, where the team suffered a tough 5–4 loss to the Johns Hopkins University Blue Jays.

Their advancement to the final rounds of competition on Sunday was not a novelty for the fifth-ranked Tartans, who won the inaugural championship in 2009 and were runners-up in 2011.

The Tartans immediately established their competitiveness and dominance in the competition, first advancing to the semifinals on Friday.

The Tartans started the match with a sweeping double play. Senior Alex Tapak and first-year Brooke Tsu opened with an 8–1 win at No. 3 doubles.

Junior Katie Cecil and sophomore Angela Pratt doubled up to claim the Tartans second point with an 8–4 win at No. 1, followed by a 8–3 doubles win by sophomores Bryn Raschke and Chelsea Motie.

“The doubles did an excellent job this weekend,” Pratt said. “I look forward to more of the spring season.”

In singles play, Cecil and Motie won in straight sets at No. 1 and No. 2, respectively, to seal Tartan victories.

On Saturday the Tartans came away with an 8–1 victory over the Trinity University Tigers to advance to the national final match for the second consecutive year.

The lineup was similar to the previous day and featured wins by pairs Raschke and Motie in addition to Cecil and Pratt.
Motie and Cecil also won their singles matches, while first-year Elizabeth Martin sealed the match for Carnegie Mellon with a win inthe No. 3 singles.

Success did not stop there for the team, as Tsu and first-year Abbey Hamstra capped off the night with singles wins as well, marking the fifth straight set with a total of six singles wins for Carnegie Mellon.

On Sunday, the Tartans started strong with two wins in doubles: an 8–2 win by Raschke and Motie and an 8–5 win by Cecil and Pratt.

The team was ahead 2–1 going into singles play, but unfortunately, the Tartans did not fare as well in the singles part of Sunday’s competition.

Ultimately, the two singles wins by Motie and Cecil were not enough to carry the Tartans.

Despite their final losses in the singles matches, the Tartans were still proud of their overall performance and thankful for the time to bond together during the long weekend.

“I had an awesome time this weekend,” Tsu said. “Especially listening to Justin Bieber with my teammates.”

The Tartans and the Johns Hopkin’s Blue Jays will meet again on March 31, when Carnegie Mellon will travel to Johns Hopkins for a 12 p.m. match.

Editor’s note: Alex Tapak and Elizabeth Martin are staffwriters for The Tartan.