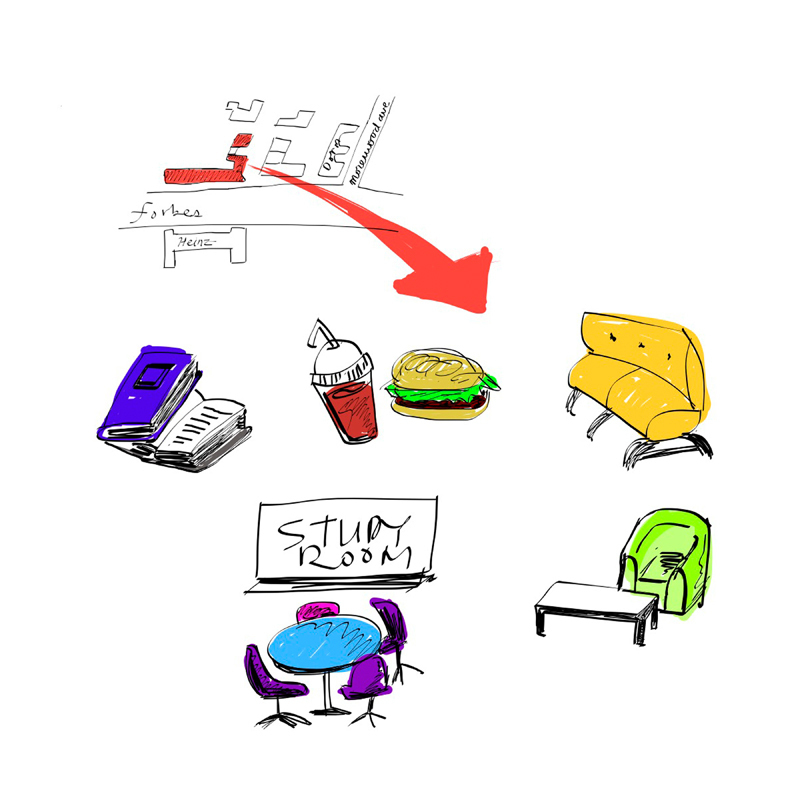 The Tepper School of Business may be expanding in the not-so-distant future. On Sept. 23, an undergraduate student town hall meeting was held to discuss preliminary plans for a new, larger building on campus devoted to the school.

Consultants from Brightspot Strategy, led by founder Elliot Felix, delivered a presentation in Posner Hall’s Mellon Auditorium that aimed to get input and reactions from students about the company’s design requirements brief draft for the new building.

According to a written design brief draft from Brightspot, “In 2010, the Tepper School engaged the architecture firm Kohn Pedersen Fox (KPF) to plan for its expansion and relocation, including selecting a site on the Morewood lot across Forbes Avenue as well as determining an initial program of spaces and building massing concept.”

Three years later, this collaboration with Brightspot is continuing with an update to KPF’s work by creating a “future design that quantifies and relates the components of the building.” The document and Felix’s presentation suggest that there have been various complaints about the present facilities used by Tepper, including that Posner Hall does not create an ideal or convivial atmosphere for students; that there is little “flexibility to accommodate change;” and that there is not enough space designated to the school in terms of classrooms, communal areas, and larger spaces for events.

The design requirements brief draft states the new Tepper building will be located near Hamburg Hall, in the area next to Forbes currently used as Morewood Gardens parking lot. The future building is envisioned as being part of the “new generation” of Carnegie Mellon, with other buildings also expected to be built in the area.

Felix and Brightspot envision, with the advice of students and faculty, a new building that showcases a pride in Tepper and its entrepreneurial initiatives.

“It will be a game changer,” Felix said. Another focus brought up during the town hall meeting was that the new Tepper should be “inclusive of undergraduates.” A complaint brought up by students was the divide between the undergraduate and graduate business cultures.

Students also mentioned how currently, Tepper students are forced to have classes and business club meetings in other buildings such as Wean Hall, because Posner does not have enough rooms to accommodate its business population. “The hope is that we can accommodate many undergraduate business or economics classes,” Felix said.

There are currently preliminary plans on the layout of the building. Felix stated it might be as high as eight stories, with a lobby and a public area on the first floor. The floors would progressively get more private the higher they go, with the eighth floor containing faculty and Ph.D. work space. It’s undecided if a corridor (similar to those in Wean Hall) or suite structure (similar to those in Warner Hall) will be used for faculty office spaces. There are plans to incorporate various types of rooms, such as “breakout rooms” that have eight seats, Wi-Fi connection, and whiteboards on two walls; flat, flexible classrooms with 60 seats; and auditoriums with more modern seating arrangements.

The plan is to have two dining spaces, one possibly a coffee shop and the other a meal-oriented area. There were other ideas tossed around, including having a library space, lounges for students, research centers, a fitness area, a book store, study spaces, and even a space devoted to entrepreneurs; feedback is needed for many of the plans.

Hue Tran, a sophomore business administration major who attended the event, is enthusiastic about the new building. “Well, I am most excited about the fact that there will be many more rooms designed for students to practice and brainstorm for various events like case competition and class presentation,” Tran said. “This will significantly improve their performance since it is much easier for them to practice now. The extra space from the new building [would] also make students want to stay there longer, creating a stronger sense of Tepper community.”

Sophomore economics major Jobert Sauray, thinks a new building is a good idea. “I’m planning on switching to Tepper, so it would be good,” he said.
The planning for the new Tepper building is in a fluid state, and Brightspot wants input from students and faculty. “Over the next month or so, we will respond to the feedback, finalize the design brief, and use that as a basis for picking out an architect,” Felix said.

Comments and opinions on the plans to expand Tepper can be submitted at http://bit.ly/newteppercomment.