From the African savannah to Pittsburgh's Benedum Center: The Lion King 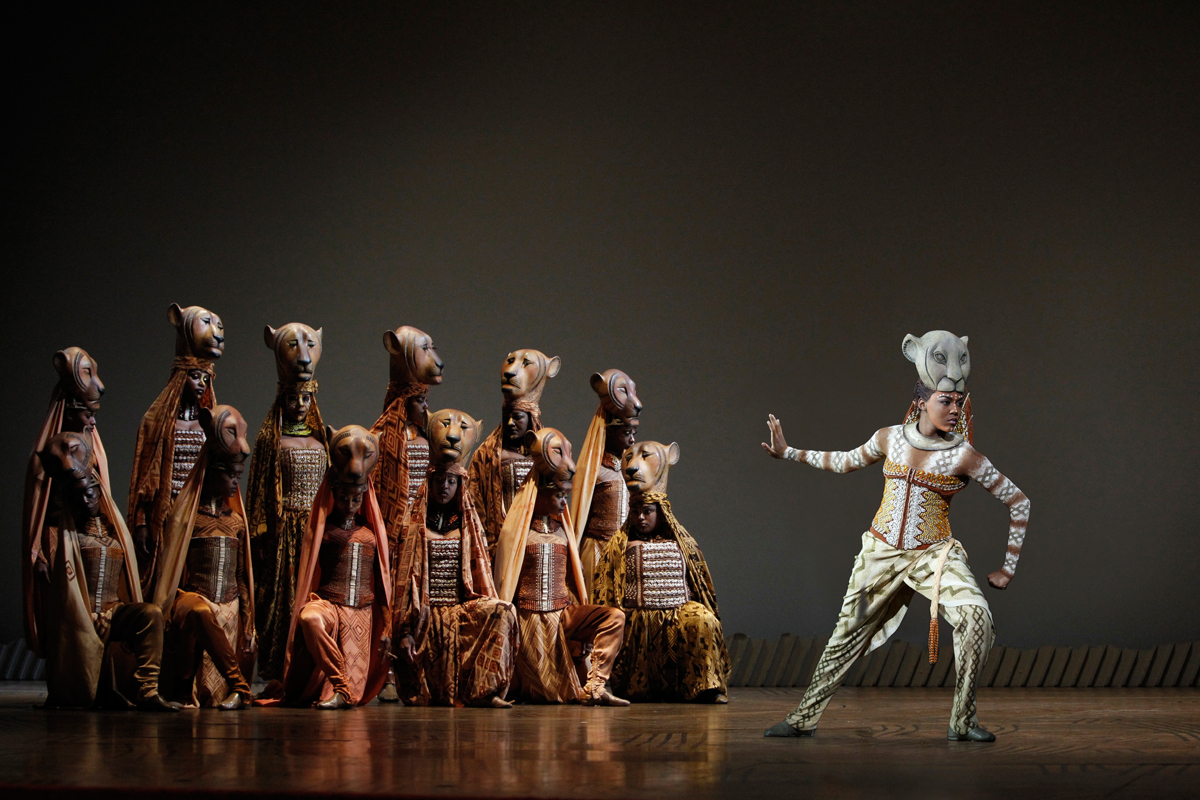 Nala, played by Nia Holloway, stands with an ensemble of her fellow lionesses. (credit: Courtesy of Joan Marcus) 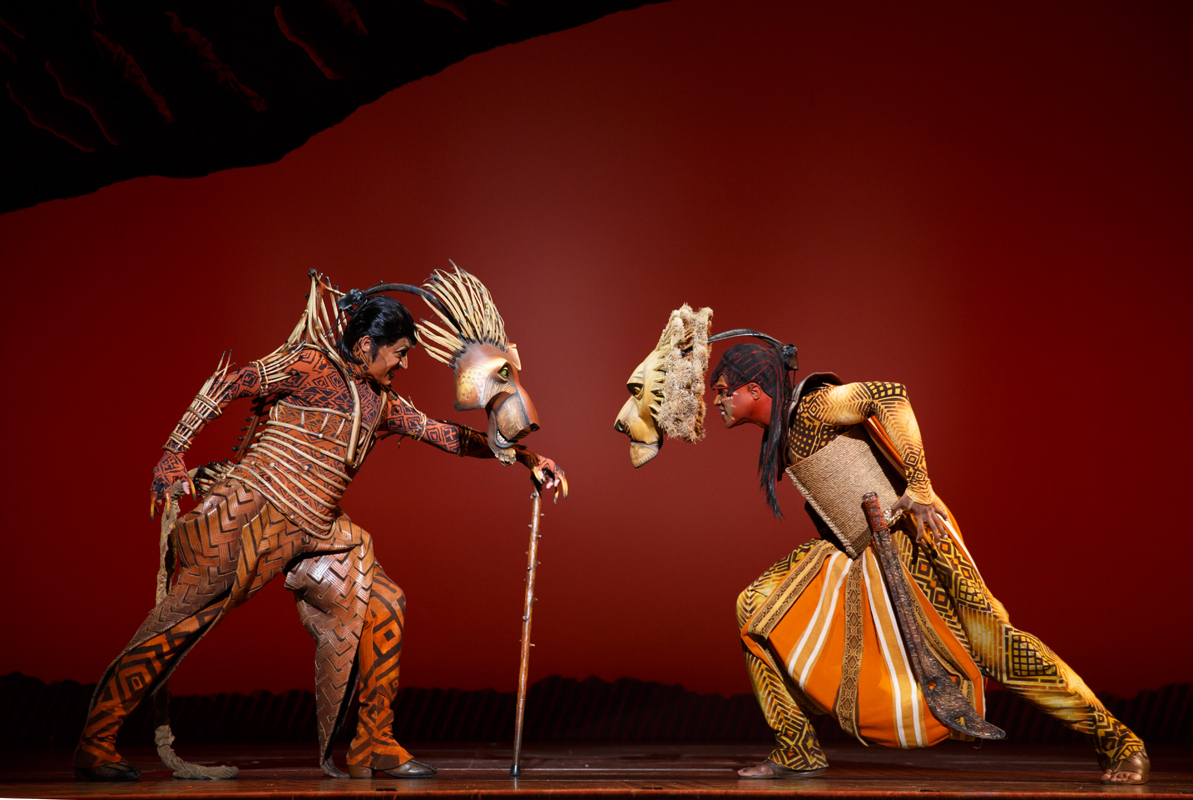 Scar (left, played by Patrick R. Brown) and Mufasa (right, L. Steven Taylor) face off in the Broadway Across America production of The Lion King. (credit: Courtesy of Joan Marcus)

With the classic opening notes that have been so deeply ingrained in so many childhoods, the musical rendition of Disney’s The Lion King roared into the Benedum Center. The show, which will run until Sept. 29, is arguably one of the most celebrated musicals ever to grace the Broadway stage.

According to a Pittsburgh Cultural Trust press release, The Lion King has toured in 70 cities across the United States — but that’s one of the least stunning statistics about the show.

The press release goes on to describe how The Lion King has been performed for nearly 68 million theater-goers across all the continents (except Antarctica) to gross over $5 billion — more than all the Star Wars films combined.

Clearly, this show is doing something right, and it’s easy to see why it’s successful after attending the Sept. 4 show of the current North American production tour. Funded by PNC’s Broadway Across America program, the Pittsburgh Cultural Trust, and the Pittsburgh Symphony, this stop on the tour is the encore performance following the show’s hugely successful 2004 and 2008 runs.

The show was, in a word, breathtaking. From the larger-than-life costumes, to the African drums that beat from either side of the stage, to the moments in which, yes, even as an almost-20-year-old, I was crying, the performance was the definition of a spectacle.

The tour also features Carnegie Mellon alumnus Michael Hollick (CFA ’95), who tours with the show as a standby for Scar — Simba’s cunning and dangerous uncle played by Patrick Brown — and for Pumbaa (Ben Lipitz), the lovable warthog who, with Timon (Nick Cordileone) the meerkat, adopts Simba after he runs away.

After attending the precollege program in 1990, Hollick was offered early admission to Carnegie Mellon upon auditioning for the School of Drama. One of four students admitted that summer, Hollick entered his senior year of high school knowing that he was Carnegie Mellon and Pittsburgh bound.

Hollick loved his time at Carnegie Mellon and credits most of his acting ability to the school’s professors and his peers. “Don Wadsworth is a remarkable teacher who teaches speech and diction, and the things that he taught I still use today. And the thing that’s wonderful about him is that he remains in contact with alums, including me,” Hollick said.

As a standby, Hollick must be ready to fill in for either role at the drop of a hat if the actors are sick, injured, on vacation, or just taking a personal day.

“It’s a lot of pressure, particularly for a production like this one. It’s so highly regarded, and it’s a well-respected performance … in every city we go to, we sell out,” Hollick said. “These are top-tier, amazing performers: You can’t drop the ball.”

Despite the pressure, Hollick always feels prepared to fill in, should the occasion arise: “Fortunately for me, I went to CMU. And that sounds cheesy, but it’s the truth. The fact that I’m able to go on at a moment’s notice.… I rely on a lot of things I learned there to keep my body, voice, and mind in shape to be ready to go on.”

It’s easy to see how the role of a standby for this show could be intimidating. Billed as “the world’s number-one musical,” The Lion King leaves nothing to be desired.

Perhaps the most entrancing part is the entire visual element of the show. Utilizing the entire theater as opposed to just the stage, animal puppets stampeded down the aisles and cloth birds flew jauntily overhead to the amusement of the many children sprinkled throughout the theater.

Much more engaging than the 1994 movie, the musical portrayed the animals in the story through extensive, intricately detailed puppets. The characters and their emotions were surprisingly easy to distinguish and identify based on the masks that the actors wore and the personalities that the performers were able to portray even through the simplest movements.

The masks, puppets, and other details had a distinct African influence that fit in the musical perfectly. African nuances were also woven throughout the music, which heavily featured two sets of bongo drums and tribal chants. Played perfectly by Brown Lindiwe Mkhize, the character of Rafiki — the mystical baboon who inspires Simba to see that his father lives on in his heart — used the African chanting most prominently.

Furthermore, multiple numbers in the show used a simple shadow puppet method of storytelling, while featuring chanting and dancers dressed in colorful, flowy costumes that were expressive and engaging. This was beautifully done and added another cultural element to the show that made it deeper and more meaningful.

“[Elements] were drawn from cultural theater, so in the show, you’ve got all of these different cultures represented. It’s got meat on its bones; it’s not just a frivolous musical,” Hollick said.

Hollick, who previously acted in the Las Vegas show, describes The Lion King as “a phenomenon.”

“It’s risen to the level of classic material,” he said. “You’ve got these intense emotions, quick and hilarious comedy, and then an amazing set and costumes to tie it all together. It’s an actor’s dream job, really.”

The only underwhelming elements in the show were the original songs added to the lineup. In general, the audience seemed less engaged during these unfamiliar songs.

This was particularly noticeable during the beginning of the second act: In the first half of this act, no songs from the well-loved movie were featured. The songs “The Madness of King Scar,” “Shadowland,” and “Endless Night,” were all beautifully sung and choreographed, only adding to the beautiful representation of the destruction of Simba’s kingdom and the peace of the paradise in which he hides. But a restless energy seemed to fill the seats as this new material washed over the audience. After all, when one goes to see a musical based on one of the most adored children’s movies of all time, one expects to experience the familiar, not be introduced to new material.

The lull dispersed, however, the moment the opening notes to Elton John and Tim Rice’s “Can You Feel the Love Tonight” floated out into the jungle night. The song proved to be one of the highlights of the musical, mostly due to the perfect comedic timing of Timon and Pumbaa during the introduction and the synchronous energy that emanated from the ensemble.

From there, the score became the familiar themes that the audience was used to, and the show ended on a poignant note as Simba (Jelani Remy) ascended Pride Rock.

Perhaps the most powerful moment in the entire production was during the reprise of “He Lives in You,” when Simba looks into the water and sees his father staring back at him. The number was beautifully performed, not only by the actors but by the symphonic accompaniment as well, and the representation of Mufasa (L. Steven Taylor) that appeared in the stars was positively magical.

At first, ensemble members merely waved beautiful golden flags shaped like pieces of a face in time to the music. But then, as Simba realized that his father truly lived in him, a regal representation of Mufasa solidified in the night sky, shining down on Simba and the audience. In that moment, it wasn’t just a musical version of the movie I watched with my brother when we were kids.

The Lion King represents the beautiful simplicity of childhood — and that representation, through the musical, will continue to touch the childhoods of many. Hollick encourages Carnegie Mellon students to make the trek down to see the show, saying that it’s an event that will teach everyone a powerful lesson.

“_The Lion King_ will get their wheels turning intellectually and emotionally, relating to the characters. These are human issues and problems, and they’re rich, and CMU students should run down here to get a taste. It’ll enrich them; it will fuel their minds as they wrestle with the issues presented,” Hollick said.