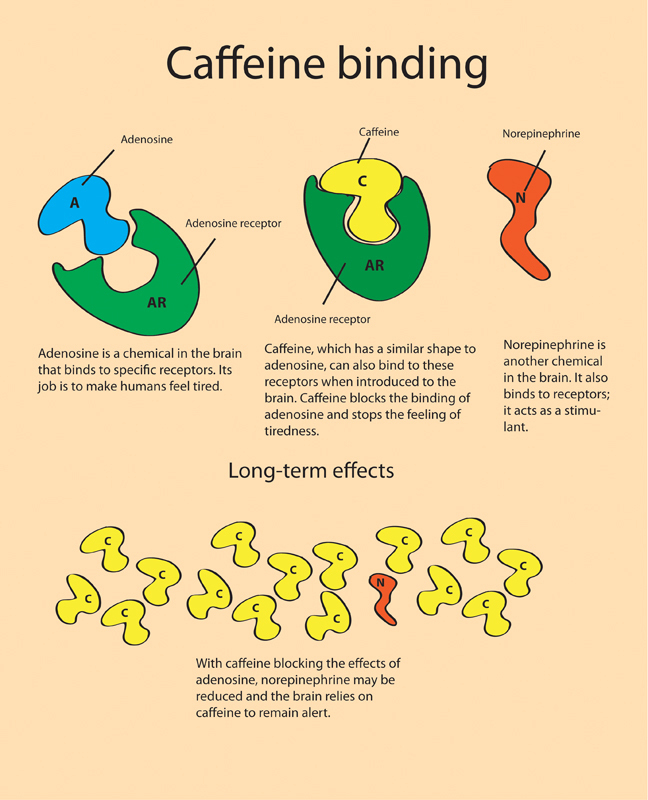 At a school that requires students to spend many late nights working, it’s not uncommon to hear a phrase similar to, “I am so addicted to caffeine! It’s awful.” According to U.S. News & World Report, caffeine is a daily ritual for roughly 90 percent of the American population. It is naturally found in chocolate, coffee, and tea, and is added to sodas, energy drinks, and certain diet pills and medications. Though we are accustomed to having caffeine in our daily diets, it is technically classified as a psychoactive stimulant — it alters the chemistry of the brain, and affects our bodies in more ways than we may know.

Once caffeine enters the body, it is absorbed by the small intestine and enters the bloodstream. Since it can dissolve in both water and fat-based substances, it can pass through the blood-brain barrier to enter the brain, according to howstuffworks.com.

The brain naturally contains the chemical adenosine — which is responsible for making us feel tired — and norepinephrine, a stimulant. When unaffected by caffeine, the brain has a certain amount of receptors for each of these chemicals to bind to in order to maintain the body’s normal cycle of lethargy and alertness.

Caffeine alters the activity of these receptors, largely because of its close resemblance to adenosine. Once caffeine enters the brain, it is recognized by brain receptors as adenosine, and is able to bind to the adenosine receptors. Through this process, caffeine essentially stops adenosine from locking into the brain’s receptors and slows down nerve cell activity. In turn, the sudden increase in brain activity triggers the adrenal glands to produce more adrenaline. As a result, caffeine produces a feeling of alertness that usually lasts from four to six hours — until the caffeine is metabolized. After long-term exposure to caffeine, the brain increases production of adenosine, and decreases production of the stimulant norepinephrine to maintain equilibrium with the caffeine intake. Caffeine’s ability to alter the brain’s chemical production is the root cause of both its adverse and beneficial effects on the body.

Because caffeine blocks adenosine from binding to receptors and slowing down nerve activity, it hinders the body from going into deep sleep, according to Smithsonian Magazine. Long-term use causes a cycle of sleep deprivation. The lack of deep sleep, combined with decreased production of norepinephrine, causes the body to become increasingly dependent on caffeine to remain alert. Therefore, regular caffeine consumers begin to experience withdrawal symptoms after 12–24 hours without consumption. Common withdrawal symptoms include fatigue, headache, difficulty focusing, and depression. Though consuming two to four cups of caffeine per day is generally considered harmless, research has shown that people are likely to build up a tolerance for caffeine after two weeks to one month of consuming it regularly. Fortunately, in most cases, caffeine addiction is not difficult to overcome. After seven to 12 days without caffeine intake, the brain’s production of adenosine and norepinephrine return to their base levels.

The effects of caffeine are not entirely detrimental. Because caffeine blocks adenosine from binding to its receptors, it reduces the risk of developing Parkinson’s disease and is currently being researched as a treatment option.

In addition, caffeine naturally contains antioxidants and can therefore reduce the risk of contracting diseases such as liver cancer, colon cancer, and diabetes. It can also treat migraines by constricting the brain’s blood vessels. Aside from medical benefits, certain studies show that adults consuming the equivalent of caffeine in one cup of coffee were better able to perform problem solving tasks.