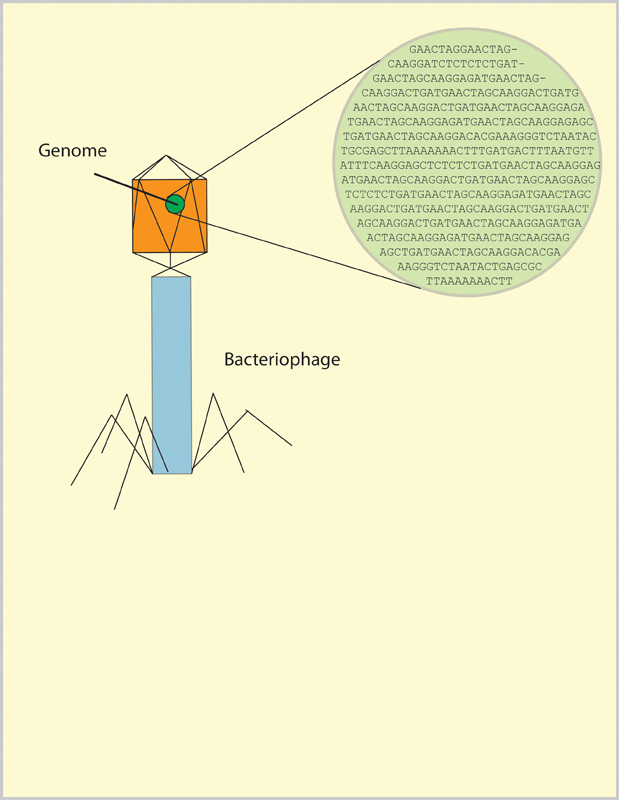 Students in the phage genomics course have the opportunity to sequence the genomes of a bacteriophage, shown above. The phage’s DNA is made up of a long string of base pairs, represented as A,T,C, and G. (credit: Michael Setzer/SciTech Editor)

Imagine you’re sick. What if your doctor told you that the only way to cure your sickness was by injecting you with millions of viruses? This treatment could be a reality in the next decade, with the growing re-emergence of bacteriophage research and medical therapy.

Named from the Latin root “phage,” which means “to eat,” bacteriophages — also called phages — are viruses that systematically infect and kill bacteria. While they were discovered and used to treat previously incurable infections in the’20s and ’30s, they were abandoned as a remedy after the discovery of antibiotics in the ’40s. However, with increasingly pervasive antibiotic-resistant bacteria, doctors throughout the world are reviving old bacteriophage practices.

Each phage targets a specific strand of bacteria to use as a host. After identifying an accommodating host, the phage injects its genetic material into the bacterial cell, hijacks the machinery of the cell, and converts it into a phage production factory. In this way, the phage helps itself by reproducing and helps humans by eliminating the targeted bacteria.

With the emerging field, faculty at Carnegie Mellon partnered with the Howard Hughes Medical Institute to offer the Phage Genomics Research course to undergraduate first-years from the Mellon College of Science. With the overarching vision of learning more about bacteriophages, the Howard Hughes Medical Institute is working with almost 90 other universities to put on this course.

The course exposes students to research by sending them on a phage hunt. Students have the opportunity to find their own unique phage, sequence its genetic material, name it anything they would like, and publish their phage to a growing database of bacteriophage species. Because phages exist everywhere in the world, students collect a sample of soil from their hometown and bring it with them to Carnegie Mellon. After isolating the phage from the soil through experimental techniques, students use computational methods to sequence its genetic material.

“We are the only institution, of the 87 schools that offer this program, that has our students sequence the DNA of the phages,” said Maggie Braun, one of the course’s teachers and Carnegie Mellon’s assistant head for undergraduate affairs at the Mellon College of Science.

After naming and publishing their results, the students have an opportunity to partake in a group project where they can explore and research any aspect of the phage they wish.

“The biggest thing that I see students get out of the course is making connections between what they heard about in their classes and actually putting those things to use in a lab,” Braun said.

The research course goes beyond introducing students to lab work. Phage research has enormous potential in the field of medicine. Jennifer Huang, a first-year biology major currently taking the course, said, “The phage course is very exciting because it exposes us to research in an emerging field that has intriguing questions yet to be answered.”

There are hundreds of thousands of phage species still to be found, and every additional phage adds to the growing body of research. According to Braun, every student that takes the class has discovered their own unique phage.

Though each student’s work might seem insignificant on the grand scale, people one day might be treated and cured by a phage analyzed by a student at Carnegie Mellon.