Once a fantasy, self-driving cars are close to reality 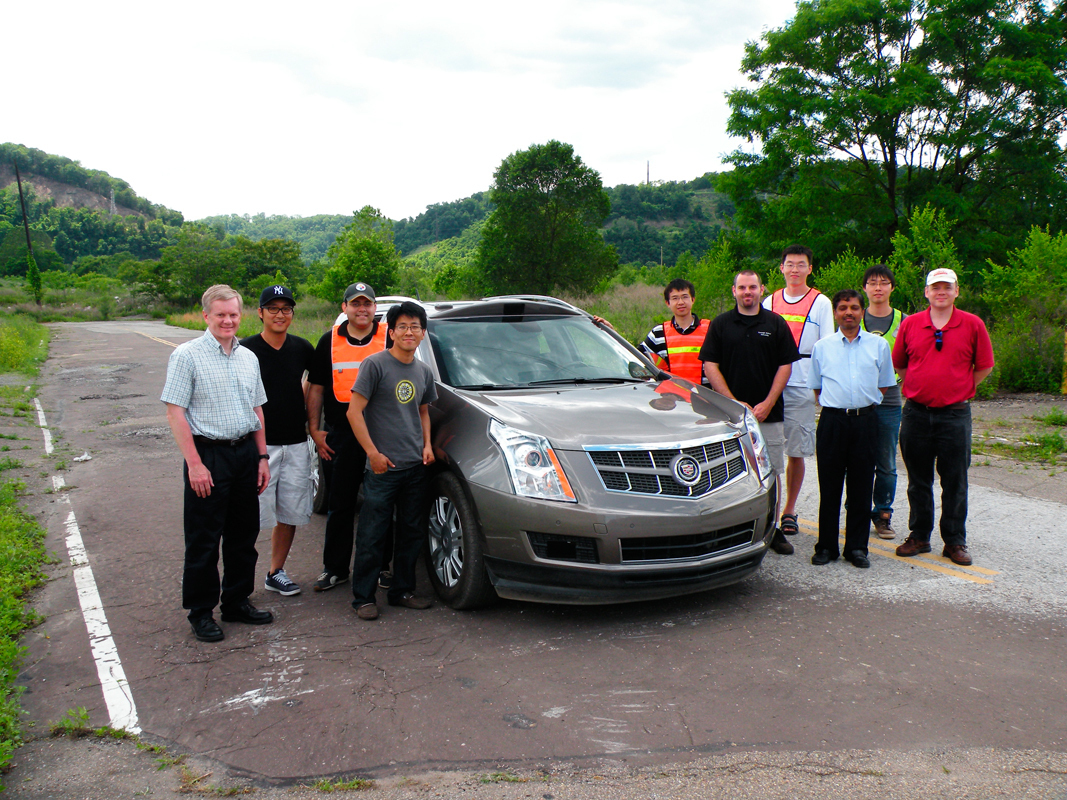 Imagine a future in which you could get in your car, enter your destination in a GPS, and sit back and relax as your vehicle transports you without so much as your finger on the wheel. Well, there’s no need to imagine — that day is already here. A 15-member team at Carnegie Mellon University, consisting of faculty, full-time research staff, post-doctoral researchers, and graduate students worked with General Motors (GM) to develop an autonomous driving car that can navigate through the everyday traffic of the roads of Pittsburgh just as well as — if not better than — any human driver.

Carnegie Mellon has been working in the field of autonomous vehicles since 1986. Raj Rajkumar, a professor in the department of electrical and computer engineering and co-director of the General Motors-Carnegie

Mellon Autonomous Driving Collaborative Research Lab, became involved in 2006. “There was a competition called the 2007 DARPA [Defense Advanced Research Projects Agency] Urban Challenge,” Rajkumar said. “The competition they had was basically making vehicles that can drive themselves in an urban-like setting through a 60-mile course in less than six hours.”

On race day, only six teams successfully completed the course, with Carnegie Mellon in first place for a $2 million prize. “This competition made us realize that automated driving vehicles are no longer science fiction,” Rajkumar said.

GM was Carnegie Mellon’s biggest sponsor for the competition. After Carnegie Mellon’s first-place win, GM decided to invest more in the project and started the General Motors-Carnegie Mellon Autonomous Driving Collaborative Research Lab on campus. The lab continued to work on the vehicle from the competition, which was a 2007 Chevy Tahoe; this huge SUV was completely filled with electronics and looked nothing like an ordinary car. “There were about 20 sensors all hanging around the car, and a huge cylinder on top,” Rajkumar said.

However, in 2011 the group bought a Cadillac SRX, a crossover SUV, right from the dealer’s lot here in Pittsburgh. Rajkumar explained that the car was developed using three subsystems. The first was the sensors: “These are radars, cameras, and lasers, which basically sense what is around the vehicle in terms of obstacles, other vehicles, pedestrians, and bicyclists,” Rajkumar said.

The second subsystem is made up of computers that grab this information from the sensors, process it, and fuse it all together. This is the component that determines the location of objects, the speed at which they are moving, and their direction.

“The third subsystem is called the actuators, which basically applies the brakes, sends gas to the engine, shifts the transmission, puts on turn signals, and turns hazard lights on,” he said. This new-and-improved automated vehicle looks like any car you would find on the road, both on the exterior and the interior.

The main benefit to a driverless vehicle — and one of the motivations for its invention — is that they can potentially decrease the amount of vehicular crashes, most of which are caused by human error. “Humans are extremely smart but can be rather stupid as well,” Rajkumar said in a Pittsburgh Post-Gazette article. “We can be distracted, angry, mad, sleepy, drunk, driving while eating, shaving, applying makeup, and even changing clothes. If we can take the basic human emotional and physical problems out of the equation, we expect injuries and fatalities will go down.”

However, there are also some downsides to an automated driving car that the team is still working on improving. For example, the car lacks the intuition and experience that a human being would possess. When it brakes at stop signs or traffic lights, the action seems abrupt when compared to the way a human driver would slow down gradually.

The car is also unable to characterize the objects it sees the way a person would. The autonomous car has 360-degree coverage, and while humans cannot see past their peripheral vision, the autonomous car can only recognize an object as a person, and can’t differentiate between a child or an older person. It can see signs, but it cannot necessarily read them all. There is also the possibility of sensors failing.

Nevertheless, the future of vehicles has changed with the success of Carnegie Mellon’s and GM’s autonomous car. “The technology [for commercially sold autonomous cars] will be ready by 2020,” Rajkumar said. “But then there is also social acceptance, regulations to put in place, insurance liabilities, and so on, which will take a bit longer.”