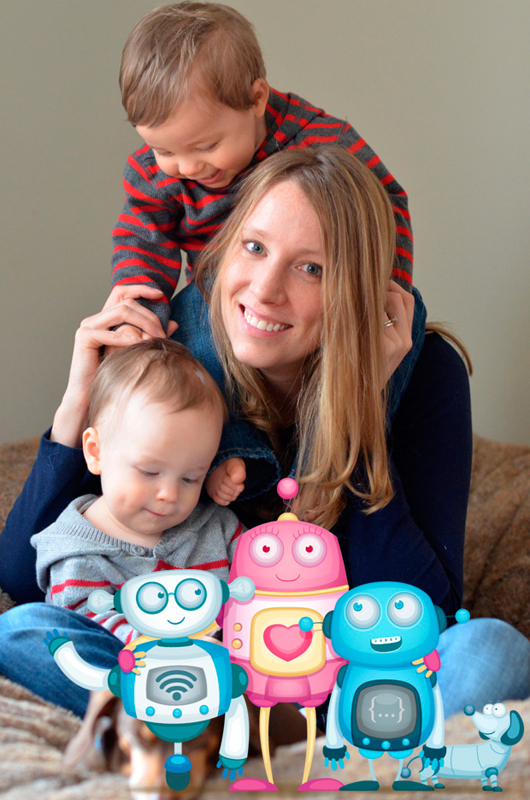 DeLuca and her twin boys pose alongside the characters of her children’s book, A Robot Story. (credit: Courtesy of Lisa Seacat DeLuca)

Meet JSON and WiFi, two fictional robot brothers created by Lisa Seacat DeLuca, a Carnegie Mellon alumna who graduated in 2005 with a degree in computer science. Now a software engineer at IBM, DeLuca is also a mother of twin boys and the author of A Robot Story, a children’s animated eBook and board book that teaches the fundamentals of binary.

A Robot Story is a children’s book written in a rhyming, sing-song voice about two robot brothers who are taught how to count to 10 in binary by their mother. DeLuca
began writing the book last September and currently endeavors to receive funding through a campaign on Kickstarter, a website that allows innovators to promote their respective projects.

“When I was at Carnegie Mellon, I had to learn binary for computer science and I knew what powers were, obviously, but I didn’t really understand the powers of two in binary and how important they were in computer languages,” DeLuca explained. “I always thought it would be cool to have a ‘how to count to 10 in binary’ kind of book for children and I just had twin boys a year ago, so I decided to write it!” DeLuca cites statistics on her Kickstarter website that emphasize how computer science is becoming an increasingly essential part of our lives and a large part of our children’s futures. “Children are genetically programmed to learn language, so why not start them early?” DeLuca stated on her website.

A Robot Story will use an on and off switch to represent 1s and 0s, the building blocks of binary. In the eBook version, young children will be able to turn these switches on and off to see how the animations on the page change with each different input. Each page will include four switches, and on the last page, the readers will be able to change more than four switches at once and observe how having more 0s and 1s allows for the conversion of a decimal equivalent beyond just zero to 10.

The process of creating this animated eBook is more complicated than it may seem. Illustrations of the robot characters were done by Constantine Petkun, a freelance illustrator from Latvia. She created these illustrations in Adobe Illustrator and created the animations using Adobe After Effects. However, because DeLuca wanted the book to be interactive, she could not simply export these animations as movie files. “When a user clicks on a certain part of the screen, I wanted only that part to animate, rather than play a single file,” DeLuca explained. “So for that reason, I had to break the big animation up into a bunch of smaller animations and the best method I found to animate the smaller items was PNG sequences.” Once the animations were broken down into individual PNG files, she could make them appear animated using JavaScript and CSS.

“It’s pretty cool because when I was looking to do this, I couldn’t really find any resources on anyone who had done something similar,” DeLuca said. “So hopefully this will help other people make more animated eBooks.” According to the Kickstarter page for A Robot Story, DeLuca will upload a video that explains the animation process in greater detail, as a reward to her backers for helping her reach $5,000.

Another interesting aspect of DeLuca’s project is the open source technology that the book is made with, called Apache Cordova. This technology is a set of device APIs (application programming interface), which allow someone who is developing a mobile app to build the app without using any native code, such as Java or Objective-C. Instead, the app can be created using just HTML, CSS, and JavaScript. “I’m actually a committer for Apache Cordova,” DeLuca said. “As part of my day job at IBM, I get to work with open source technologies, and Cordova is one of them. As a committer, I’m able to influence the project and deliver changes without the typical review stream.”
Even though A Robot Story requires an extensive comprehension of computer science to produce, it teaches children how to count to 10 in binary simplistically. It is the first book of its kind on the market, and it is only fitting that an alumna of Carnegie Mellon’s renowned computer science program would be the one to write it.