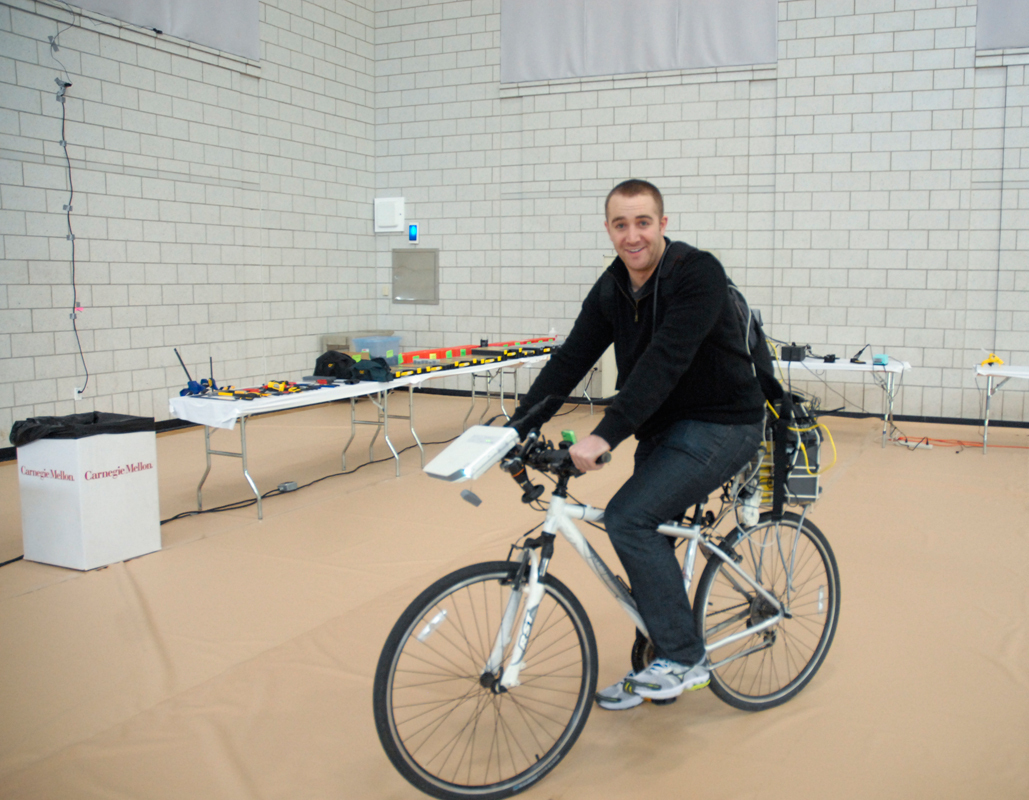 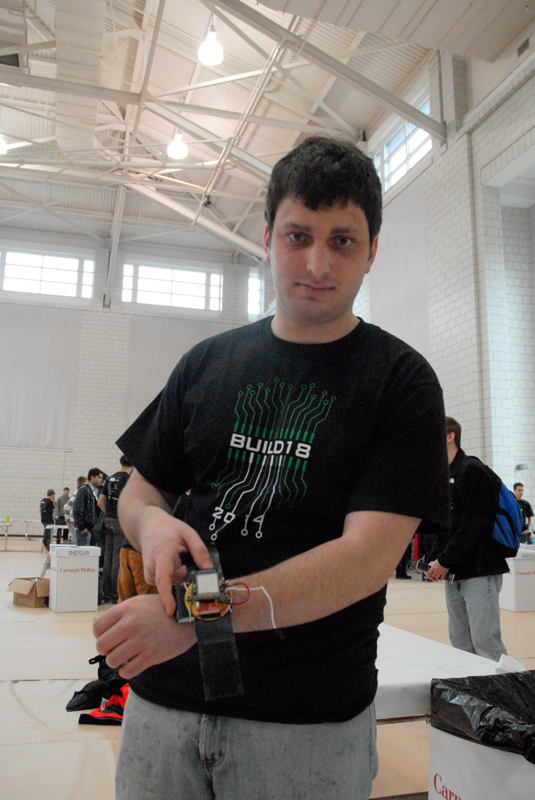 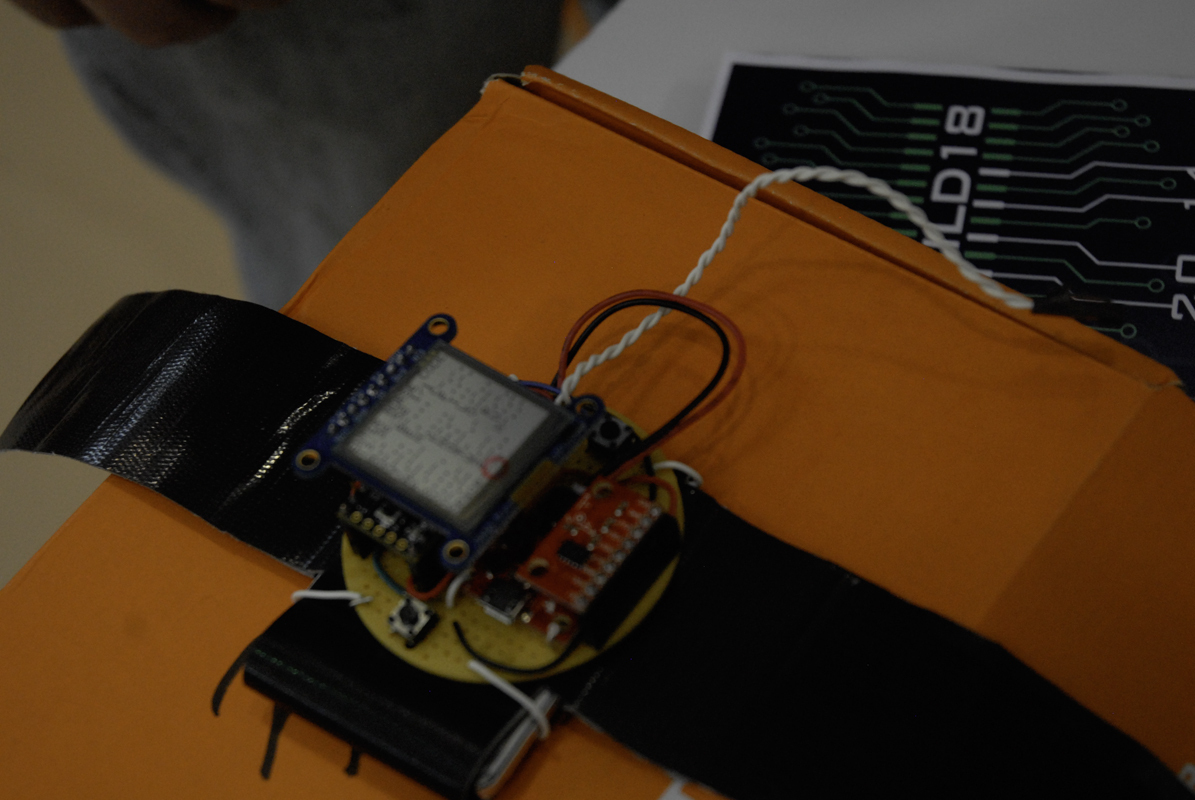 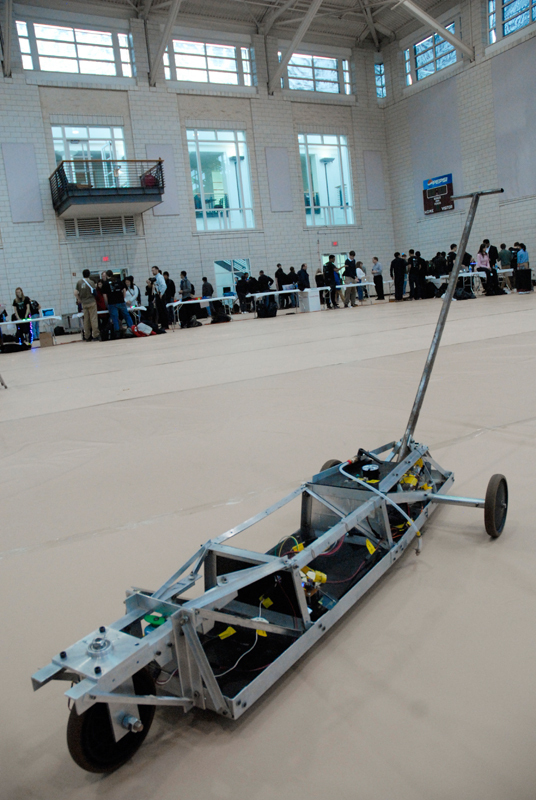 After a week of work, students who participated in the Build18 engineering festival met in Wiegand Gym this Friday to display their creations. Build18 is an annual event held by the electrical and computer engineering (ECE) department, in which teams of students are given one week and $250 to build anything from 3-D printers to remote-control buggies. Sponsored by over 15 companies, most notably General Motors and Boeing, the festival is in its sixth year, with 75 teams participating. Any student can participate as long as at least one member of their team is an ECE major, according to an article published in the Pittsburgh Post-Gazette. Below are descriptions of a few select projects that appeared during this year’s event.

Members: Junior ECE major Spencer Barton, music and technology master’s student Muhammad Haris Usmani, HCI master’s students Austin McCasland and Andre Le, and Tangible Interaction Design master’s students Mauricio Contreras Hernandez and Jake Marsico.
Description: Inspired by a project by assistant professor of art Ali Momeni, the members of Pittsburgh Art on Wheels created an enhanced bicycle that has the ability to project the view from behind the rider onto the pavement in front of the bicycle. This tricked-out ride also includes a proximity detector near the back bumper to detect vehicles that approach from behind. The creators touted features like a game where the tilt of the handlebars controls virtual box stacking that helps the rider steer straight, as well as a router to make the bicycle a Wi-Fi hotspot. Barton says that future improvements to the bicycle will include scaling the size of the components, such as the front projector, to reduce weight and give the bicycle better balance.

Members: Senior ECE majors Eli Murphy-Trotzky and Pronoy Biswas.
Description: For this year’s Build18, Murphy-Trotzky and Biswas developed the Wikipedia Watch, which has an e-ink LCD hybrid display and uses Morse code to search for Wikipedia articles. The team decided to use Morse code not only to eliminate the need for a keyboard, but also for the technological challenge. Murphy-Trotzky said that in order for the Morse code feature to work, he and Biswas had to program the watch to be able to learn what constitutes a dot or a dash for individual users. Users do not have to memorize Morse code; the home screen displays both the time and cipher, providing the Morse code for each letter. The watch also has an accelerometer so that users can simply tilt the watch to scroll through an article. The watch’s creators plan for the Wikipedia Watch to have an SD card with all of Wikipedia’s web pages stored in text files. Due to difficulties with the SD card reader, only a subset of Wikipedia was stored on the watch for demo day, but the watch was still completely functional.

Members: Senior mechanical engineering major Carl Curran, senior ECE major Haley Dalzell, sophomore ECE and robotics double major Zachary Dawson, junior ECE major Matt Sebek, and junior ECE and engineering and public policy double major Ian Hartwig.
Description: The future of Sweepstakes was presented at this year’s Build18 with a remote-control buggy that requires a remote control operator rather than a driver. The team behind this project is using remote-control operation as the first step in creating a completely autonomous buggy. Dalzell, a team leader on the project, says the idea of an autonomous buggy has been around for about 13 years. However, previous attempts to create a self-driving buggy failed, in part because previous designs relied solely on cameras and image processing to direct the buggy. The current team is hoping to fix those issues by having the buggy use an RTK-GPS system that uses two GPS receivers, one fixed and one moving. This allows for the location to be calculated to within six inches, whereas a normal GPS has an accuracy of three feet. Dalzell says that the team is discussing with the Sweepstakes Committee the possibility of having the buggy debut in an exhibition race this year.

Members: Junior computer science major Tommy Klein, junior ECE major Kevin Dou, and junior math major Zack Greenberg.
Description: The members behind LED Cube Games built upon their 2013 Build18 project by trying to implement a version of the popular game of Snake on an LED cube. The members built the LED cube by connecting rows and columns of LEDs. An Arduino microcontroller — a tiny computer on a single integrated circuit that uses open-source hardware­­­ — was then used to select a row and column that lights up a specific LED, much like specifying a point by a Cartesian coordinate system. The group’s biggest challenge was debugging and determining why certain LEDs failed to light up. Though the full game of Snake was not operational by demo day due to hardware issues, the team did program the cube to have various lighting effects and was able to get the Python code for Snake running.